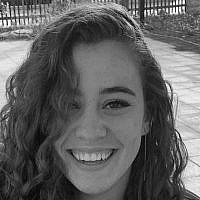 The Blogs
Shani Eichler
Apply for a Blog
Please note that the posts on The Blogs are contributed by third parties. The opinions, facts and any media content in them are presented solely by the authors, and neither The Times of Israel nor its partners assume any responsibility for them. Please contact us in case of abuse. In case of abuse,
Report this post.

My boyfriend likes to be the hero. He’s the type of man that feels obligated to help in a time of crisis. To help me. To grab my arm and drag me towards a Tel Aviv building as a siren blares above us. To push me through the door, into the stairwell and tell me to wait.

At first, I’m one of only a few people in the basement. Hearts beating, fast breathing, we listen silently to the sound of the rockets exploding over our heads. Within a minute forty more people rush in. All of us packed into a small basement with exposed pipes and dead cockroaches. Mismatched puzzle pieces stuffed together and trying desperately to fit.

Yesterday, when the first siren went off, I was in a car. Dressed in a blue dress and donning a pair of completely impractical shoes. My friends and I were on our way to a wedding.

“Is that a siren?” my friend Adina asked.

I didn’t even look up from my phone. The girl beside me just shrugged. Humans have a strange instinct, one that seemingly works against all logic. Don’t be dramatic. Better to assume everything is fine and be proven wrong than assume everything is wrong and be mistaken. Better to stare at my phone than be scared there’s a siren.

Adina opened the window a crack and the noise of the siren filled the car. Now, I looked up from my phone. That was a siren.

“I thought you were supposed to stop.”

“Are you okay?” the girl next to me asked.

The siren kept playing, we kept driving. The ground shook. The sound of the rocket falling was so loud it could be felt in every part of my body. Adina screamed.

“What was that?” she asked. Her voice was breaking.

“But what was that?”

Through the back window a small cloud of smoke could be seen. Rising into the sky in black clouds. Fifty feet away from where we were driving, in the middle of a patch of trees just off the road. The news reported the rocket as falling in an ‘open area’. There were no casualties. Most of the country reads this headline and breathes easy. I know just how close they cut it.

Yesterday after the rocket fell, my boyfriend called me. My hands were shaking.

“You promise?” he asked.

For a man who likes to be the hero, he felt helpless. But today he doesn’t. He moves back and forth between the stairwell and the basement. Speaking in English, French and Hebrew to anyone who needs reassurance. But no Arabic. He has no way of calming the three Arab girls standing in the stairwell.

One of them wears a hijab, the other two don’t. They hold hands while they cry.

“Are you sure?” she asks me. Her Hebrew is broken, and she speaks with a heavy accent.

I’m not sure, I can’t be sure. The sound of the rockets exploding is continuous. The booming doesn’t stop for close to thirty minutes. If I was counting, I’m sure I would have counted well over 50 explosions. But I nod my head and squeeze her arm.

It’s an interesting anomaly. To stand in a bomb shelter with three Arab girls who are terrified of Hamas. To try and find the right words to comfort the enemy. To see that they’re not the enemy after all. To experience the truth that none of the world is willing to see.

There are few people in the Western world that understand the fear of hiding from bombs. I have watched an old Israeli woman comfort three young Arab girls in a basement. Seen her give hugs, water, and promises that everything would be okay. The media would have you believe this isn’t possible. They are excellent storytellers. But me, my boyfriend, an old-Israeli woman, three Arab girls and countless other people in a bomb shelter on one summer night in Tel Aviv have a much different story to tell.