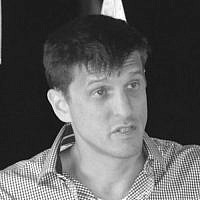 The Blogs
Ari Kalker
We cannot see the future, but we can shape it!
Apply for a Blog
Advertisement
Please note that the posts on The Blogs are contributed by third parties. The opinions, facts and any media content in them are presented solely by the authors, and neither The Times of Israel nor its partners assume any responsibility for them. Please contact us in case of abuse. In case of abuse,
Report this post.

No, not with coronavirus, COVID – 19, Chinese flu, or whatever it’s being called.  I am not even sick with anxiety or stress, although both of those are through the roof by me.  I am sick with disgust, not towards the Hareidi or Arab populations, but utter and total disgusts at our entire political leadership.  All of them, left, right, center, up-down doesn’t matter, they are all acting like silly immature children.

There is always political bickering while forming a government our system is built to guarantee it.  Expanding to over 30 ministers disgusts me but isn’t surprising. What surprises me is the total lack of mature calm leadership.  Netanyahu has led this country through some of it’s most difficult diplomatic days with poise and maturity while now he is acting like a crazed child afraid of his shadow.  Gantz was the chief of the army the top man responsible for the safety and wellbeing of the state of Israel and by extension the entire Jewish people, he never flinched or lost control. The rest of them just go along like a bunch of lemurs following the health ministry over the cliff.

When I was young I was taught to plan for the worst, hope for the best, stay calm, keep everything in perspective, and never expect a hand out from anyone.  Our leadership is doing the exact opposite, they didn’t plan, they have no hope, they are not calm, have lost total perspective, and believe a small handout will solve the financial destruction they have brought upon us.

While hindsight is 20/20 and as far as I know we still don’t have a working time machine, we can’t go back and start planning for this crisis.  But, now that we can look back maybe we can learn something for the future. I would like to see a shift of priorities after this crisis, I would like to see the ministry of culture completely dissolved and have its entire budget transferred to the ministry of health, both to close the gaps and create a surplus fr the future of everything from medical equipment to trained doctors and nurses.

Hope is the product of vision.  When there is a clear vision for the future we can be hopeful that things will change and that vision will be realized.  The past year has proven that every existing politician is either too self-absorbed or too pragmatic to have a real vision.  The right is no longer right, the left has mutated in to not Bibi and Bibi has become only Bibi. None of that is a vision for the country.  I would like to see policies being debated, ideology being put forward. I would rather have a leadership filled with dreams and hopes that leave the pragmatism to the bureaucrats.

Google defines the word calm as follows “not showing or feeling nervousness, anger, or other strong emotions.”  that is the exact opposite of every current politician’s behavior. They are all angry and being controlled by their emotions.  I don’t blame them, it is hard to overcome your emotions when you lack a vision based on sound ideological principles.

Political leadership is all about developing the best public policy.  Public policy is all about balancing the different needs of society. The current corona crisis has forced our leadership to try and balance the general health of our nation with our financial wellbeing.  While I understand that it will be impossible to save everyone from the virus before treatment or vaccine is created I don’t see the value in destroying our economy in order to save our lives. The cure can be more deadly than the disease and the ends don’t always justify the means.  I will present a clear and detailed plan of what I think a balanced response should look like in my next post.

The sign that we are truly in trouble as a nation is the speed with which our current leadership announced that they will be throwing money at us.  Of course, we all forget that it is our money that they first took from us that will now be thrown back at us. In order to avert our attention away from their total failure of leadership, they wave some money in our face.  It only works because we have been so choked with over-taxation till now that we need every little bit just to survive.

Inevitably we are all going to get infected, some of us might even die from this virus. The overwhelming majority of us won’t.  The question is at what expense should that happen.

About the Author
Ari made aliyah after completing high school in NY, served as an infantry soldier in the IDF, and is a commander in the reserves. He worked for many years with lone soldiers and promoting Zionist education. Ari is was the director of English education at Im Tirtzu and the director of housing at the lone soldier center in memory of Michael Levin. Ari has returned to the for-profit sector and is following his passion for building the land of Israel.
Related Topics
Related Posts
Ari Kalker
Comments