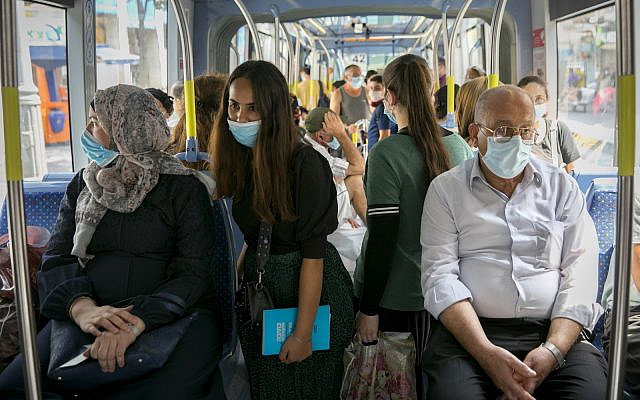 Passengers wearing face masks for fear of the coronavirus ride the light rail in in Jerusalem on April 21, 2020 (Olivier Fitoussi/Flash90)

The coronavirus pandemic has plunged the world into an era of immense uncertainty, thrusting aside narrow militaristic notions of security and compelling a reassessment of what individual and collective safety entails.

For the first time since the adoption of United Nations Security Council Resolution 1325 on October 31, 2000, which injected gender issues into discussions of all aspects of war, peace and security, the meaning of security in Israel is being reviewed, revised and expanded to incorporate a range of civilian concerns.

Providing for human security in this broader sense is now the order of the day. COVID-19 has done what 20 years of Israeli women’s efforts to implement the landmark decision have failed to do: highlight the significance of a mainstreaming approach that offers an inclusive embrace based on egalitarian values with practical relevance for meeting myriad contemporary challenges.

The impetus for the formulation of UNSCR 1325 stemmed from the growing understanding that the exclusion of women’s experiences and insights has hampered efforts to prevent violent conflict, safeguard civilian populations (especially women and children, the main victims of armed confrontations in the 21st century) and promote their peaceful resolution. The UN body adopted a gender mainstreaming approach, one which underscored the protection of women in conflict situations, introduced gender perspectives into the multiple dimensions of conflict prevention, management and resolution, and prioritized the participation of women in decision-making on these matters.

This threefold strategy is based on the premise that inclusion on an equal basis — especially of those most affected by wars and its consequences — is essential to minimizing violent conflicts and constricting their manifold effects. Fundamentally, therefore, 1325 and the many activities it has engendered offers an overarching and refreshing path to realizing human security.

Israeli women, both officially and on the civil society level, were quick to embrace the UN resolution. In 2005, Israel became the first country to legislate one of its key provisions when it passed an amendment to the Equal Rights for Women Law providing for the participation of women in all official panels and negotiating teams. Government Decision 2331 of December 2014 adopted (but has yet to implement) gender mainstreaming in official bodies and promised to formally design a National Action Plan (based on a draft submitted by a coalition of women’s organizations), just as more than 85 countries have already done. But until recently these initiatives were deemed esoteric: they never really exerted an influence beyond the limited circles of women’s organizations and feminist activists and have yet to be implemented.

And then came the coronavirus, propelling the various dimensions of human security to the forefront of societal concern and to the top of the policy agenda in the country. The first such aspect, obviously, relates to the medical emergency, which has adversely affected low-income groups more than the economically comfortable, the periphery more than the center, the ultra-Orthodox and Arab society more than other groups, citizens more than refugees, men more than women. Every effort to control the pandemic itself that has avoided taking into account the needs and viewpoints of specific groups has failed to date, rendering Israel’s treatment of the health challenge erratic, if not flailing, at best. The same holds true for its potentially even more severe socioeconomic byproducts.

Indeed, Israel now has an unemployment rate of over 20%, with women job-seekers outpacing men by a ratio of almost two to one. Small and middle-sized entrepreneurs have suffered tremendously, and, if possible, the poor have become poorer. Yet government policies have attempted to establish universal criteria for vastly different populations, thereby not only exacerbating what is already the worst economic tailspin in the country’s history but also intensifying a rapidly growing welfare crisis.

This process has also magnified concerns revolving around personal security. Domestic violence, mostly gender-based, has skyrocketed. Despite the rise of a vigorous #MeToo movement, 19 women have been murdered in the last 10 months alone; battered women’s shelters are overflowing, and instances of sexual discrimination and harassment abound. Violence has spread into the streets, particularly in disadvantaged areas and marginalized communities. Personal security in Arab society is at a low ebb. Once again, attempts to deal with these problems have oftentimes excluded representatives of those most directly affected and ignored their particular insights. The results, sadly, are everywhere evident.

These elements of human security present a complex picture that demands nuanced responses in the spirit of gender mainstreaming. Predictably, women have been among the first to identify and respond to this need. Since the beginning of the year, they have revived efforts to implement Resolution 1325 and have advocated for the application of its mainstreaming strategy to Israeli society and to the multi-faceted human security challenges it faces. Dozens of events have been organized by a broad coalition of women and human rights organizations to mark the 20th anniversary of the resolution, ranging from a formal debate in the Knesset plenum and a special session of the Committee for the Advancement of Women and Gender equality this week, to many conferences, discussions, and demonstrations throughout the country.

Common to these diverse initiatives is one overriding message: that significant social change is a broad societal undertaking that requires joint efforts by men as well as women, by the religious as well as the secular, by Ashkenazim alongside Mizrahim, by the residents of outlying areas as well as major urban concentrations, and by both Arab and Jewish citizens of the country. Such a transformation cannot occur without the conscious empowerment of those who are suffering the most and their transformation from victims of their surroundings to active agents in the eradication of the social and economic underpinnings that have sustained their condition in the past and now accentuate its manifestations.

Knowingly or unknowingly, gender discourse, values and approaches are now penetrating the heart of public consciousness in Israel. The activation of an all-embracing mainstreaming approach to averting further polarization, constructing a new solidarity based on mutual respect, and achieving human security in its various forms may be the most promising way forward. Such a move will help extricate Israel from its present morass and set the stage for the establishment of a more embracing and equal economy, society and polity.