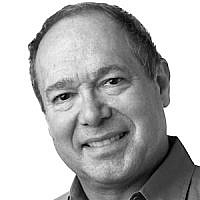 The Blogs
Robert Goldberg
Apply for a Blog
Please note that the posts on The Blogs are contributed by third parties. The opinions, facts and any media content in them are presented solely by the authors, and neither The Times of Israel nor its partners assume any responsibility for them. Please contact us in case of abuse. In case of abuse,
Report this post.

When the pandemic erupted, it was only a matter of time before anti-Semites and Israel hates around the world began to spread their filth in the wake of the coronavirus pandemic.

There was the usual run of the mill kind of accusations, such as George Soros was behind the outbreak. Then there’s the assertion, as one genius wrote: ‘Coronavirus SARS and Ebola were US DOD bio-weapons conceived and put into play by the Zio controlled Government.”

We also had the usual knee jerk reaction of so-called pro-peace Jewish groups: J Street ignored the impact of the pandemic on Israel and instead asked Congress to give money to Hamas and the Palestinian Authority. And Ifnotnow — a group of Jews that hate Israel too much even for J Street’s taste — has started a petition attacking Israel. The petition demands “ Israel eliminate restrictions on the Gaza Strip” knowing full well that if Hamas and other terrorist groups have the time and money to launch rockets into Israel during a pandemic, imagine how carnage they could produce if Israel let them.

But the pandemic has given anti-semites more time to come up with new material and boy have they delivered. I have two favorites and find it really hard to make a choice:

The most inspired allegation: That Jeffrey Epstein was a Mossad agent, Ghislaine Maxwell was his Mossad handler, and everyone in Washington is complicit in the usurpation of our government by Jewish power.

And then there is one claim that I half believe is a prank or a joke in search of a punchline. Namely an antisemitic conspiracy claiming that the Federal Emergency Management Agency (FEMA) “is controlled by the Chabad Lubavitch movement” which in turn would impose martial law. Trust me, if Chabad was running FEMA it would be better organized and the food would be delicious though gentiles might be inconvenienced by the occasional use of non-dairy coffee creamer.

Additionally, anti-Israel forces were forced to decide whether or not to use a vaccine if Israeli companies developed it. Typically, the BDS Movement — run by and consisting of fragile and privileged millennials — had no problem making an exception to the boycott in order to keep safe. Soda Stream, no. Life-saving vaccines, where can I sign up. The sacrifice of the BDS movement is would be awe-inspiring if not for the devotion to theological consistency of Iran’s mullahs:

A top Iranian cleric said the country’s citizens could use a potential coronavirus vaccine made by Israel if they could find “no substitute.”
“It is not permissible to buy and sell from Zionists and Israel,” Grand Ayatollah Naser Makarem Shirazi said Wednesday. “Unless the treatment is unique and there is no substitute.”. So much for martyrdom.

The award for the most principled position of an anti-Semite regarding the use of an Israel vaccine comes of course from a self-hating Jew: Richard Silverstein. Writing in the Jacobin publication, Silverstein concludes that if Israel takes a break from developing chemical weapons to kill Palestinians to develop a vaccine, it might be okay to use, but we should fill really guilty when we do: I quote Silverstein at length to assure you I am not taking him out context and to assure you that there is another individual who brings more shame on Jews than Harvey Weinstein:

Israel is Militarizing and Monetizing the COVID-19 Pandemic

Israel announced before any other country that its chemical and biological weapons lab at Nes Tziona had developed a vaccine (though the claim was later disputed). While it’s certainly commendable for Israeli scientists to make such efforts to save lives, Nes Tziona has the expertise to develop such a vaccine because its research involves testing and developing lethal agents used against the country’s enemies. The lab also develops agents to counteract such pathogens as COVID-19 in order to protect Israel’s soldiers and civilians.

But the preponderance of Nes Tziona’s work, at least what is known publicly, is used to develop deadly agents to kill Israel’s enemies. The poison injected by two Mossad assassins into Khaled Mashal in Jordan in 1997 was developed by Nes Tziona, as was the antidote that King Hussein demanded in order to save Mashal’s life. The poison used by the twenty-seven-strong Mossad hit team to assassinate Hamas weapons dealer Mahmoud al-Mabhouh in Dubai in 2010 was similarly developed by Nes Tziona. Any evaluation of the good that could come from such a COVID-19 vaccine must be weighed against the damage such a facility does in all its other work.

There you have it. We have arrived at a point in history where you can’t be anti-Semitic without also having to buy something from Israel at the same time. Hatred endures but Israel thrives. We should let this knowledge move us from sadness to smiles. Maybe even a laugh or two.

About the Author
Robert Goldberg is the Vice President, Centre for Medicine in the Public Interest and co-founder of program for Israeli biotech startups “Healthcare Technological Innovation- From Idea to Commercialisation."
Related Topics
Related Posts
Comments