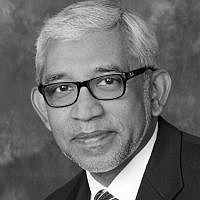 The Blogs
Parvez Ahmed
Apply for a Blog
Please note that the posts on The Blogs are contributed by third parties. The opinions, facts and any media content in them are presented solely by the authors, and neither The Times of Israel nor its partners assume any responsibility for them. Please contact us in case of abuse. In case of abuse,
Report this post.

A 2012 survey by the Pew Research Center found that 71 percent of people in Turkey and 67 percent in Egypt prefer a democratic form of government. And yet when it came time to vote, people used the ballot box to favor authoritarian leaders – Abdel Fattah el-Sissi in Egypt and Recep Tayyip Erdogan in Turkey.

Democracy is not just the will of the majority, it is also the art of choosing leaders who will work to uphold personal freedoms, rule of law, common good, and respect for minority rights. As an American in the age of Trump, I am perhaps not in any position to lecture Egyptians or Turks. Still, we need a conversation on what it truly means to be democratic.

Although no universal definition exists for democracy, there are agreed upon parameters that define a proper democratic system. Fair elections is a necessary but not a sufficient condition. A proper democracy needs effective checks and balances, full political participation of women and minorities, freedom of the press, civil liberties for all citizens, and an independent judiciary. All of these factors combined determine the health of a democracy. The UK-based Economist produces a Democracy Index that amalgamates these factors and uses experts to rank countries on their Democracy Index.

Only 19 out of 167 countries surveyed live in full democracies, where basic political freedoms and civil liberties are respected, judiciary is independent and the press is free. In addition, there is an effective system of checks and balances. In 2016, the US for the first time was bumped down to “Flawed Democracy” status, partly because it is beset with low levels of political participation and gridlock in Washington, even though one party effectively controls all branches of government.

Egypt clocked in at 133 as an “authoritarian” regime, and Turkey at 97 as a “hybrid” regime. The highest ranked Muslim majority country is Malaysia, at 65.

For many decades, Islamist political parties have complained that the poor state of democracy in their countries is the result of secular leadership, often with Western backing, exercising authoritarian grip. To a certain extent this is true. The Egypt of both Hosni Mubarak and Sissi is a poster child for this. But time and again when Islamists have gained control, they have fared no better. Turkey’s Erdogan is a prime example now, just as Muslim Brotherhood’s Mohammed Morsi was a few years ago.

Sissi and Erdogan came to power via vastly different routes. While Sissi’s election was marred by poor voter turnout and many complaints of voter irregularities, Erdogan won his elections fairly. Speaking on the state of Egyptian democracy, Senator Patrick Leahy said, “Egypt today, where political parties are banned and their leaders imprisoned, makes a mockery of the most fundamental principles of democracy.” For his part, Erdogan essentially divided the world into two camps, those with him and those against him. He went on to dismiss democracy and freedom as having “absolutely no value” and called for journalists, lawyers and politicians to be prosecuted as terrorists.

The latest round of voting in Turkey that gave Erdogan absolute powers, far exceeding that of an American president, is an obvious cause for concern, given that Turkey is a NATO ally and an important partner in the region. After a narrow 51-49 vote in Erdogan’s favor, the validity of the referendum has been called into question as the European Commission has asked for an investigation into alleged voting irregularities.

And yet on my social media feed, the congratulatory messages from some American Muslim leaders celebrating Erdogan’s referendum victory is perplexing. It is one thing for Turks, deprived of a free press, failing to recognize the dangers of Erdogan’s power grab. But for Muslim leaders in America, enjoying the fruits of a free media and freedom of assembly, to ignore the dangers of an authoritarian power grab is an astonishing abdication of responsibility. The Quran admonishes: “You who believe, uphold justice and bear witness to God, even if it is against yourselves, your parents, or your close relatives… if you distort or neglect justice, God is fully aware of what you do.” (4:135).

Parvez Ahmed is a Fellow of Shalom Hartman Institute’s Muslim Leadership Initiative and Professor of Finance at the University of North Florida.

About the Author
Parvez Ahmed is a Fellow of Shalom Hartman Institute’s Muslim Leadership Initiative and Professor of Finance at the University of North Florida.
Related Topics
Related Posts
Comments