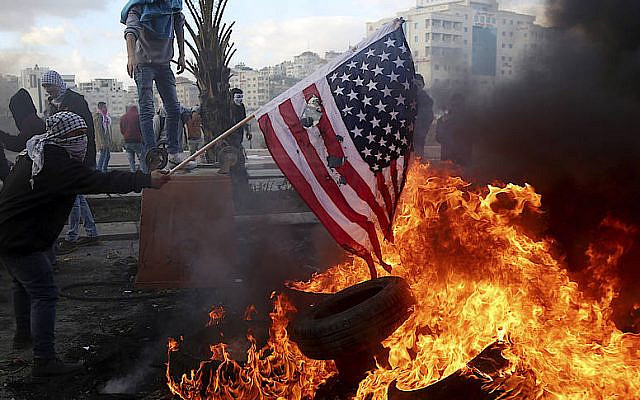 Palestinian protesters burn the US flag in Ramallah during clashes with Israeli soldiers after Donald Trump's announcement to move the U.S. embassy to Jerusalem. (EPA)

Israel’s Declaration of Independence states, “The recognition by the United Nations of the right of the Jewish people to establish their State is irrevocable. This right is the natural right of the Jewish people to be masters of their own fate, like all other nations, in their own sovereign State.” Many people read these phrases and see a contradiction between the Jewish people’s assertion of its right to self determination in its own land and its refusal to allow the immediate establishment of a Palestinian state.

During the Oslo accords and subsequent peace negotiations, the late Israeli Prime Minister Yitzchak Rabin opposed a Palestinian State. According to the text of the accords, the Oslo Accords aimed “To establish a Palestinian Interim Self-Government Authority… for the Palestinian people in the West Bank and the Gaza Strip, for a transitional period not exceeding five years, leading to a permanent settlement.” It wasn’t until a June 2009 speech by Prime Minister Benjamin Netanyahu, that Israel agreed to a Palestinian State.

In his “Bar-Ilan Speech,” Netanyahu said, “Within this homeland lives a large Palestinian community. We do not want to rule over them, we do not want to govern their lives, we do not want to impose our flag and our culture on them. In my vision of peace, in this small land of ours two peoples will live freely, side-by-side, as good neighbors with mutual respect. Each will have its own flag, its own anthem, its own government. Neither will threaten the security or survival of the other…. If we receive this guarantee regarding demilitarization and Israel’s security needs, and if the Palestinians recognize Israel as the state of the Jewish people, then we will be ready in a future peace agreement to reach a solution where a demilitarized Palestinian state exists alongside the Jewish state.”

While many focus on Netanyahu’s acceptance of a Palestinian State, most forget the conditions of his agreement. In order for Israel to agree to a Palestinian State, the Palestinian people must fundamentally change the values and principles it currently maintains. It currently recognizes Israel, but not as a Jewish state and although it cooperates with Israel on certain security matters, its incentivizing of terrorism continues to threaten Israel’s security.

Israel can never agree to a Palestinian state unless its security and self-determination is guaranteed. Currently, Palestinian leadership and its people give no reason for Israeli leadership or its people to think that’s possible. Israel has lacked a genuine partner for peace for over 72 years, is it surprising that it now plans to act unilaterally?