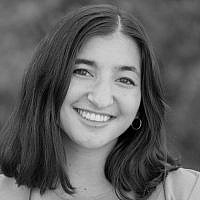 The Blogs
Joanna Mann
Apply for a Blog
Please note that the posts on The Blogs are contributed by third parties. The opinions, facts and any media content in them are presented solely by the authors, and neither The Times of Israel nor its partners assume any responsibility for them. Please contact us in case of abuse. In case of abuse,
Report this post. 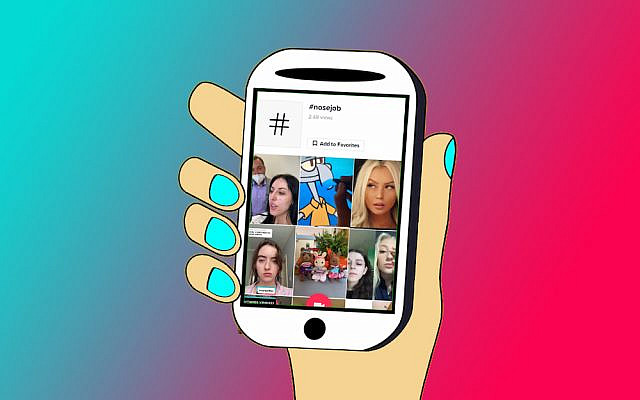 Don’t get me wrong, I love my “Jewish nose.”

But when more and more #nosejob and #nosejobcheck videos started popping up on my TikTok For You Page, it brought back those old unwanted feelings of hating my appearance I worked so hard to overcome. I wasn’t even interacting with the videos, yet for some reason, I couldn’t get them off my feed.

On TikTok, the #nosejob hashtag has nearly 2.5 billion views, and #nosejobcheck has over a billion as well.

The videos are all pretty much the same: the first half consists of people showing their side profile in several pictures (truly a nightmare for those of us with nose insecurities!), a horrifying photo of their post-op bloody and bruised face, and then — finally — the new and improved nose, which is usually tiny, upturned and bump-free.

Watching them makes me think about all of the young teenage girls on the app who are no doubt seeing the same videos I am. If I had seen these “transformations” at 15, it would have destroyed my already fragile self-esteem. I can’t help but wonder how many young teenagers today — including Jewish girls — are taking in these videos in harmful ways.

First, let’s just take a minute to talk about the antisemitic history of the stereotypical “Jewish nose.” There is actually no proof that Jews tend to have larger noses, or any physical characteristics that group us together, for that matter. There are Jews of every size, shape and color, and the diversity of the Jewish experience is something to be celebrated. But …

The large, hooked nose stereotype dates back to the 1930s, when it was used in Nazi propaganda to stir disgust and hatred of Jewish communities. I remember learning in Hebrew school about Nazi propagandist Julius Streicher and what he wrote in a children’s book during World War II.

“One can most easily tell a Jew by his nose,” he wrote. “The Jewish nose is bent at its point. It looks like the number six. We call it the ‘Jewish six.’ Many Gentiles also have bent noses. But their noses bend upwards, not downwards. Such a nose is a hook nose or an eagle nose. It is not at all like a Jewish nose.”

While there is no proof that Jews inherently have big noses, this feature does in fact run in many Jewish families, including mine. Whenever people see a photo of my family, the first thing they do is laugh and point out that my older sister and I most definitely inherited my dad’s “Jew nose.”

And while we wear this feature as a badge of honor today, for me it hasn’t always been that way. As a teenager I would straighten my frizzy, wavy hair before school, shave my forearms and, God knows, avoid showing my side profile at all costs. I told myself I would get a nose job before college. Maybe then I would finally be pretty enough to escape the teasing comments and wear a ponytail with pride.

But when graduation rolled around, I thought more about it and realized that being Jewish was my favorite part of being me. And that meant I was finally ready to embrace any physical attribute that came along with it.

This did not happen right away, of course, and I still catch myself overthinking it at times. But at 22 years old, I no longer entertain the possibility of a nose job, and I found that learning to love my nose came with learning to love the other parts of myself I thought I needed to “work” on.

Which brings me back to TikTok. How many girls must be out there watching these videos and questioning if they should join in on the “trend”? I was shocked and horrified to find out that “Teenage Rhinoplasty” exists for kids 15 and older if they want it. Had I known this at 15, combined with the influx of viral TikTok videos, I would have found a way to make it happen. And I would have missed out on the self-love and acceptance that came with time as I got older.

I don’t think that there’s anything wrong with getting plastic surgery. If changing a part of your body will make you more comfortable in your own skin, you should absolutely go for it. But I don’t think being bombarded with cute videos of a life-changing procedure as a child is the right way to go about making that kind of decision.

TikTok can be an incredibly fun outlet for Gen Z kids to express themselves, but it can also foster extreme insecurity and self-doubt. I hope teenage Jewish girls will scroll past these videos without a second thought, loving their amazing culture and the beautiful features that come with it.

About the Author
Joanna Mann (she/her) is a senior at the University of Oregon studying journalism and music. When she is not breaking the news, she spends her time taking pictures of her cats and watching Curb Your Enthusiasm.
Related Topics
Related Posts
Comments