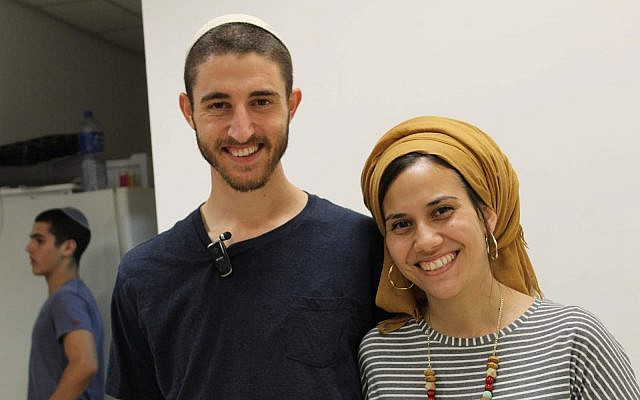 Ezra Schwartz and his late wife Reut, z”l. (courtesy of the Schwartz family)

On January 29th, Reut Schwartz, a 27-year old mother of three, was killed when her car was crushed by a truck in a horrifying car crash on Israel’s Route 90, which is known for its high rate of fatal accidents. This is an extraordinary letter that I received from her husband.

My name is Ezra Schwartz. A week and a half ago, my wife was killed in an accident on Route 90 in the Jordan River Valley, and I became a young widower with three little orphaned children. Today I met with the driver of the other vehicle. When I was informed of the accident, I immediately asked to find out who the driver was, so I could give him a warm hug. There is nothing that can be done for me, but there is for him. Last Sunday, during the shiva, as soon as the police allowed contact between us, I sent him the following message:

It’s me. Ezra, husband of Reut Schwartz of the Almashali family, who was killed in the accident. I don’t know who you are and you don’t know who I am. Death brought us together. It has bound us by blood. Whenever my wife and I heard about an accident, the first thing my wife, of blessed memory, would do was to think about the survivors. Those who have perished have died, but those who survived must live. That’s what my wife was like — she was sensitive to the grief of life. For this reason, the first thing I asked to find out after I received the devastating news about the accident was to find out who the offending driver was and how we can help him to overcome the crisis.

When I heard the details of the accident, I was even more horrified to find out that an innocent driver who set out on an innocent drive found himself killing another person and had no ability whatsoever to stop it. It is shocking. It is unjust and unfair. There is no reason for such a thing to happen.

I have nothing in my heart for you except for a lot of pity and prayers that you will overcome the terrible crisis and will be able to live a happy and good life. I am now fulfilling my wife’s unwritten will. I would very, very much like to meet you and give you a hug. You need to rise up, get stronger, and go on with your life with a great deal of might. During her life, my wife did good for everyone. I do not want the opposite to happen, God forbid, in her death.

Thinking about you all the time,
Ezra Schwartz

Today, we met. He came to my home. It was a hair-raising encounter. He and his wife are pure gold. All of his children are currently soldiers in the IDF or are in the process of enlisting. It is a shame that these are the circumstances that brought me to meet the treasures we have in this country.

The precious people in our precious land deserve good roads that connect the south and the north. They deserve for Route 90 to have two lanes in each direction. They deserve for it not to be a highway that kills people every week, leaving more widowers, orphans, and grieving families.

Our precious nation and our precious land deserve another road that will run the length of the country and be a major travel artery. Our beloved people and country, we promise that from now on, we will try harder for you.

Anyone who would like to is welcome to join me on this journey, and to find comfort in the building of our beautiful country.

Translated from the Hebrew by Shira Pasternak Be’eri.