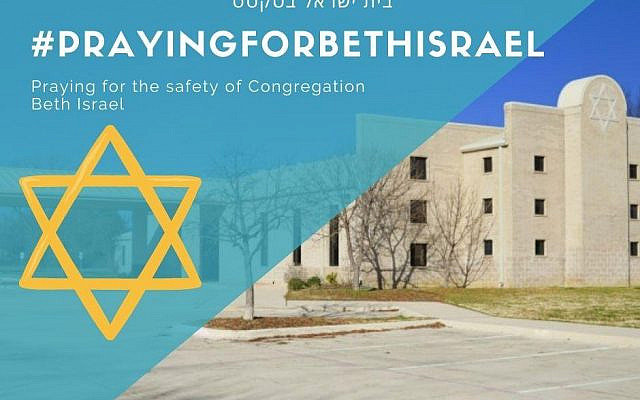 I was busy kvelling on Facebook about my son, Amit’s wheelchair basketball team’s win in Hannover, Germany when the N12 news flash came in, “An armed person is holding hostages in a synagogue in Texas”.

I immediately switched from the Hannover United Instagram page to CNN.

Nothing yet. Back to the Israeli channels.

Colleyville, Texas. I never heard of this town of 20,000  but I knew that in the Land of Jewish Geography, Colleyville was closer than further. There are no six degrees of separation.

My heart skipped a beat.  As a natural networker, a true lover of people, fascinated by diversity and culture, with friends from far and wide, I felt connected.

Amit spent a little over a year at the University of Texas at Arlington and I had grown a slew of online and offline friendships with Jews and non-Jews, Israelis and Americans. Nonetheless, I told myself that Texas is a big place… and where the heck is Colleyville anyways?

Within 7 seconds, Google showed me that Colleyville is 10 miles from Arlington and a further 7 seconds revealed that I share a number of Facebook friends with the rabbi. Growing up in the Reform movement with a father who is a Reform rabbi, I wasn’t surprised.

By this time, my Facebook feed was bursting with Colleyville news updates from a couple of local Dallas/Fort Worth groups of Israelis and Jews as well as the horrific live feed from the synagogue.

Within 20 minutes, CNN caught up and the horror was making its way through the mainstream US media. It was nearing midnight in Israel but I couldn’t stop scrolling. I spent the next few hours going back and forth between the Israeli and US media outlets and my Facebook feed.

Many of my Jewish American and Jewish Israeli friends expressed distraught and prayed for the safety of the hostages who were clearly targeted for the “sin” of being Jews.

The silence on the part of most (if not all) of my non-Jewish friends both in Israel and oversees was deafening. Moreover, I was disgusted by the abundant comments by my fellow Jews in the Israeli press about how “Reform Jews” weren’t really Jews and how the synagogue wasn’t really a synagogue and the rabbi wasn’t really a rabbi. I reminded myself “don’t read the comments” but nonetheless, I did.

As I drifted off to sleep, I prayed that the hostages will be released without physical harm.

At 6 a.m., Israel-time, the news was good. The hostages were released unharmed (physically at least) and the terrorist was dead.

This specific 12-hour incident was over but for the hostages, coping with the trauma is just beginning as are the discussions in the global Jewish community.

Jew hatred is an ancient past time and did not begin with the 2014 Gaza Operation, the 1967 Six Day War, the Holocaust, the establishment of the State of Israel in 1948, or the Balfour Declaration in 1917. The pogroms of Europe, the Inquisition and a never-ending quest to convert us Jews are just a hint of how ingrained antisemitism or my preferred term, Jew-hatred, is in the hearts of many.

Some of my Israeli friends have taken this tragic opportunity to support their belief system that all Jews should live in Israel. I strongly disagree. I love the Diaspora and the many Jewish Diaspora community traditions – ancient and modern – throughout the world. I also staunchly believe that Jews, similarly to people of other faiths, have every right to live in whichever country they feel comfortable.

Antisemitism in America and elsewhere was, is and unfortunately, will remain a challenge. However, jumping ship is not necessarily the solution. For those who would like to live in Israel – “Welcome” but living in this magical land has its own unique issues and risks. For those who are comfortable and happy in the many diverse Diaspora communities throughout the world, I support you and am honored to be a part of such a vibrant, colorful cultural mosaic.

For my non-Jewish friends and allies, I ask for and expect your support – in words, “likes,” posts, and deeds.

May we all feel safe in our synagogues, churches and mosques in Israel, America and throughout the world.