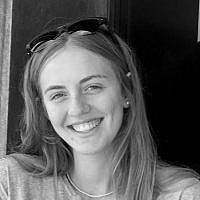 The Blogs
Avital Fisher
Apply for a Blog
Advertisement
Please note that the posts on The Blogs are contributed by third parties. The opinions, facts and any media content in them are presented solely by the authors, and neither The Times of Israel nor its partners assume any responsibility for them. Please contact us in case of abuse. In case of abuse,
Report this post. 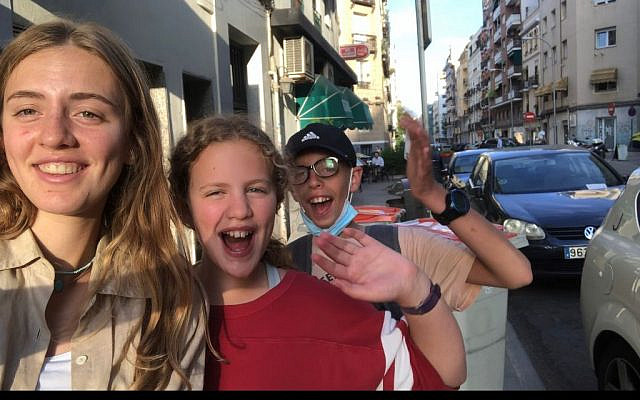 At the end of August, my family and I said goodbye to my grandmother in New York, and soon landed in Madrid, on our way home to Israel. Our plan was a brief excursion — a nice tour around the city, and, we hoped, lunch at a kosher pizzeria.

But as soon as we left the airport, we knew we might have been too ambitious: we didn’t speak Spanish, and the people we encountered did not speak English. It was going to be hard to communicate.

Our taxi driver did manage to drop us off at the kosher pizza place, but it was closed until noon. No matter, we decided. We’d be resourceful, and hop on a round-the city tour bus, and make it back in time for a pizza lunch. Before we could board the bus, however, we noticed an Orthodox man walking back from Shacharit — the morning prayer service. We chatted with him about the area, and he gave us directions.

On our way. Finally. Until we saw a local Starbucks and stopped to get drinks and use their restroom. Mom paid for my coffee, put her bag down next to my sister and me, and excused herself for a few minutes.

And you may know where this is going, but we certainly did not.

The next thing I knew, my mother was asking me where her bag was.

The thing I knew after that involved some panicked yelling, including by my mother, about the bag — which was, as you’ve surely surmised, nowhere to be seen.

I was sure she was confused. She must have left it in the bathroom, or something. In Israel, an unattended bag is a security concern — a “suspicious object,” at risk of being imploded by law enforcement. People doublecheck that a bag’s owner is nearby; they don’t take them! It literally didn’t occur to me that someone might have taken her bag.

Please understand: the loss of the bag was not incidental. All of her valuable items were in that bag: eight passports (both Israeli and American for the four of us), her credit cards, some cash, her Israeli and American IDs, her driver’s license, our plane tickets, two iPhones, and the jewelry that she (obviously) hadn’t packed in the checked luggage, which was valuable for both monetary and sentimental reasons — a necklace from her late grandmother, and one with her children’s names engraved on it. We were in Madrid, far from home, where we didn’t know a soul, or speak the language. We had no money, credit cards, no passports — and we were supposed to board a plane in a few hours.  Panic may well have been a reasonable response.

While my mother was yelling and my siblings began to cry, I tried to contact my father, who hadn’t joined us in the US. I texted him:

In the meantime, my mother was pleading with two women working at the Starbucks for help. One said she had seen a man sitting in the corner and he must have seen my mother pay for the coffee, noticed she left the bag, picked it up, and walked out.

And now we know what many of you already did: Madrid is known as a hub for pickpockets, even at restaurants and coffee shops, like Starbucks.

As is our wont, we tried to get practical, but we encountered more than a few unexpected hurdles. For example: my mother called the police from the Starbucks phone, but they said we had to come down to the station and that they could not come to us. Recall: No money, no Spanish. We really could not conceive of how we were to get to the station on our own.

Another example: Some three customers were sitting in that Starbucks. They clearly noticed what had happened. And nobody engaged with us. They seemed to look at us with pity, but beyond that, they drank their coffees as if nothing had happened. I try to imagine the same happening in a Jerusalem cafe, and I simply cannot. Israelis may be brash and poke their nose where they aren’t needed, but the flip side of that is an apparent caring for anyone in need. I have no doubt that the ruckus we made in our time of need would not have been ignored in the holy land.

It was a moment of reckoning for me, as I suddenly realized that we were, in fact, all alone.

Until we remembered the Chabad man we had met earlier. Using the Starbucks WiFi, I was able to use my phone to google the Chabad House in Madrid (my phone was with me, not in my mom’s bag), and we called him from the Starbucks phone.

As Rebbe Nachman said, ״ואפילו בהסתרה שבתוך ההסתרה בוודאי גם שם נמצא ה׳ יתברך״ — “Even in the hiddenness that is within the hiddenness, there surely God is found” Even on the other side of the world, God was watching us and sent us help.

He surely really was heaven-sent. For he dropped whatever he was doing and came to help us. He met us near the Starbucks, calmed my mother, and walked with us to his Chabad House. We kids were able to release our (by then) tight grips on our own bags, and he offered us food and water. Then he told us that we needed to go to the Israeli embassy and get passports there, so we could make our flight.

It was an awkward moment, as my mother realized she needed to ask to borrow some cash — even just to get the embassy. We had not a cent on us (in any currency). Zalman (that was his name) reached into his pocket, pulled out whatever money he had on him, and handed it to my mother with a smile. It was 120 euro! And he didn’t even ask her name. He didn’t demand her bank details so he could get the money back. Truly, he didn’t ask for anything in return; he just wanted to help.

And so we headed off for the Israeli embassy — with some chaotic, yet ultimately successful, efforts to obtain photos for our new passports along the way. Once we got there, my mother explained what had happened to the woman behind the desk, including the fact that our flight was supposed to leave in a few hours.

Thankfully, the woman told us that they would try to get us on the flight. But with that great news came another crushing hurdle.

I’d never seen my mother helpless like that. I managed to contact my father (the embassy had WiFi), and he tried his best to transfer money to us at the embassy, but the processing simply didn’t work. Apparently, wiring money to Spain isn’t as easy as it sounds.

I decided to text Zalman. In less than a minute, he responded and said he was on it. Not two minutes later, he confirmed that he had transferred 164 euro to the embassy. Thanks to Zalman, again, we got our passports. Not only that, but he acted as though it were no burden at all.

He really saved us that day. What would have happened without him? However would we have gotten out of Spain? I know this — it would have been a far worse ordeal.

We went back to the Chabad House, finally done with the embassy, and Zalman offered us a hot meal, something to drink, and a place to sit down. He even apologized that “it wasn’t enough,” because his wife wasn’t home to serve us an (even) better meal. But we were simply grateful; without his efforts on our behalf, we don’t know how we would have left Spain. Worse, we’d be left with a lot less trust and hope in humanity.

I never really understood why Chabad do what they do, especially in the small and stranded places of the world. I now know exactly why. What a kiddush Hashem (sanctification of the Name of God) — upholding God’s Torah in far-flung places, and embodying what I’d always learned, but perhaps had never seen to this degree – that all Jews are responsible for one another. And all the more so when nobody else will step up to lend a hand.

On behalf of my parents and my brother and sister, I thank Zalman and his family. I will never forget the kindnesses he did for us. 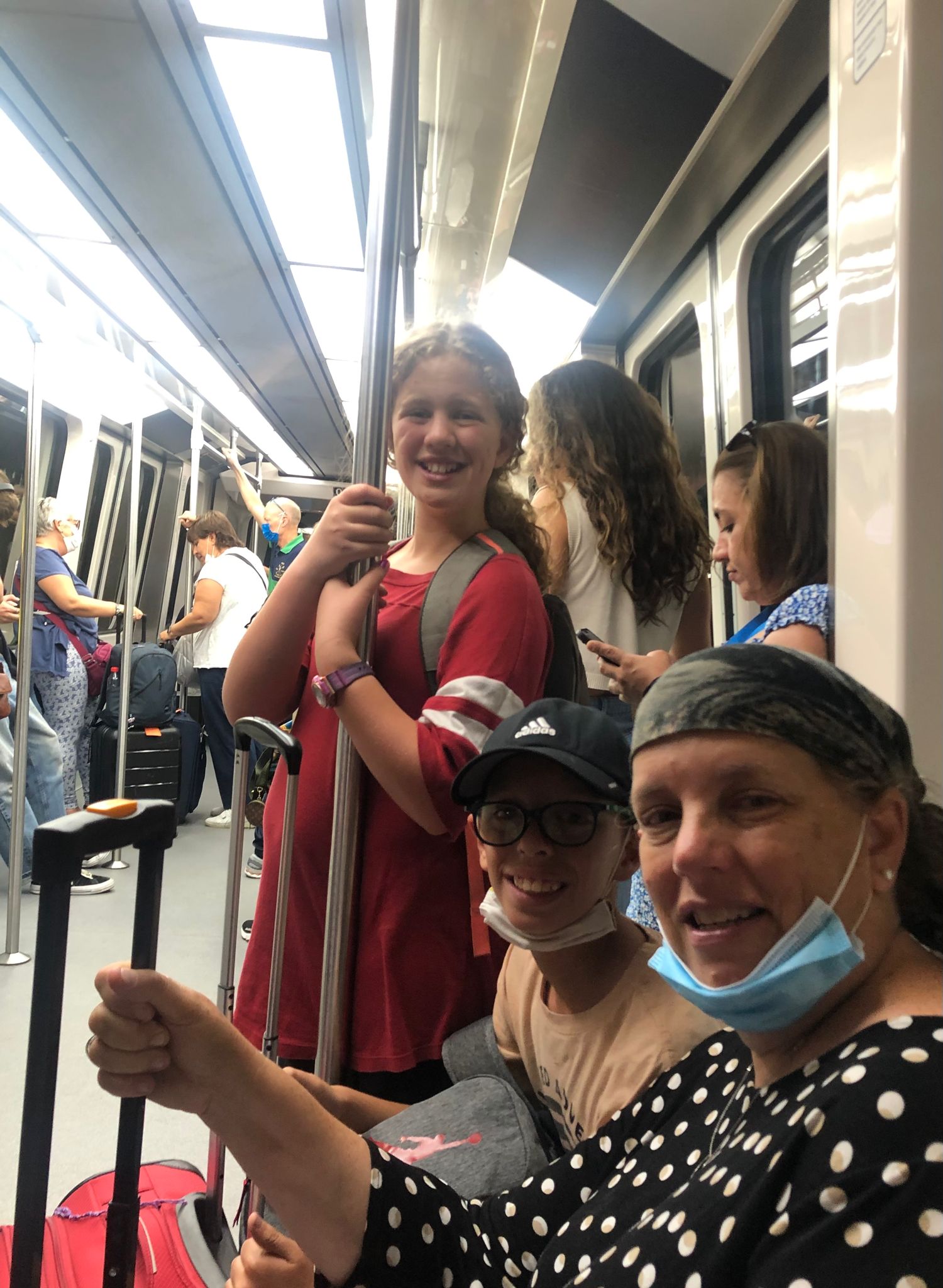 In Madrid, finally on the train at the airport to catch our flight back to Israel. (courtesy)
About the Author
Avital Fisher is a 12th grader in Horev high school in Jerusalem. She is a proud daughter and sister to her family who live in Armon Hanatziv.
Related Topics
Related Posts