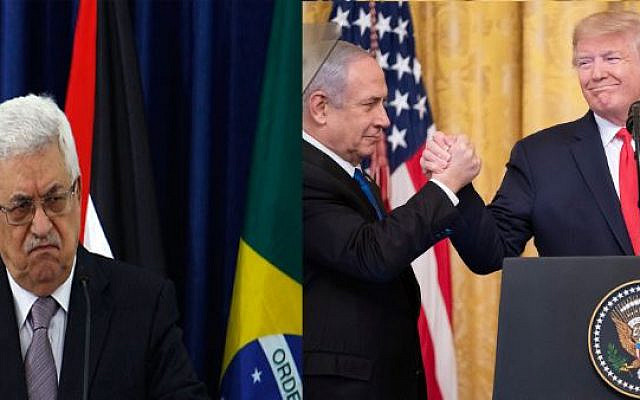 Reuven Rivlin, current president of the State of Israel has stated that Israel is fundamentally changing by dividing the poplation into five tribes and comparing them. How will Donald Trump’s unilateral vision for peace affect Israel’s tribes in the long term?

President Rivlin calls the demographic change “The new order” and consists of Arabs, Ultra-orthodox, national religious and secular. Furthermore the President, Think-tanks and organizations has recognized a fifth tribe – the Diaspora.

If Trump’s Roadmap for Peace would be implemented to it’s full extent, Israel would face obstacles that would heavily inflict it’s economy, infrastructure, demographic structure and a criss-cross of land borders. De jure it can be considered true that no-one will have to leave their home, but De facto Israel will face mass-internal migrations and perhaps even setting up emergency shelters or refugee camps – as a result of the proposed border swaps.

The Israeli Arabs lives all over Israel, but the major part has it’s home in the Triangle Area, The Galilee, Haifa and Jerusalem. This tribe vehemetely refuses to become a part of a future Palestinian State. A poll from the year 2000 shows that by then, 80% of the tribe rejects moving to Palestine. This poll was conducted in the triangle area, which can be the less Israel-friendly part when compared with the tribe in the Galilee or Haifa. A more recent nationwide poll indicates that no less than 91% “Fully or in part supports Israel, does not want to live in a palestinian state”.

If the peace plan is implemented to it’s full extent, most residents of the triangle area will move to other arab towns in Israel – which already are overcrowded. The socio-economic cost of uprooting and leaving everything you have behind cannot be calculated. But keep in mind that a mass-exodus will take place, with that comes overcrowdedness, more structural homelessness and a vastly burden on the current ever-so lacking infrastructure and social services provided in Arab municipalities. A slowdown of the economy will take place, since a considerable part of the group will have to quit their jobs and businesses. 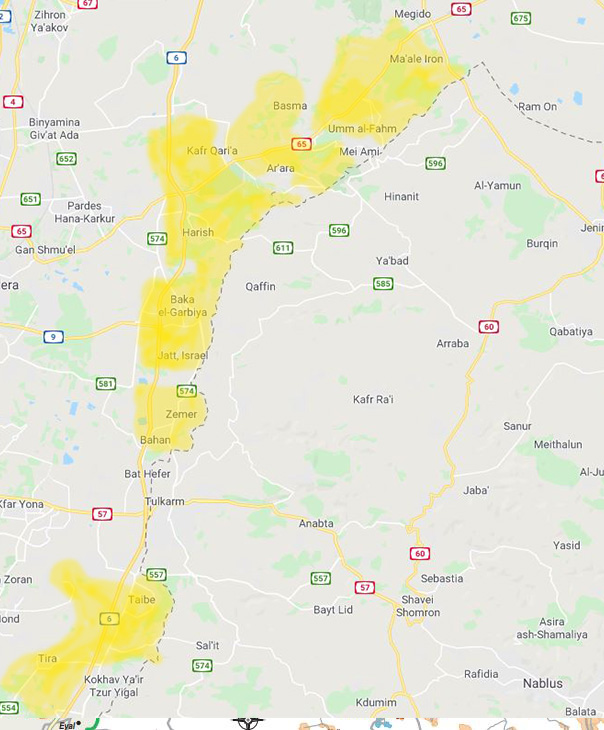 Areas mainly populated by Israelis of Arab origin, which would be part of a future Palestine as envisioned by Donald Trump, Jared Kushner and Benyamin Netanyahu. The variations of highlighting conjuncts with the population density (Copyright: Jonas Amir Kadah, 2020)

A total of 18 qualitative deep interviews were conducted through Skype with community leaders, municipality spokespersons and key leaders of businesses operating there. The conclusion of the interviews are that the mass-exodus phenomena will route as illustrated below. 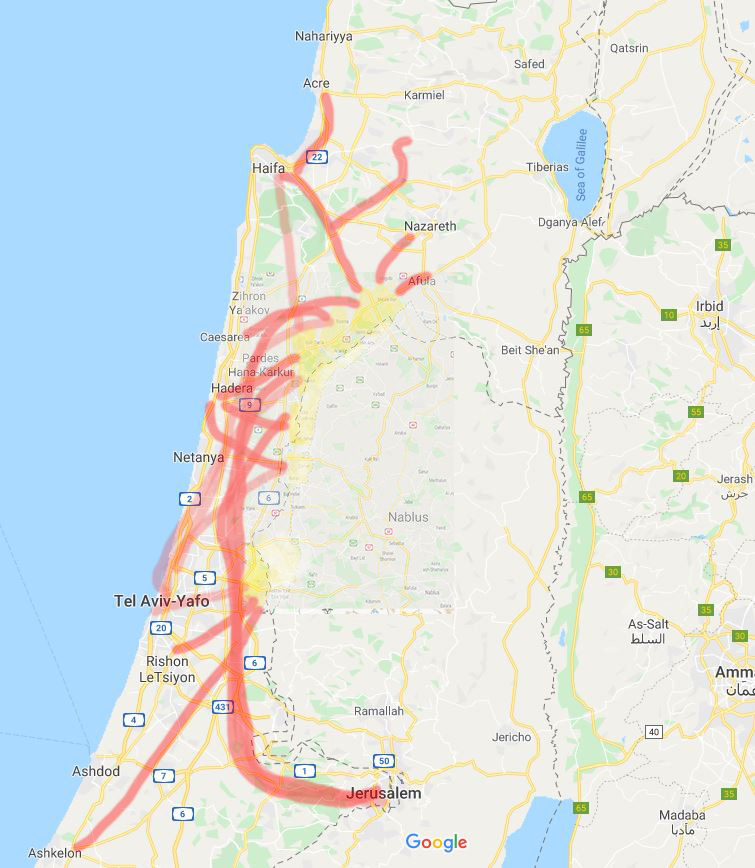 Israelis with Arab origin will mainly move to places routed out in red where the destination is clearly seen. The darker routing, the more people is indicated to move to that location(Copyright: Jonas Amir Kadah, 2020)

The Jewish communities within the land swap area can De jure stay, but should be considered impossible under Palestinian administration.

The Ultra-Orthodox Jews as one group will not be affected, but a majority of them will both thrive and suffer. Mainly because Jerusalem – according to Israeli law De jure and De facto will belong to Israel. The temple mount would open for prayers – which comforts this tribe, while in the same time they will suffer greatly at the anger of the muslim worshippers attending the Al-Aqsa compound. My analysis is therefore that they will be innocent targets and instigators of violence, while in the meantime risking to saw split between the Arab tribe. A split which we saw horrible consequences of during 2014. So in a way they will be put between a rock and a hard place with a few new benefits but at a cost – is it worth it?

The National religious tribe initially thought they would thrive and succeed in conquering of what is left of Judea and Samaria, as they call it. Unfortunately the tide turned against them when we scrutinize the map and new borders. A lot of enclaves will be surrounded by Palestinians, in a way just like today where many Palestinian communities are surrounded. This will not benefit the settler movement or it’s neighbours – there is a considerable risk that those settements surrounded by Palestinian land will fade away due to economic stagnation and security issues. I chose a prime settlement, Ariel – with it’s own university and city functions comparable to any average Israeli city. 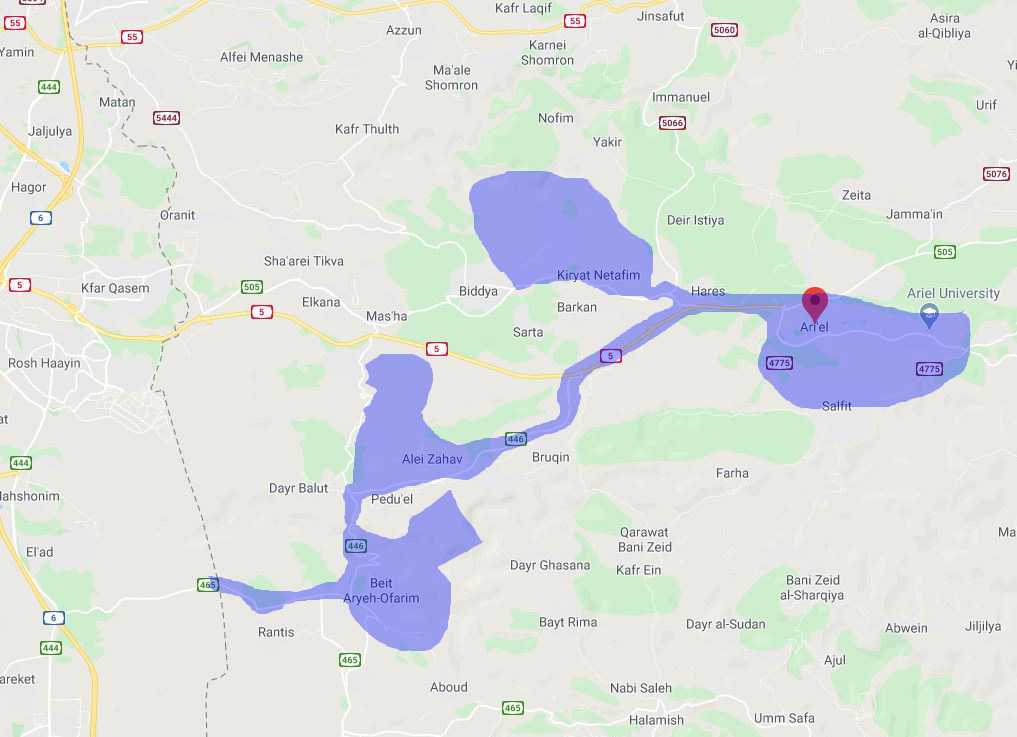 How to visit Ariel when the proposed peace treaty will be implemented as Trump and Netanyahu wushes for. (Copyright: Jonas Amir Kadah, 2020).

The Palestinian city of Qalqilya is per today living under the mercy of COGAT, the IDF and neighbouring settlements. If the only entrance road closes, they are shut off from the world. This will be the case with Ariel and 26 other settlements. The Deal of the century says about ten enclaves will be situated like this, but taking a closer look at the map, the roads and communities I could easily pick out 26 communities. 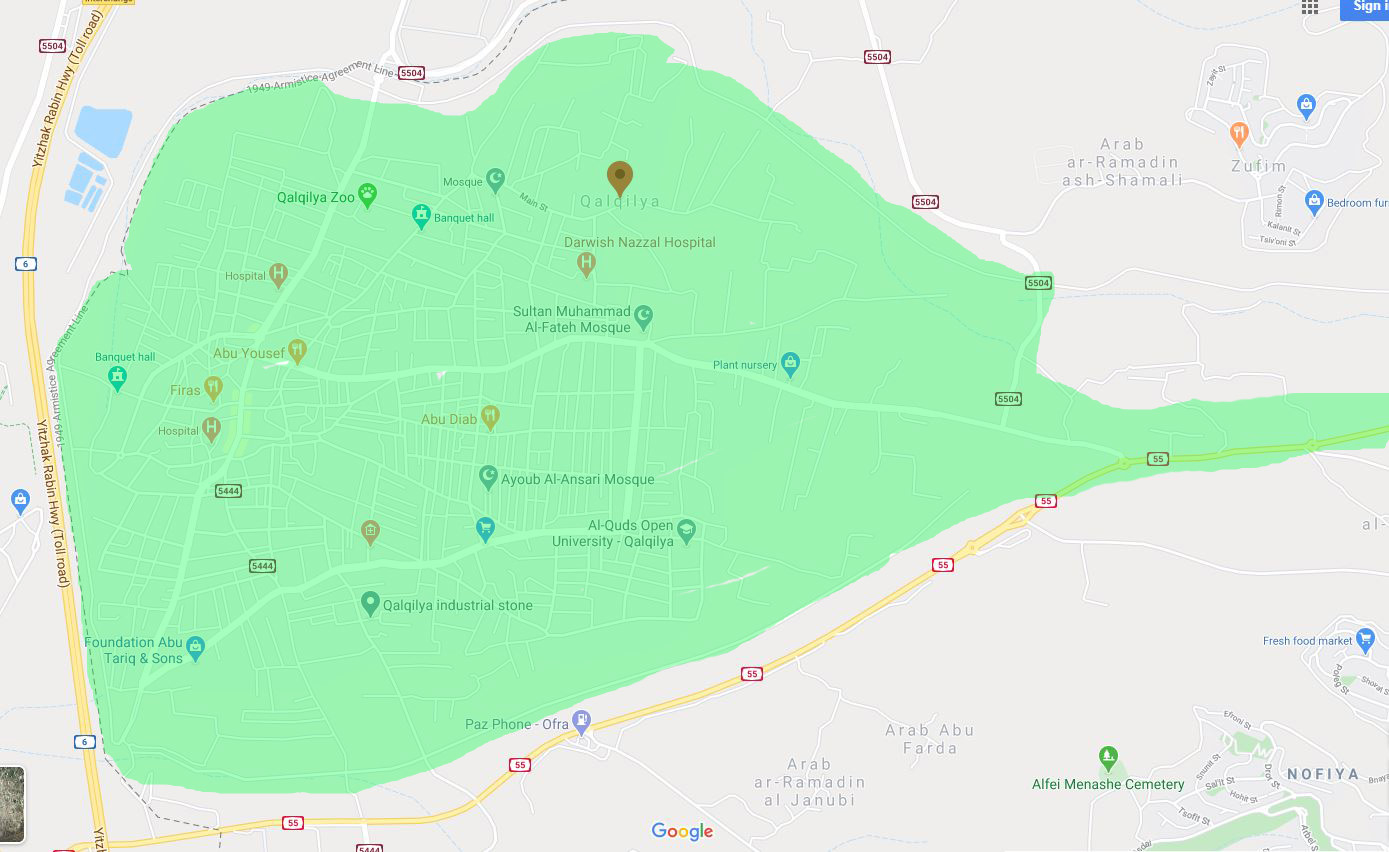 Qalqilya in comparison to what Ariel can be subjected to. (Copyright: Jonas Amir Kadah, 2020).

The conclusion therefore is that the settler movement will loose major parts of what they’ve strived for decades to build up. Further annexation of land or implementing the peace plan to it’s full extent will remap and transform these settlements into outposts – Bantustans within Bantustans.

The seculars, or let’s call them normative Israeli citizens will suffer dramatically if this plan is imposed. The proposed tunnel between Gaza and the West Bank will result in ground water pollution and perhaps communities to move away from that tunnel. What happens if there is a fire in the tunnel or a car accident? Will they travellers flee through an open emergency exit door and run away into Israel? The wet dream of Hamas itself.

Normative Israelis will be affected by the internal movement of both Arab and Jewish tribes – and with the ongoing housing crisis I don’t see where they should move. Israel will then need to build about 1,2 million new apartments in different sizes if it should cater for all affected communities – be they of Jewish or Arab origin.

A community who will suffer deeply are those living south of Gaza bordering Egypt in the Western Negev. There is a heartcry from a mother who wonder where she will move and what will happen to everything she built up. And her words are true, just like any of us affected in one way or another – it’s a trauma being forced to move or suffer the consequences. These areas who are labeled as future Palestinian industrial zones makes no sense – they are far away from it’s target population, they have no established border crossing to neither Israel or Egypt and finally the land there used for agriculture – green and thriving in the winter and spring will become a no-mans land. 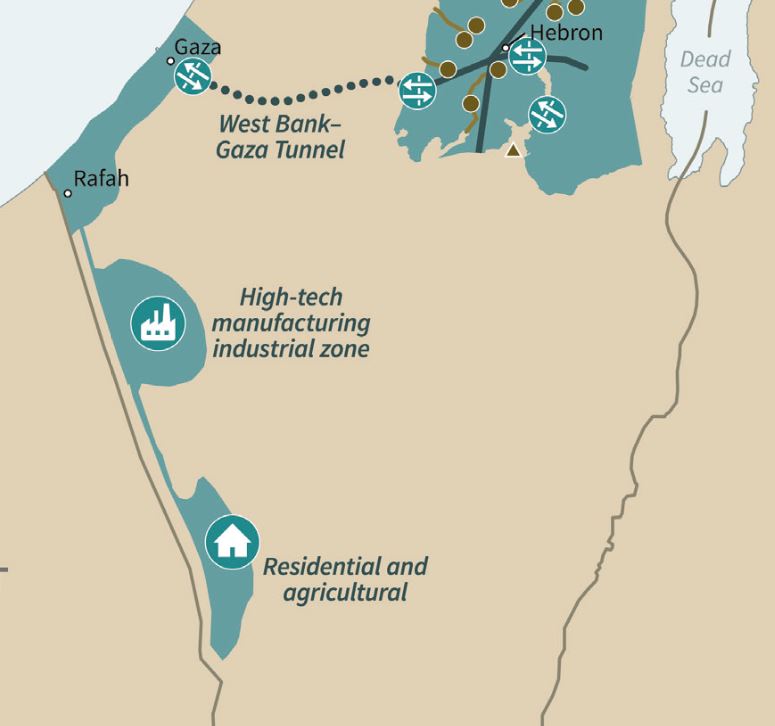 The western Negev land grab south of Gaza. (Copyright: None).

In conclusion the vast majority of Israels population will suffer from economic stagnation, uprooting, new demographic and etnographic consequences which I have hard time believing anyone wants.

The fifth tribe. It’s spread throughout the world with major concentrations in the US, the UK and parts of the EU. They also live in Russia, Belarus, Ukraine, Canada, India, Australia and more. So will they benefit from the Deal of the century? Will they suffer?

If the peace plan by some miracle, equals to winning a billion dollars on Lotto, goes into place and everything is done according to it – the diaspora will suffer more anti-semitism, BDS-activism at universities and campuses and a general change of discourse world-wide. They will be the one who will have to answer for Trump and Bibi, they are the ones who will be harrassed, they will be the ones who cannot wear religious attire in public. The plan will backfire at them – their choice will be to make Aliyah to Israel. But for what? Settling down in a country who has just or are undergoing social changes the world hasn’t seen since the Berlin wall fell.

The diaspora, which most of us once upon a time belonged to as well, live a harsh life. On which leg should they stand on? The national leg of their country of residence or Israel?

The final conclusion is that the Deal of the century will do more harm to all tribes than benefit them. While upholding current status quo casts a black shadow over Israel and the Palestinians – this peace plan is not what anyone wants. King Bibi couldn’t start his annexation party and Trump has already dropped this and moved on to his re-election campaign. And what does Jared Kushner do? Zilch. I end this conclusion with a map picturing all boarders being erected or standing as a consequence of the peace plan – do you want to live like this?

All boarders merged into one picture if the peace plan comes in full effect. Can you navigate through it? (Copyright: Jonas Amir Kadah, 2020).

*A total of 102 individuals from the five tribes were interviewed and stand basis for this analysis.