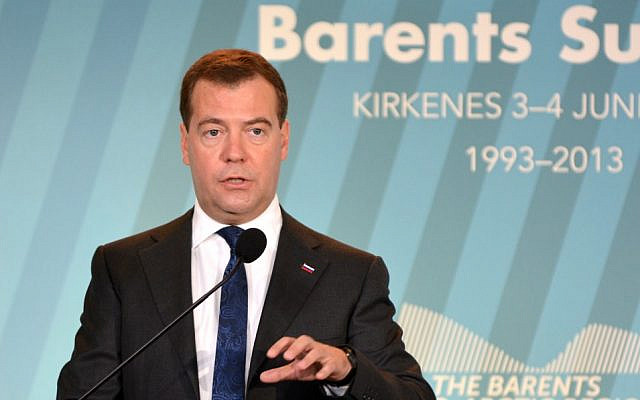 Prime Minister Dmitry Medvedev represented Russia at the Barents Summit in Kirkenes in 2013. He indicated Russia's plans to bring back the death penalty after being removed from the Council of Europe. (Thomas Nilsen/ via Twitter)

Many might say that with a war raging, it is no time to discuss the death penalty. I would disagree…and so would the Russians.

Russia was suspended from the Council of Europe on Feb. 25, after Putin’s invasion of Ukraine. Dmitry Medvedev, deputy chairman of the Russia UN Security Council chose that moment to comment that it is a “good opportunity to restore a number of important institutions to prevent especially serious crimes, such as the death penalty for the most dangerous criminals.” Quoted by RIA Novosti’s Telegram channel, Medvedev added that “by the way, [the death penalty] is actively used in the USA and China.” Russia also has announced plans for public executions in Ukraine.

So, permit us in the abolitionist movement a moment of reflection here. We often hear – not only from the Russians, but from many Americans – that the death penalty is reserved for the “worst of the worst.” This is not far from the truth, but not in the way we think. We usually feel this applies to the perpetrators of “capital crimes” – offenses punishable by state-sponsored killing. Depending on the country, these crimes range from the most heinous murders to the use of pornography or drug trafficking, or even homosexuality and perceptions of “blasphemy.” Like the citizens of the 70 percent of world nations that have abolished the death penalty, we the 1300 international members of “L’chaim! Jews Against the Death Penalty” believe that this is not the case: those selected for state-sponsored killing in fact are not the “worst of the worst.”

I regularly mingle with the population of people we Americans feel fit this bill and are worthy of killing. I am a former Jewish prison chaplain, a current multi-faith federal hospital chaplain, and the founder of “L’chaim! Jews Against the Death Penalty.” We correspond regularly with human beings with active execution warrants – people that we as a society have condemned to die. There have been about 50 human beings whom we have gotten to know in this way, many of whom have been killed by the state. In the process, we have discovered that this population includes both the innocent and the guilty. A prime example of an individual we believe to be innocent is Melissa Lucio, who Texas plans to kill this April 27. When it comes to the guilty, we have discovered first-hand that these individuals are not monsters, but flawed human beings just like each of us who have made terrible mistakes. Very often, these individuals have themselves suffered from horrific trauma and/or abuse. One need only read through testimonies from these “monsters” on The Death Row Soul Collective to see this truth. Of course, most reasonable human beings would agree that condemned individuals on Rows of Death who are innocent of any crime should not be put to death. It is when we encounter guilty individuals that vibrant debate invariably ensues…

And it is that very debate which brings to the fore what I have experienced as the “worst of the worst” in human nature. Let there be no doubt that many individuals who support state-sponsored murder are otherwise good-natured and compassionate individuals. I say this from personal experience: I myself was a good person, even when I used to support capital punishment. My attitude changed when I became a prison chaplain and met the people I felt we should be killing. It took me about 30 years of life to come to the epiphany that any state-sponsored killing of prisoners is a red-line that society should NEVER cross. Many others recognize this truth at a much younger age, from their earliest awareness of the existence of the death penalty. For me, the shadow of the Holocaust in my home and the desire for revenge against people who would commit such atrocities as those who murdered my family members severely clouded my thinking. I do not justify the attitude of my former self by saying this, but I offer it as an explanation and context for my personal walk with Malakh HaMavet (Hebrew: “the Angel of Death.”)

Having abolished this Angel of Death from my own mind and attitude, I have begun to see it very clearly in others. Some of us hide behind rationale like that which I put forward for decades – a frame of mind fueled by culturally indoctrinated misunderstandings of Biblical phrases like “eye for an eye” and philosophical renderings such as “violating the social contract.” Some of us are able to maintain a certain equanimity in hiding behind these notions and a complacency that this is “the way of things.” Many others among us, however, quickly become eager servants of the Angel of Death. We travel down an increasingly slippery slope from logic, compassion and wisdom to bloodlust, projection of fears, and a spewing of hateful and violent venom that advocates for painful deaths and maximum suffering of those who are guilty of capital crimes. I have witnessed this to my shock and horror on countless occasions in attempts at respectful conversations in person and on Zoom, as well as Facebook, Instagram, LinkedIn, TikTok, or other social media platforms. It is this longing for premeditated revenge and sadistic violence that is what I consider to be the “worst of the worst” of humanity –  the very fuel for the cycle of violence and killing that we hope to end.

I emphasize again that I used to do this myself. I am ashamed to admit it, but my hatred for Nazi and Nazi sympathizers led me to fantasize about the horrible ways that I would want to kill them in order to exact revenge for what they did to my family and my people. This quickly extended to other people who committed unspeakable atrocities in my own lifetime. In this way, the Angel of Death blinded me to the fact that I was becoming one of the very monsters that I considered these individuals to be – bereft of basic humanity and lost to lust for blood. The term “Death Eater” so aptly coined in the Harry Potter universe comes to mind when I consider what I turned into, and what I now see others become.

And yet, we should not be surprised by this. When we open the door to the Angel of Death, this is inevitably what happens: morals devolve and ethics dissolve. The Nazis discovered this when they became the first people to implement lethal injection as part of their infamous Aktion T4 protocol to kill people deemed “unworthy of life,” under the guidance of Dr. Karl Brandt, the personal physician of Adolf Hitler. It paved the way for horrors the likes of which the world had never seen. And we, too, in America have kept open Pandora’s Box, one which Russia now wishes to reopen. This is why, when asked about capital punishment even for the Nazi Adolf Eichmann, Holocaust survivor and Nobel laureate Elie Wiesel (1928-2016) joined others like Martin Buber who dissented. “Death is not the answer,” said Wiesel, who later added this:

Consider Wiesel’s words alongside this quote from Albert Camus:

“But what then is capital punishment but the most premeditated of murders, to which no criminal’s deed, however calculated it may be, can be compared? For there to be equivalence, the death penalty would have to punish a criminal who had warned his victim of the date at which he would inflict a horrible death on him and who, from that moment onward, had confined him at his mercy for months. Such a monster is not encountered in private life.”

THIS is why “L’chaim! Jews Against the Death Penalty” exists: to fight this “Angel of Death” – this “monster” that is the death penalty.

So, yes, the death penalty does indeed showcase the “worst of the worst” of humanity. It is not, however, those we condemn with this punishment who fit this bill; rather, it is what we ourselves become in its wake. Indeed, the death penalty condemns us ALL.

We cannot coexist with this Angel of Death. It is lethal by its very definition and we believe if left alone it will lead to the moral destruction of our society. It has happened to other cultures, and we believe it will do so for America. It festers in the shadows and grows like a cancer in souls throughout the land, souls marked by complacency, resignation, helplessness, despair, and bloodlust. The only answer is to banish it from these shores, and eventually from this planet. Only then can we begin to consider that the society in which we live is at all “civilized.” May we do bimheirah v yameinu – soon in our days!