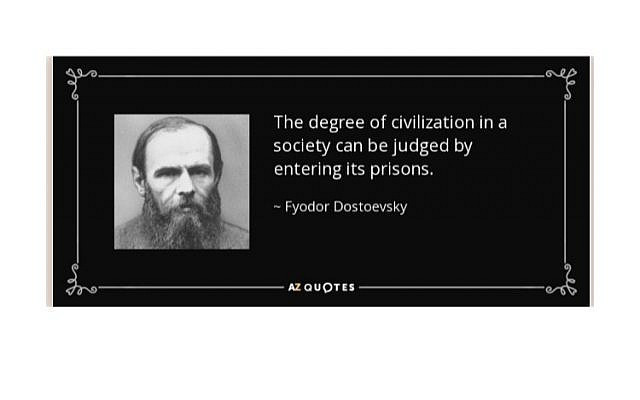 When any civilized human being considers the statement above from acclaimed Russian novelist Fyodor Mikhailovich Dostoevsky (1821-1881) – author of Crime and Punishment (1866) and other classics – what usually follows is an impulse to advocate for comprehensive prison reform. In the USA, we need not look far for examples of what exactly needs remedying in our system of “correction.” Horrific human rights abuses occur daily behind prison walls. Here are but two recent headlines that captures the worst of the worst of our society: “Florida Inmate Starves to Death, Unable to Reach His Food after Officers Paralyzed Him.” and “Attorney: Death row inmate on suicide watch severed penis.”  There are countless points to consider when we examine penal issues in need of reform: solitary confinement, inadequate mental health care, overcrowding, understaffing, drug abuse, the list goes on… I myself have witnessed the impact of many of these abominations first-hand as a former Jewish prison chaplain.

As we triage this list of needs in our moribund prison system, we at “L’chaim! Jews Against the Death Penalty” argue that one of the most egregious examples of these atrocities is the fact that we here in the USA still actively put to death some of the individuals we incarcerate. Dostoevsky left little doubt about his own position on the death penalty – and his was a voice of experience. It happens that Dostoevsky himself was spared execution for his “anti government activities” at the eleventh hour in Czarist Russia.  On December 22, 1849,  he was led before a firing squad but received a last-minute reprieve and was sent to a Siberian labor camp, where he worked for four years.

It is little surprise then that in his novel The Idiot, Dostoevsky writes that “A murder by sentence is far more dreadful than a murder committed by a criminal.” He goes on to explore in detail how “the true pain of death [is] far greater than the physical pain itself;” rather, the “true pain” is “the knowledge of the certainty of death.”  This wisdom reminds us of the sage counsel of another European novelist, Albert Camus, who penned the following in his Reflections on the Guillotine: “But what then is capital punishment but the most premeditated of murders, to which no criminal’s deed, however calculated it may be, can be compared? For there to be equivalence, the death penalty would have to punish a criminal who had warned his victim of the date at which he would inflict a horrible death on him and who, from that moment onward, had confined him at his mercy for months. Such a monster is not encountered in private life.”

We, the members of  “L’chaim! Jews Against the Death Penalty” are keenly aware of the psychological torture to which Dostoevsky and Camus referred. We reach out to every individual who is given an execution warrant in our nation. Often, these warrants come just weeks or months in advance of the state murder date, whereas in certain states they are given years ahead of time. We correspond regularly with many men and women who have this date hanging over their heads and are made to count down to the exact time of their annihilation. It is a plight so torturous and inherently insane that it has caused some of our pen pals to attempt suicide. What does this reality say about us as a civilization?

As Dostoevsky knew well from personal experience, the answer to that question does not bode well for us. Capital punishment reveals infinitely more about the society that enacts it than the human beings it condemns; indeed, it condemns us all. Let there be no doubt: the death penalty is not about “them;” it is about “us.” The Rev. Dr. Martin Luther King, Jr. powerfully articulated this when he commented that “capital punishment is society’s final assertion that it will not forgive.” When it comes to state murder, there is no marker more vile of our society’s outright rejection of the possibility of redemption in any worldly form. It is a slap in the face of any spiritual, legal or ethical tradition that is of any value to humanity.

This is why this issue matters and why it stands in direct violation of the Universal Declaration of Human Rights, as ratified by the United Nations. It is for this reason, among many others, that 70% of the nations of the world have abolished the death penalty from their shores. What more will it take for us here in the United States (as well as Israel and other first-world countries) to do the same?

We now hear from our pen pals on Federal Death Row that the USA – instead of working to abolish this medieval monstrosity on a national level as promised – is carrying out “mock executions” – in preparation for possible future state-sponsored murder in the name of all Americans. What would Dostoevsky – himself a “mock execution victim” – say to such a development? What do you say?

If this bothers you, we invite you to join us at “L’chaim! Jews Against the Death Penalty.” We welcome all allies and stand united against capital punishment in every single case, for both the innocent and the guilty. Many of us at L’chaim are, like myself, second- and third-generation Holocaust survivors. As such, we are aligned with Elie Wiesel, Martin Buber and countless others who realized after the Holocaust that a state with the power to murder its own citizens has no place in the civilized world. This applies to the United Stares, whether via its Nazi T4 legacy that is “lethal injection,” the various American gas chambers being constructed (including one that uses Zyklon B, as used in Auschwitz), or any other means. We agree that capital punishment is a racist, human rights barbarism that makes the United States a laughingstock as we deign to advocate for the advancement of human civilization. Elie Wiesel himself famously said of capital punishment: “Death is not the answer.” Prof. Wiesel also said this, which is akin our anthem at L’chaim: “With every cell of my being and with every fiber of my memory I oppose the death penalty in all forms. I do not believe any civilized society should be at the service of death. I don’t think it’s human to become an agent of the angel of death.”

As we gave Dostoevsky the first word, let us give him the last. “A society,” he wrote, “should be judged not by how it treats its outstanding citizens but by how it treats its criminals.” Imagine, then, what he would have to say about a society like ours that premeditatively puts its citizens to death. Indeed, Fyodor Mikhailovich Dostoevsky likely would be among the most eager to join in our group’s mantra, as we chant resoundingly: “L’chaim: To Life!”