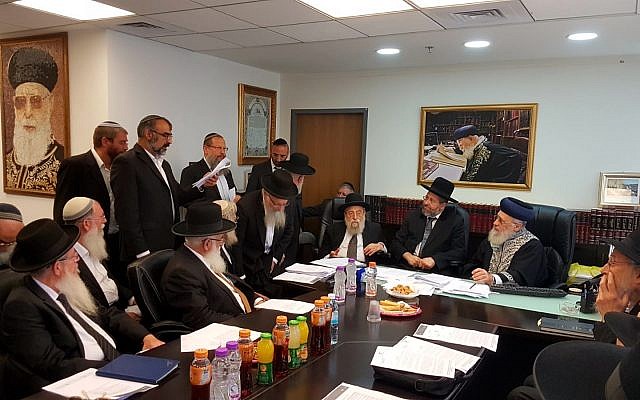 Illustrative. Israel's chief rabbis convene an emergency meeting with religious Zionist rabbis, against a proposal to overhaul the conversion to Judaism system in the country on June 3, 2018. (Courtesy of the Chief Rabbinate/File)

This has been a dramatic decade with regard to the religion-state relationship in Israel. It is true that, formally, the old status quo remains unchanged and has been maintained in the coalition agreements of the various governments over this period; in practice, however, there have been changes in almost all the significant aspects of this relationship, and the status quo seems less relevant than ever. Over the last decade, confrontations over issues of religion and state have rocked the country again and again, leading to coalition crises threatening to bring down governments, and which have actually done so on more than one occasion. Today, at the beginning of a new decade and as we approach a third round of elections, we can only hope that we will achieve greater consensus, and that the coming decade in Israel will be more attuned to on-the-ground realities and less enslaved to outdated and inflexible agreements and ideas.

The main issues relating to religion and state in Israel are observance of Shabbat, conversion, marriage and divorce, religious services, and the kashrut market, as well as (more recently) the agreements on how prayer should be conducted at the Western Wall. Most of these issues have aroused significant conflicts over the last decade, and the reality on the ground has changed significantly. Against the backdrop of the inability of politicians and the national political system to reach agreements and decisions on questions of religion and state, different factors have played a key role in the reshaping of these arrangements: Rulings by the High Court of Justice; market forces; and civil society organizations and initiatives taken by municipalities.

The most significant upheaval, which reached new heights in recent weeks, has been the issue of Shabbat. Over the last decade, the scale of commercial activity on Shabbat has expanded considerably. In addition to out-of-town shopping centers we have seen supermarkets, stores, and even malls opening in town centers, despite this being explicitly forbidden by municipal bylaws. Many municipalities have simply chosen not to enforce the law. In Tel Aviv, where there is large-scale demand for (and supply of) commercial activity, the municipality has amended the relevant municipal bylaw and allowed businesses to open on Shabbat legally for the first time. As is usually the case in Israel, this issue was brought to the High Court of Justice, which eventually recognized the power of the municipality ty to pass such a bylaw. In turn, this led the Shas party to promote the “Supermarket Law,” in an attempt to reverse this development. The finale for this decade t was the decision by several cities in the central Gush Dan region, to begin operating public transportation on Shabbat, taking advantage of the ongoing political chaos at the national level in order to change one of the cornerstones of the traditional status quo—banning public transportation on Shabbat. Thus, in spite of the national law and an overwhelming majority of municipal bylaws outlawing commercial activity and public transportation, the reality on the ground is completely different.

Another issue in which there has been significant change is the kashrut market. According to the current legal arrangement, the Chief Rabbinate holds a monopoly over kashrut certification in Israel. At the middle of this decade, private kashrut organizations began to challenge this monopoly, offering kashrut services to businesses who upheld a high standard of halakhic observance, in defiance of the law. As with the issue of Shabbat, there was a breakthrough at the High Court of Justice, which authorized the operation of these private kashrut services after conducting two rounds of discussion on the issue.

There has also been significant change in the most thorny religion-and-state issue of all —conversion. After years of harsh criticism of the Chief Rabbinate’s strict policies on conversion, and following the torpedoing of a proposed reform that would have also allowed municipal rabbis to perform conversions, a group of Orthodox rabbis set up an alternative conversion system, offering halakhically valid conversion, but under less stringent conditions. In this case as well, it was a High Court of Justice ruling, which recognized these private Orthodox conversions, thus lending the process important support. As a result, these conversions are now recognized by the Ministry of the Interior, though not yet by the Chief Rabbinate.

Unfortunately, in the area that affects most of Israel’s citizens — marriage and divorce — the hoped-for changes have yet to emerge. Even now, at the beginning of the 2020s, any Israeli wishing to get married in Israel, even if he or she is a profound atheist, can only do so via a religious ceremony, and any Israeli seeking a divorce must come before judges who function according to manifestly non-egalitarian religious laws. While the demand for marriage under the auspices of the Chief Rabbinate has dropped in recent years, and many Israelis are finding alternatives to religious marriage ceremonies, there is still no freedom of choice on this issue.

The last decade has also seen another unusual development, which has a significant effect — and will likely have even greater impact in the future — on agreements with regard to the relationship between religion and state in Israel. Israeli society has become more traditional, and Judaism has become more popular and fashionable. Because of this trend, many Israelis are now more aware of the meaning of religious ceremonies, and wish to have more of an influence over their religious lives. This traditionalism, despite its affinity to Orthodoxy, is not necessarily synonymous with strict adherence to Jewish law. Thus, these Israelis may want more Judaism in their lives, but at the same time — less religious coercion, and more opportunities to choose how they live their lives.

Will the next decade finally bring proper regulation and balance between these complex relations between Judaism and democracy, and between religion and state? One can only hope. Israeli society is still young and dynamic and is in a state of constant flux, as are its values and the worldviews of the different groups making up the mosaic of Israeli society. The goal of reaching a stable and proper balance for the relation between religion and state is a worthy one, and one which may also be realized, given the right constellation of circumstances.

About the Author
Dr. Shuki Friedman is director of the Center for Religion, Nation and State at the Israel Democracy Institute and a lecturer in law at the Peres Academic Center.
Related Topics
Related Posts
Comments