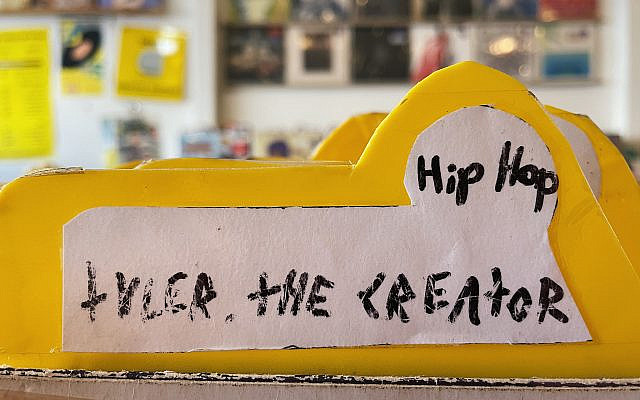 Tyler, put down the gun.

Mr. , The Creator has created, and recreated, nothing more thoroughly than Tyler. That at least is our impression after having retracked the elapsed space of ten years and eight albums, to the first official release, “GOBLINS”. The eponymous track opening this album manages three things, and nearly simultaneously: it produces shock, while gaining our audial as well as our cognitive interest. That is, after we shake from our spine the frisson produced by the initial blast of asterisks and other obscenities, we find ourselves attentive not only to the music and rhymes, but semi-involved in following the memoir it recounts.

Throughout the track, Tyler’s spoken voice is counterpoised against the droopy bass of a second figure. “Tell me what’s been going on,” intones the deep, slightly warped voice, who we are given to believe is Tyler’s psychiatrist (those familiar with the self-released album, “Bastard”, already know this as the bungling and tactless Dr. TC, high-school guidance counselor). With that gentle inducement, the wayward ward rips out a wrathful page from his diary, reads it off, sets it aflame. Between the breaths in this mad monologue, the therapist inserts his own feckless commentary, registering tepid agreement (“As you should”) or schoolmarmy disapproval (“Tyler you’re gonna have to cut down on that ‘faggot’ word, that’s a bad…”) Sympathy is given in the form to which it is least likely to be taken, the ingratiating platitude (“it’s not your fault”; “you’ll be fine.”) I hope “our youth”, to which Tyler, never forgetting that he is one of them, makes frequent appeals, is provided more competent counseling than is provided here by the bumptious doc.

The song is a throaty, extempore rant–a rage against both the machine and its operators. Suicide, murder, suicide-murder, parent abandonment, regret, vengeance, nostalgia, self-pity and hate, hate of everything else. (Love, when it comes, is never platonic).

“Whoa…” remarks the unsuspecting doc, a soundboard for the audiences’ own emotions.

The therapist’s clock runs over to track no. 2, and we ask, “is he going to ink blot this theme over the whole album?” but have already seen that he has. We are thus made the official sit-ins on a psychoanalysis session, and so we nestle in for the role, and lean forward; perhaps adjusting to our new position as sub-doctor by adopting the psychoanalyst’s accoutrements of manner– the contemplative chin-stroke, the slow, knowing nod. Maybe we brow-furrow or lip-purse as we scrawl a mysterious note prompted by a particularly provoking lyric (of which we have enough), or a particular disturbing one (of which we have more than enough).

“I’m left speechless,” speechifies the voice, as the dialogue progresses in this vein (cuttingly). A Taylor, of the Swift variety, is made mention of, and the near namesakes are put in apposition–in a certain literal manner. (This is made the more outrageous when we reflect that the album was put out in 2011, which would make the now adult popstar a small town poptart.) And there is another Creator, who doesn’t need a first name proper to know Him, who is also brought down and blasphemed. While Tyler, The Creator prostrates Taylor, the Swift, he would never think of prostrating his creating self before He from which he himself was created. (“Jesus called, he said he’s sick of the disses. I told him to quite bitchin.” This, we should remember, was still before the coming of Yeezus).

The river of imprecation and house-poxing may have stunned our senses at first, but down-river it becomes a cataract, and deluges us. The speechlessness of shock is quick made the speechlessness of one simply dulled—a dumbness in face of the dumb. Shock is an art which depends for its efficacy on the administered dosage. When mid-album we are still talking about the shwift of Swift, onanism (self and other-inflicted) and all variation on the inguinal theme, we are left more flaccid than roused. The insistence of the thing can be charmless; and as predictable themes become puerile, they betray Tyler, The’s adolescence, a precociously talented adolescence though it was. But kids will be kids, as the inept Dr. TC would no doubt say, and misanthropic suicide-prone wunderkinds will be just that. In that respect–or rather, disrespect– Swift fans ought to curb their umbrage over the impiousness shown their demi-Goddess. Gobs and gobs of gaff make up GOBLINS. The album is filthy fun and, despite its overall sophomoric theme, is studded with the sometimes poetic and often hysterical (in the non-medical sense) line . Millennials who seek to do away with what disturbs their sensibilities by interdict and blacklisting will find themselves in political polity with conservatives like Theresa May, who placed a ban on both the album and its creator.

By album’s end the warped effect given the good doctor’s voice soon reveals its significance. Little shock is this time had in learning that that low voice playing goblin’s advocate was really the mad Tyler’s alter-ego, an audially manifested figment. (T, The C might have given us more of a riddle than “Dr. TC” if he meant at all to keep us puzzled.) The deep-set voice was, it appears, deeper-set than we imagined.

Or rather, Tyler imagined. And then we reflect, if everything on this album was ultimately revealed a fiction—the rant and the responses to it, the album’s guests and, presumably, the music along with it—then the listeners too, can reasonably be thought to be a fabrication of Tyler’s creation. Which would mean that I, would mean that you, this very article…wait. Tyler, The Creator has also created…Whoa.

This album, having reached its decennial, is not ten years aged if ten years later it can be listened to with profit. I retain that much music of old is far more advanced than most music at present. Classical/contemporary— these are facile terms, useful only for taxonomy. Music, like literature, is “contemporary” so long as its enjoyment is present. I have presently somewhat enjoyed this one.