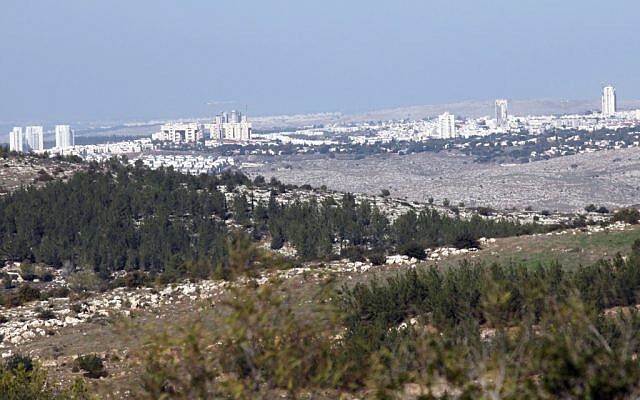 Illustrative. Modiin, and the hills around the city. (Yossi Zamir/Flash90)

On morning runs inside Modi’in, during the past year or two, I have encountered wild boars, jackals, turtles and hedgehogs. After 20 years of running the same trails, it is a new experience. More and more, Israeli communities find themselves in direct contact with wild animals whose habitat is usurped by humans. They simply have no place else to go. When the surrounding hyena population discovered the ample food supply in Modi’in garbage cans, they became an exciting attraction for our otherwise sleepy bedroom town. Notwithstanding the thrill in seeing wild animals up close, it does not bode well.

We all have a clear notion of how the present coronavirus epidemic unfolded and its proximate causes. The zoonotic nature of the virus is widely accepted. The social mechanisms of the illness’s rapid transmission also are well understood. But it seems that we have not really apprehended the role that overcrowding and population density play as critical indirect drivers in the pandemic pathology. There are two main factors at play.

The first is that an increasingly crowded world is witnessing outbreaks of zoonotic viruses with growing frequency. The rate of infectious disease epidemics has quadrupled over the past 50 years. Based on the locations of these viral hotspots, the new dynamics are often attributed to the steady encroachment by humans on wildlife habitat.

Experts confirm that the COVID-19 virus evolved in an animal host and then “jumped over” to infect people. This is the way several recent epidemics began.  If one considers the broader pathology, the present coronavirus outbreak is part of an imbalance between human beings and our natural world.

Recent pandemics emerged from East Asia and Africa, places where people increasingly come in contact with wildlife populations. There are grave implications. That’s why China recently decided to ban trade and consumption of wild animals, a welcome step — for both public health and biodiversity protection

While China’s population is finally starting to stabilize, the overall demographic patterns in the country are not changing: hundreds of millions of people have joined an unprecedented rural-urban migration. Wuhan – where the coronavirus plague began – is an example: In 1985, there were 2.5 million people living in the city; today — well over 11 million.

The second way growing population density drives the coronavirus pandemic involves the way the virus is transmitted. Epidemiologists have long relied on the reproduction number — or in technical jargon: R0 – (R naught)  to design strategies for confronting infectious disease. R0 is defined as the number of cases, on average, an infected person causes during their infectious period. If that number falls below 1, the epidemic wanes. A disease with a high R0 spreads quickly.

Measles is a particularly contagious illness — with an R0  of 12 to 18.  Estimates for the infectiousness of COVID-19 are lower and have been reported to span 1.4 -3.8.  It is well to consider the reasons behind these broad ranges.

Many factors determining R0 are beyond our control. These include the infectiousness of the agent; its incubation period; and mode of transmission.  One critical factor, however, is not built-in biologically: population density. When people live in dispersed rural environments, there is less human interaction and lower transmission.

COVID-19 is transmitted via airborne droplets. People must be near someone already infected to catch the virus. Reducing the effective population density in public meeting places is the basic rationale behind the quarantine strategy favored by most countries responding to the outbreak. But as more and more people live in crowded cities, it becomes harder to control a pathogen that takes days to manifest.

These two demographic factors influencing epidemic dynamics — human encroachment on habitat and denser living conditions — are especially germane in Israel.  For decades, we have hemorrhaged open spaces, with human settlement supplanting habitats and farm lands. Recently, Israel’s ecological agencies published their bi-annual “State of Nature” report.  Among its conclusions: “The rate of land-cover conversion between 2014–2017 was the highest in the last 20 years, during which, approximately 55 km2 were converted from open landscapes into built-up areas.”

Even counting the Negev, Israel is among the world’s most densely populated countries. Population momentum will probably double our numbers during the next 30 years. For those who rely on public transportation, enjoy cultural events and utilize public venues — physical proximity to other people will increase. There will be even greater demands on our overrun hospitals. Already today, large Israeli families, confined to small apartments are finding it very hard to respect quarantine restrictions. This challenge will also grow harder. In short, we can expect our country to become ever more vulnerable, should pandemic dynamics arise in the future. Unfortunately, it is likely that they will.

This is a time when economist Milton Friedman’s observation is frequently quoted: “Only a crisis – actual or perceived – produces real change. When that crisis occurs, the actions that are taken depend on the ideas that are lying around.” When the coronavirus pandemic subsides and Israel looks for lessons, adopting a strategy to stabilize the population is an important idea that needs to be on the table.