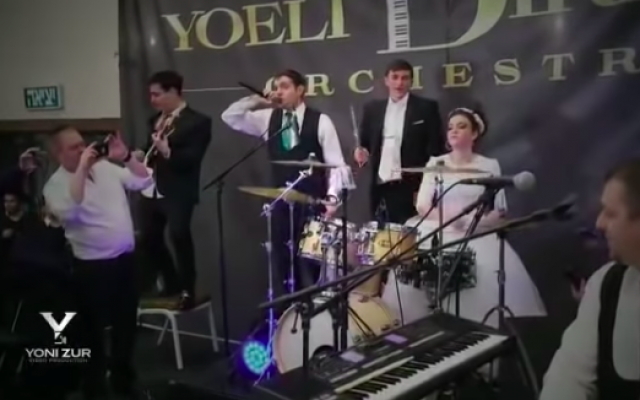 Screenshot from the video which was subsequently taken down.

Recently, a young bride played the drums at her wedding. Fully dressed in her bridal gown, not singing, she played on stage with the band. Someone recorded the performance and it was shared with the Badatz, the kashrut department of the Eda Haredit, which supervises the food at the Bnei Brak wedding hall. The kashrut supervisors called the hall’s management, asking why they did not turn off the electricity in the hall as soon as the bride began to play. The band then was made to apologize and never let such a “breach of modesty” happen again.

What does a bride’s behavior at her own wedding in front of family and friends have to do with the kashrut of the food at an establishment? On whose authority would they “turn off the electricity of an event”? The bodies that are arbiters of what food is kosher have taken it upon themselves to supervise women’s behavior as well.

The Badatz’s threat to the kashrut status of the venue because of the “permissive” conduct of the band is a bully’s tactic. Moreover, in one fell swoop, they created a new norm. Now, no young woman will be allowed to join the band at her own wedding, no matter how briefly, if the band wants to be able to play venues with this certification.

Most of the admittedly non-Haredi online spectators to this drama have been outraged at the behavior of the Badatz. Some, however, have called for tolerance.

All would agree a woman playing an instrument is not objectively prohibited. Apparently, some communities would define it as a subjective breach of modesty, and we need to recognize that they are entitled to do so.

Firstly, while some communities may actually consider a woman playing the drums as a breach of modesty, this bride’s community did not. No one in that wedding hall objected to the bride’s performance. In fact, they celebrated with her, singing and cheering!

Secondly, the notion that everyone must tolerate all practices, simply because some people do them is illogical — and worse.

Tolerating intolerance reinforces intolerance. If a community decided to keep young girls in swaths of black cloth over their faces, and call it modesty, must all those who don’t engage in this (concocted) practice accept it? Are there no red lines in Judaism? Or are we all just that PC in the name of tolerance?

…if a community wants to adopt a standard of women not playing instruments in public, it is not only entitled to, there is something admirable about its conscious effort to enforce a sense of modesty. However, the goal posts of modesty for the rest of the Jewish community isn’t moved because of it and nobody should be measured or judged by it.

If there is something admirable about the “conscious effort to enforce” this degree of a sense of modesty, then why shouldn’t the so-called goal-posts of modesty for the Jewish community be moved as well?

There is nothing admirable about enforcing a modesty so extreme that those who are modest disappear. We, as Jews, cannot go down the road of coercing women into anything.

It must be noted that those moving the goalposts are men; women and girls have no influence over the policies that affect them. This is the elephant in the wedding hall. Women are most affected by these “admirable efforts towards modesty,” yet, they are not consulted and the impact on them is not considered.

And of course the rest of the community is measured by those goalposts. This is exactly how we ended up with the norm of erasing women in Orthodox publications.

Indeed, what started with the most insular groups of Hasidic Jews, who observed the most restrictive policies in Judaism, has now become mainstream, as publications and institutions play to the lowest common denominator.

Erasing and silencing a bride at the drums on her wedding day, or a modest woman in magazines, is not modesty. Rather, concealing women turns women into sex objects the same way that exposing women does– treating a woman as nothing more than her body, to be shown off or hidden, as the case may be, reduced to her sexuality.

When we allow bullies to determine cultural norms, we allow harm to come to our community.

It is our job as Torah Jews to find the middle ground – not to turn left or right, as the Torah says, but to use the guidelines – halachot. We have to walk with God and behave modestly as a community. These guidelines exist because we are meant to interact with one another. Women were created to be seen and heard, not erased and silenced.

We, the community, must determine the norms to which we are beholden, based on Torah, not extremism. We cannot – must not – normalize extremism in the name of tolerance.