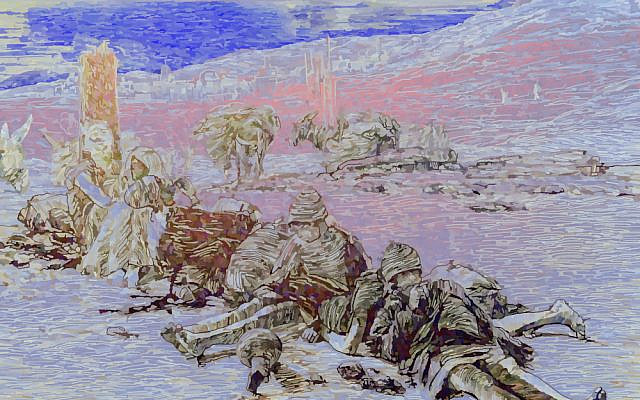 In this scene the Eternal Jew visits some vacation sites in the desert.

An so began my long descent from the center of the world, from the throne of the Lor, like a spark shootin’ from a fire pit. The blacksmith took the red hot rod from the coal. Wide the arkin’ swing. Muscles ripplin’ down his arm as the sledge strikes. Sparks fly and sweat spatters, and me, a spark sizzlin’ on the ground. The Lor annealed His spirit onto my soul. And me, I shivered like the hot iron seared in the shadowy and rose-tinged glow of the forge, anvil of worlds and souls.

Anyways, that’s how it felt in me, but maybe it’s better to describe it like this: God’s eye been on the nations. Out of His house in Jerusalem Adonai surges through the murky froth of worlds. Sparks fly and demons flee. Mountains tremble and hills skip. Souls divide like the Reed Sea. In the void behind Him the swirling vortices of dust and debris, bodies and beliefs, nations and homes tumble and blow in the inward surge. Us Jews flowin’ into the veils and dances of many lands. Where our Lor goes, so go we. Where we go, so goes our Lor.

Sunrise come, and once again I’m on the caravan road, on to the land between the rivers, Bavel, where the remnant of my people dwell.

Ever more drear, ever more sick the land and the people and us travelers, too, as we cross the desert expanse to the east of Palmyra, headin’ opposite the sun. From camp to camp, well to well, we made our way, draggin’ our feet through coarse sand and dust. Not long til we look like a walkin’ troop of chalk men, death-ghosts, spirit thieves bringin’ terrors on the local folk. In fact, they know us very well — dust caked men, driven from homes by troubles without or troubles within, the need to escape or the need to run.

All them motives workin’ on me as I searched out Aden hid in this world.

And like our visage of chalk and death, so these encampments where the locals are sunk. A collection of mudbrick courtyard walls with rotten and saggin’ wood gates, all piled together like an ant’s nest crumblin’ in the burnin’ rays of sun, or meltin’ in the rare and peltin’ rains. And wanderin’ amongst them, naked kids, half dust and crud, half skin and bone; the mysterious women wrapt in sheets, their coarse and raggedy, grayblack wool; the men, suspicious and hostile brutes, unshaven, wrinkly, filthy, scarred.

‘Course, that’s the prosperous part of town. Sprawlin’ out from the settlements the poor folk, squattin’ or sittin’ in dirt under patched tents of raw black wool. A pot hangin’ over bricks of dung that glow and spark in their smoky burn. Their children follow our camels as we pass, collectin’ the dung, and throwin’ stones, and cursin’ us, or beggin’ bakshish.

We, the death spirits passin’ through, and they, the living bound to the earth.

Oh, and maybe sometimes a little garden: a couple of rocks and a board or two around a gnarly table on a stump, where they sell you brackish water or chai served in misshapen clay cups, half baked — the water seepin’ right through.

No place to stop in these lifeless parts. When our shadows begin to stretch way out in front, like we was cypress tall, if we was lucky there’d be a khan. Otherwise, we’d circle round at some upthrustin’ rock which in this changeless plane would act as a little natural fort. We’d set up sentries and eat a small bite and drink a couple of gulps from a skin, just enough to piss a few drops.

Sudden, the dark and chill comes on and the wind lifts up its bitter howl, as if the sands were cryin’ a dirge or chanting a blessing for the parched land. Long them nights in the shivery air. The stars tremble their needles of light not so far away in the heavens above.

Walkin’ them harsh and chalky paths, my thoughts kept bendin’ back to that sheikh and his bitter and snarly spikeful words when he talks of our God, our Adonai. I never heard such jaggery hate fillin’ the words of a spirit talker. As if he was personally fighting Adonai in a battle against the spread of our Lor.

Over and over I turnt his tale. And then it rung me like a clangin’ bell. He said them fleein’ demon gods leapt down into the human soul. And there they was, in his soul too! Them demons themselves was talkin’ him, waggin’ his tongue to spread their hate. Ridin’ his soul like a trained horse into the maw of death, to fight their wars.

An there I stood like a simpleton, an untrained peasant on a battlefield trampled by an angry horse of war.

Okay. They cut me down that time. But my day ain’t over. My war ain’t done. Time to learn how to wield a sword.

In the next episode our hero reaches the Garden of Aden.