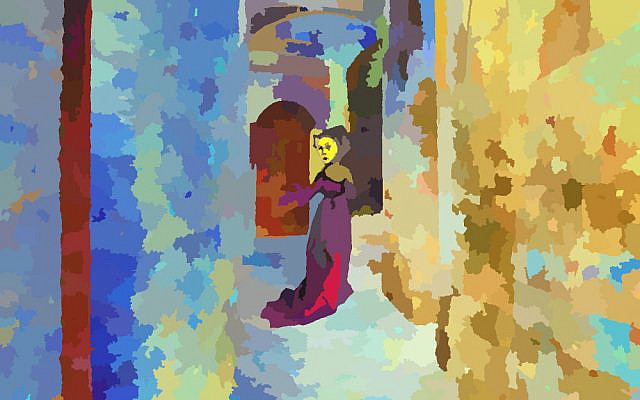 Lost In the Palace; modified and colorized image derived from a photo taken by the author.

In this episode a little bird gets caught by a wolf.

Two queens and their bishop checkin’ the king. He scans the board. Is it mate time for him? His knight and a castle are flankin’ him.

To break the strength of their united force he attacks the weak point, their center:
“You Jewess, usurper, you climber on backs, asserting your heresy on a land which is mine. Now you are dragging my beloved queens into your infidel, rebelling schemes. Name a kingdom that elevates the weak, privileges the foolish above the wise, prefers the incompetent over the skilled, squanders money and time on girls?!”

Among the crowd there’s murmur and buzz, and a few men shout ‘huzzah’ and ‘yah’! But he plays right into his women’s strength. His queens step forth in a matin’ check. First Katrina asserts herself.
“You say we are weak and foolish and inept. Then why do you come to me late at nights, asking advise on affairs of state, or how to manipulate vassals and popes, or whether some prince is a friend or foe? Why is it, that you sign the laws and decrees that I suggest and I insist on? I was the one that urged you to set the price on wheaten bread so every person standing here has bread to eat, rich or poor! If women are made of jabber and sloth, why do you come all slack jawed to me? It seems to me the men that won’t listen to their women are the biggest fools. Only thing men know better than us is chasing whores and waging wars!”

Now the murmur of the crowd rumbles out loud. Well, it’s mostly women. What do you expect?

Then up slides Zenep from the other side. Instead of talking, she calls to the girls,
“Come here students to meet the king.”
Then up like gagglin’ ducks and geese, twenty two girls, all giggle and blush. Then what do you know? A mother runs up, takin’ her daughter’s hand, all proud, and the rumbly crowd turns into a roar. More mothers run up, and there’s more than one shout,
“I wants my girl-child in that school too!”

You can see the snarly frown on the face of the king soften and loosen a bit. Not to a smile; still a frown but knowin’ it’s checkmate and time to re-start. Like a father preparin’ to strap his girl when her sisters rush in, pleadin’ in tears,
‘She ain’t done wrong pap; don’t thrash her, please.’

That night Batkol composes a plea to the simmering king, and this her theme:
“Let this school be the first in the world to educate girls like we educate boys. And this to establish Garnottah’s place at the forefront of lands in all the earth. And let it stand as a testament to the greatness, wisdom, nobility of our king Badis ibn Habus.”
Readin’ her plea, it softens him more, and so for a time Batkol avoids his wrath.

So the school grew at a turbulent pace but I won’t tell about the squawkin’ and squalls, the talk back and push back and back-bitin’ dogs, whenever a yoke is removed from a horse and it rears and nays and leaps and sprints.

There comes a day when one of the girls, Mariam by name, well bred and well formed is sent to the private quarters of the queen to retrieve a scroll of her favorite tales. Many’s the stairwell and corridor from this far side of the waterworks that heat the harem and feed its baths, to the queen’s penthouse up in the clouds.

Like a little wagtail off she flies with a happy chirp and fluttery wings. A door here and a hallway there and, not so hard, and here she is. A tap tap tap at the apartment door and soon enough a gravelly voice,
“Who goes there at the guardhouse gate?”

Oh, flutter away and flitter up stairs, and now a hearty and bellowy laugh from a woman wide as three of her mums:
“What wants this missy from the kitchen staff?”
Now chirpin’ and flutter and fluster and flee through a prisony maze and clatterin’ steps. Finally, finally she finds the door.
“Is this the one?”
And she timid taps.

A door swings in, and out billows a cloud of steam, sweet with lavender mixed with lemon. Oh, what is this?

Then quick, a long arm reaches out of the steam, grabbin’ her arm and pullin’ her in. Then the door slams shut. Thick the gloom, all hot and moist and muffled sounds of splash and drip, whisper and sigh.

Our little wagtail can barely chirp,
“Is this the queen’s apartment here?”
Some quiet giggles answer her, Then,
“No, young miss, it’s the harem bath. But worry not; you’re safe in here.”
As panic fades, calmin’ a bit, she begins to see: Here’s a large room with a high dome and many a nook that opens on it, each with domes and a circle of lights where the sun shines down in sparkly beams. On benches a handful of women lounge, some wrapped in a towel, some drippin’ wet. And some sitting alone at marble sinks all sudsy and scrubbin’ with fragrant soap. And the walls, glory! Heavenly tiles, azure and ivory, ruby and gold, in zigzag patterns and florals and stars around the room from ceiling to floor.

And here’s our young wagtail, Mariam, who lives in a two room mudbrick hut.

Many’s the sleek cat and weary dame, pink blushed peaches and wrinkly prunes that gather around this child of the street.
“Oh sweet. A student of our lady Katrina,” coos one maid. “What’s your name?”
“Mariam, your highness. I was sent to fetch a book for my teacher, our queen Zenep. But I am o-so-lost. What should I do?”

“It’s nothing dear. We will take you there soon as we dress and braid our hair. But you know, your name is an honor on you. First of women, the mother of God, who brought down heaven’s protection on you and fills your limbs in a truest faith.”

“Oh, there she goes again, tanglin’ a name with a fate. I say its Magdalene that suits this Mariam, fresh as she is. She wandered out of the right way, capturin’ eyes and lurin’ hearts, but stumbles back into the court of the king, baptized in troubles and seeks to be redeemed. That’s her namesake, who truly lived in this world, not that Mary myth.”

“Oh you Christian ladies and your Christian tales! The best of women was other than that, a breathless and lithe and liquidy lass from far Teman* and the spice trade. The best of women is from my land, more beauteous than all of them. Sheba’s the one, like a whirlwind gatherin’ up kings in a heap at her door; like a whirlpool that captures ships; ships of all lands were bendin’ to her til the greatest of all, that Solomon comes bowin’ to her to be his queen.”
* The Yemen

“Oh, you and your Sheba! You think you’re her with your whirlpool eyes and your half-bare bobbles. But our Egyptian women with our olive skin and our ancient wisdom… who can compare? A thousand stories and illuminated books tell of Zuleika, the foxy wife of Pharaoh’s priest, a priestess herself, who broke all chains in pursuit of love, of Yusuf, the prophet of the Lor most high. Mariam, let her be your guidin’ light.”

“If you’re talkin’ foxy then Helen’s the one, from my land of restless and wine dark seas and women whose skin is gilded by the sun. A thousand ships came armed for her and a thousand epics tell of the wars of men who thought they could own her splendor. I’m waitin’ for the ship that will liberate me.”

“Don’t talk like that, Ophelia dear. There’s many a guard all intolerant, and many with daughters eyeing this place. And it’s just a few short steps from this bath to the street.”

Then the women grow quiet, all glancin’ around.

Click clack; loud ringin’ steps in the hall. Thrum drum; a heavy rap at the door. A moment, and the door thrown wide open, and in like a horse all foamin’ to ride, the king. He stands there, eyes aflame.
“You! I want to see you upstairs!”
And he points, and Ophelia murmurs, “Yes, sire.”
“Not you!” he sneers. “That fresh one there,”
And it’s clear he’s talkin’ of Mariam.

In the next episode Mariam, it seems, becomes a fox.