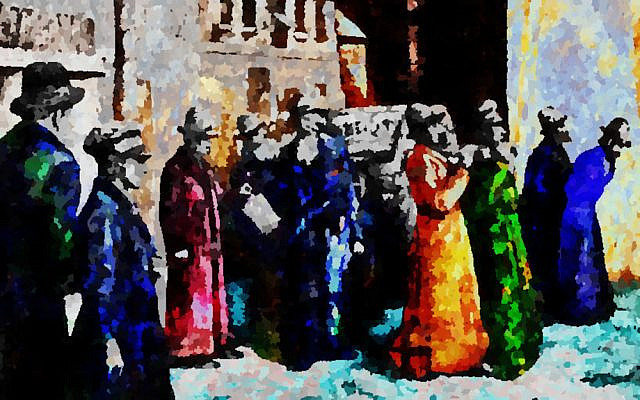 In this episode you’ll read about a poor sap lying in a prison cell, and a funeral procession…

I learns of the fox when I gets to Metz where a letter from Batkol brang me news. Well, the letter just touched on this in brief, so I filled in some talkin’ and maybe some more, but, no doubt, I ain’t strayed far from the facts. Of course, I was inclined to just transcribe her letter direct, but sorry to say, it was stole from me on the road from Metz.

Truth is, so much been took from me  these many zigzag ragtag years, in my sleep or secretly or tore directly from my hand:
Letters, books, shivitis, shofars, mezuzahs, amulets, tefillin, tallits, all kind of silver, from kiddush cups to coin, filagreed candle sticks, filagreed yads*, tzedakah boxes inscribed and inlaid, pearls, portraits, poems and prayers. Such documents as are beyond all worth, that the wise and the holy, if they could just read, their minds and their souls would pass through the veils of this coarse, corrupt and carnal world, this false, in-folded and fractalin’ facade. They took a gold tooth out a my mouth and the stinkin’ and raggy shirt off my back.
* pointers used for reading Torah

But don’t go thinkin’ I’m just bad luck. I seen the same for so many folk. And you could be next. Are you holdin’ tight?

Okay. I jumped ahead a bit. Last I told you, I sat in a hole, waitin’ the hangman at first light.

Terror a-gripped, as I lay in filth, when the door creaks open, I’m grabbed by my cloak, and I hears another man thrown into the cell with the crack of his skull and an awful groan. Whisper: “Git movin’, quiet and fast.” But me, unsteady, and the rustle and clop as I stumble and slip, enough to stir the whole place. Then like my head been hit with a sledge, a hand slap my face.
“Steady yourself,”
and then on my shoulder a cloak is thrown and I’m told to slip on a pair of boots, and then a helmet, and now we must clop with a ‘hep’ and a ‘ho’ like guards on a march. And out to a courtyard and through a gate.

It seem that thug that thrown me in jail, he’s the one I was meant to find, the spy embedded in the palace guard. Sittin’ in a safe house, I’m all confused, hungered as a horse, and giddy too as the light of day shines and my head’s still attached.

It occurs to me:
“Who was that one thrown in the cell to replace me?”
My savior may be lackin’ in social skills, and as for compassion, he knows none of that:
“Just a piece of merde to take your place.”
And I thinks of the goat on Yom Kippur, for Azazel and for all our sins,* and I wonder who will be forgiven.
* Vayikra/Leviticus 16:8, 21-22

“You need to get out of here,” he says. “I have enough crap. I don’t need you.”
Restorin’ my letters, and a crude map, and a letter a passage for the border at Gaul, some coin, old shoes, some course black bread. Evening and shadows obscurin’ the lane, he fairly pushes me out the door.
“Find a place to stay or hide before vesper bells, or the curfew guard will hang your ass on the nearest pole.”

“Thanks and best to you as well.”

That’s how we trek the lands these days, lawless borders and lawless roads; trustless men, suspicion and greed. The arm of justice is short and bent.

A month of roadin’ and changin’ names and here I am in the verdant vales of Metz, preparin’ to meet the Rav, Rabbenu Gershom, the light of galut*.
* Hebrew: exile

A little aside.
How long it’s been since my thoughts turned to Aden. How far the road to Jerusalem. How far our Lor, the ways in You. Once I thought I could walk the way. Then I hoped I could find the way. Now I wonders if there is a way. How far, our Lor? The eye can’t see.

Yet, this is the Palace our Lor created, this world and its talkin’ spirits, us. If we say it is fallen, we are to blame, and we are the architects to renew the Ark….

So I finds my way to the street of Jews, but every alley and lane is blocked with crowds of people shovin’ and wild with wailin’ and screamin’ and beatin’ of breasts.

Into a passage lined with stalls sellin’ belts and shoes and leather goods, I push my way just to free myself from the crush. A man signals to me and rushes up a stair to a balcony. And there down below, a river of wailin’, shoulder to shoulder, such a cry risin’ up. No king never got such an outburst of tears.

Then the dirgin’ women mad-stagger along, mixin’ their lamentations into the crowd. The din of it all shakes the walls, but just for a moment it sounded to me like two lutes playin’, melodies entwined, translatin’ the spirit as it leaves this world, its tales of woe and longin’ for joy. Many’s the women leadin’ the mourning. And here comes the coffin, hoisted on high, on the shoulders of the six that are bearin’ the box, it’s draped in fabric, billowin’, black.

Somehow the crowd folds itself back and the coffin passes through. And there he lies, an ancient, white bearded sage of a man, wearin’ his kittel* and a saintly smile. Tiny he is, like a withered bouquet.
* death gown; shroud

“And who can that be?” I murmur to myself, and the man beside me, looks aghast, and sneers at me,
“Are you a worm? What hole do you live in? You even a Jew?”
“A wanderin’ worm, I suppose,” says I. “I just arrived from Muslim Spain with important letters for the Light of the Galut.”
“Well, there’s the Light; a flame gone out, and all the worlds are dimmer now. Your travels are wasted. You can go back home.”

In the next episode, well, sometimes it ain’t so easy to just turn around and go back home.