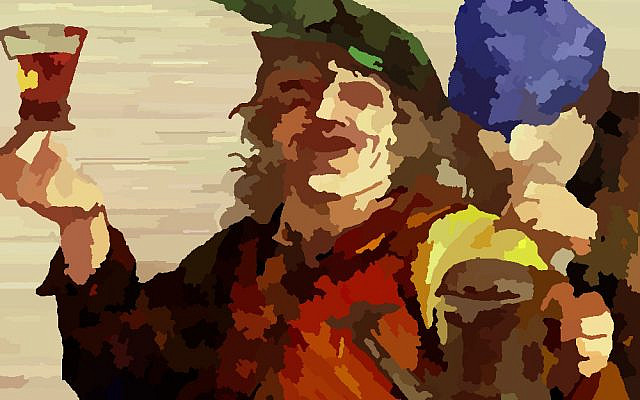 Fritz the drunk, modified and colorized image of a drawing, Drunk, Le Joyeux Buveur by Téniers, from the public domain archive WikiMedia.

In this episode our hero tumbles down a deep hole.

I takes the coin from his trembly hand and goes in the hovelly wine seller shop. Its another Ali Baba cave, musty and laced with spider webs, but the only treasure you can find in that hole be rotten casks of reject wine. In the dank and dark and drear of that place a toothless woman sleeps on a mat curled in the corner; and a foul smellin’ man is sippin’ his wares and jabbers away, entirely unawares I come in. Figurin’ the woman is the likelier one to return to this world, I kicks her leg. With a ‘wuzzah’ and ‘huzzah’ and a hackin cough, in her tohu and vohu I slowly take shape.

I throws down the coin.
“Wine for Fits. The tanners are in need of three or four jugs.”
Well, she knows the script and says her part,
“I cain’t sell no more wine to Fritz.”
So I impervise, “Well, I ain’t him.”
She looks at me and she looks a the coin, shrugs, and offers her best advice,
“Likely enough it won’t go far. Here’s two jugs and tomorrow one more.”
And she pours off some ale in two filthy crocks.

Outside there’s Fruks passed out in the muck.
“Wake up, you slimy bag of warts.”
More ‘wuzzah’ and ‘huzzah’ and ‘oh, that’s me.’

I holds out a crock. Put slop in a trough and the pigs come runnin’ all oink and squeal. Splatter and splash, Fratz crawls to me and grabs the jug with a big muddy grin.
“That’s a good Jew, servin’ his betters.” And me, I tell him to clean his self up:
“There’s shit on your face and shit in your mouth.”
And he laughs a guffaw and takes a long swig.
“That’s me,” he says , “as ever was.”

Stranger to myself, I lift the jug and takes a guzzle, like I’m dyin’ of thirst. Foul it were with its bitter foam. And then another just to prove I can, and another to wash out the acrid taste.

Next thing I knows I’m sittin’ in mud, us two pourin’ out acrid abuse on each other and howlin’ like two mad dogs.

That become my life for a spell. Gutter talk and degraded abuse. Bitter and drunk on bitter drink. And that’s how I learned about Fritz and his way. Us outcast. Carryin’ outsize loads of anger, self pity, and whatever pays. Drunk half the time and sick all the time, with a hackin’ cough and a snot-runnin’ nose. Blistered shoulders and puss-filled wounds. We hate each other, wary and mean, and need each other and ashamed of our need. We, outcast and scorned by Jew and Christian, burgher and serf. And we return that cursin’ and scorn, drivin’ us deeper into our own morass.

Some time later, but the place and time be uncertain — like a rock that falls in a pond, the spray and waves heavin’ out, and then swallowed up and back into itself — whatever waves and spray I made, that memory be all swallowed up and lost. Who knows the effects of what I done and who I hurt.

But this be certain: some time later I remembers a cold and drivin’ rain, rivulets runnin’ through my beard, violent tremblin’ and chokin’ on phlegm as I coughed, thinkin’ death be near.

And then I remembers the face of God with His long white beard and His whirlpool eyes, and I hears Him say (and this be sure),
“Saadia Mishan…
“Saadia Mishan, can you hear now? What is become of Our messenger? Like Avuya, rejecting his high estate, choosing not to tend the vine, he cut it down and dug it out. He turned his face away from the Lor and chose people that have no voice. You choose to pollute your eternal soul in poison drink and poison thoughts. Oh, Saadia Mishan return to our world, the Atzilut* world with truth seeing eyes. Saadia, you lost your way in the dark, Asiyah** forms are deluding you. Now open your eyes and return to the light. Saadia, you must not die but live.”
* Kabbalistic level of conscience closest to God;
** Kabbalistic level of conscience closest to human

I groans a weary disgusted groan. I’m not dead and confrontin’ God; heavenly judgement still awaits. As I lie here lookin’ up, it’s a man, not God, and this is the Metz that we are makin’. I feel so sick.

I cough a thick and gurgly cough, gaspin’ and wheezin’ to suck in air. So cold I am, so cold and so hot. The room swirls as I struggle to breathe, my arms tied down and legs bound. Is this a hospice or a jail’s ward?
“Who are you and what have I done?”
I gasps out, sayin’ loud as I can. He bends to me,
“Speak up, my son.” So I tries again,
“Who are you?”
“Rav Yakar sent me to save your life. I’m his physician and Talmud khaver*, and you’re a spirit on the edge of this world. And I don’t want to let you fall.”
* study partner

I’m wonderin’ what has changed their minds. Yesterday I was a carryin’* man.
* others say ‘carrion’

“A letter from Shmuel has recently come. He wonders if you have safely arrived, and urges us to send our tikkun, swift, with you, and no one else. He says that we must trust only you.”

He said all that but I don’t remember a word; but I heard it from many a mouth after that, with their cluckin’ tongues and their ‘shame on you’s.’

Man-kine we are, our snouts to the ground with nary a thought to lift our eyes, but follow the butt of the cow* in front, and tromp in his shit like it’s sacred ground.
* not to say ‘swine’

I guess that’s how Fritz would say it to you, crude and nasty and tactlessly sharp (if he had the smarts and if he knew how to write).

Perhaps I should say that healer was right, sayin’ I lived on the edge of worlds. But it weren’t just then in that particular state, outcast and drunk and deadly sick, that I’m standin’ on the edge. I’m there all the time. Not an edge that falls off like a cliff, but an edge beyond feeling and touch, beyond easy comforts and accepted thoughts, beyond the proofs and ballyhoo; in those liminal fields, uncertain, unclear, where truth and theory and illusion and lies all mix and merge and come undone. Few the books and few the maps and few the landmarks to guide my way, and few the partners in which to confide. And few who offer encouragement, walkin’ the edge of the human spirit where futures and pasts mix and merge, here, in the dawn, silent and still. In the only place where I can hear the Lor.

In the next episode our hero finds his way out of the deep hole into which he fell.