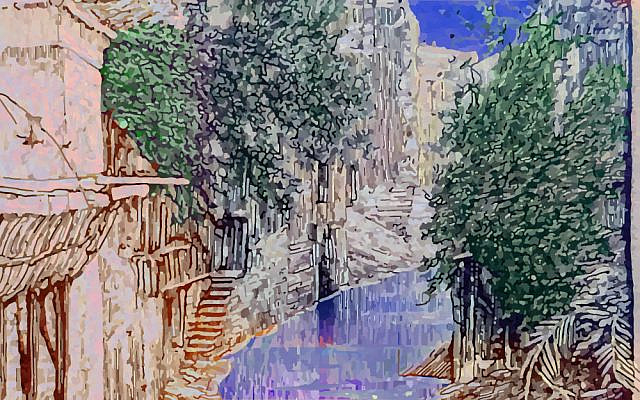 City in Provence, modified and colorized image from the public domain book Picturesque Palestine, published 1884, owned by the author.

In this episode our hero is given an opportunity to change careers.

Girona was a place a Jew could live, with many disciples of the holy and wise. And so we lived there some lifetimes or so.

I won’t tell about Isaac the Blind nor his greatest student, Bonastruc Saporta,* and all the rabbanim and disciples of them, or all their visions and kabbalahs. I remembers Isaac once sayin’ to me:
“Messiah is comin’. The finger of God just now is reachin’ down through the clouds to break these shells that refract the light and warp it and warp us; to straighten us out.”
* Moses ben Nahman

Me, I scoffed at his marvelin’ at the times. The human soul and its layers and veils is slow to change if it can change at all. Such a pile of accoutrements weighin’ us down —

bone and sinew, muscle and vein, organ and blood, skin and scab; five narrow senses; desire and need, feelings and thoughts; and the finer shades of our Adam and his genetic threads; of soul and spirit tyin’ us tight —

all meldin’ and mouldin’, clashin’ and competin’, and bindin’ us in tight bonds of thought and action, sense and response. And where is the sage who knows the signs* to distinguish a moment’s brilliant light from a rearrangin’ of the heavenly spheres?
* others say: science

This I seen: the erratic world turns haughty and cruel, then turns kindly and cool. One day I think we are near redemption; next day I look and just shake my head.

The year is forty-eight-fifty-four, ten-ninety-four as you Romans might think. Muslims will say its four-eighty-six. Down south Valencia is under siege by Rodrigo.* War seems far away here in Girona. Little do I know.
* El Sid

A summer’s day. The sky is bright. The air is hot. The wind, it cools. As shadows stretch, messengers arrive. They find me sippin’ a sagey tea in my favorite shuk on the Jew’s hill.

“Save your tales til we have a meal,”
says I. They follow me to our house.
“Batkol, messengers have arrived from afar. Hurry. Knead them a fine bread, and prepare them a morsel ere they depart.”
“Risen from afar*? Like the poor and the dead,”
says she,
“with a taste for the salt of the earth.”
While she bakes cakes, and sends to slaughter a kid to roast, tender to dip.
* pun on Hebrew; “afar” means “dust”, and she refers to the liturgy that says
the poor and the dead will rise from the dust

Lambs ribs and juicy kebobs, warm pitas, pickles, plums. Fingers still greasy, they bring on the news:
“Your compeer, Shlomo, rabbi of Twa, requests your presence in his academy…”
“Shlomo of ‘Troyez’ you means to say?”
They looks askance and continues their tale.
“Accept a post to teach history. He hopes by Pesach* you can arrive to help with the slaughter, and smell the smoke, and taste the offerings of our exodus.”
* Jewish holiday celebrating the exodus from Egypt

I shivers, and can’t suppress the thoughts of Granada, the smoke and the slaughter there. They seen my face and they makes a note.

Thinks I, once again on the road:
Maybe I should just give it up, and twist my tale into a travelogue. Where are the inns and where are the eats, the prettiest towns and the gentlest thieves. Oh them nights sleepin’ in the open air, the Pyrenees. (Vincent must have slept there, seein’ such stars in the sky as he did.) And the open country and the stony fields and the contours sculpted in winding walls, and your nostrils savorin’ rosemary and pine. Oh, I could go on til five or six sheep had given their skin for parchment sheets, on the ‘scapes and the cakes and the places to see, on the crops so diverse and the breads so sweet, the masons and musics, woodwork and wine, the customs and crafts and churches of Provence, and the way things change as we wend our way north.

Come to Troyes. A winter’s day. The sky is ashes. The air is barbed. Inside classrooms the frigid debate of scholars and rabbis and derelict saints. Outside on the streets expect to meet blacksmiths that know the Torah by heart, and bakers quotin’ obscure tracts, and plenty of peasants and hunnish dragoons.

With the Christian new year I begin my tales, an odd, even heretic topic it be. History! Who ever heard of such a thing to teach, as if it were midrash* and law?
* Midrash: Talmudic interpretations and tales to help understand and fill out terse texts

Rav Shlomo confided how it come to him, to put history into his curriculum:

In the next episode we follow a book of history, the last surviving copy, on its journey across many countries in many hands.