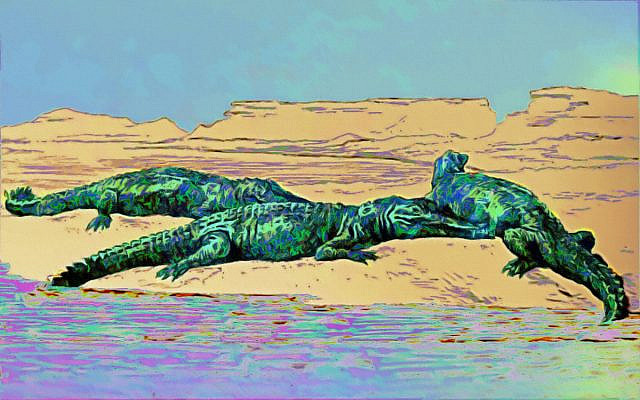 In this episode Ethop goes fishing for Leviathan with his therapist.

…“Do Batkol still know how to bakes them delicious pita stuff with lamb?” And so he returns to our house awhile….

Ethop insists,
“It weren’t me what come as a raven to your door. But some of my friends, high on hashish, had a long giggle talkin’ bout you as you lay on the floor, all whimper and groan. And it seem you almost puked, as well, while that tricksy raven abducted your soul and dragged you out to the open air, divin’ through canyons and swoopin’ on high, to give you a glimpse from a ravens eye.”

“Flyin’ didn’t make me nauseous,” I growled. “That grizzled raven couldn’t fly as fast as the broken basin he sat* upon.”
* others say: shat

Ethop let out a loud guffaw hearin’ my snippy, defensive reply.
“Here’s a thing about ravens, my friend; most of them are just overgrowed crows, jus’ jabber all days and pick dead flesh. But a few of thems been called above to bring down knowledge to the shaman ear through dreams and drugs and staggery fits. And them have brought us many a gift, like healin’ herbs and healin’ arts. So raven like to strut and brag and call himself the shaman bird.”

Ethop came our way once more. Shoot. I can’t remember now; maybe it were after our Messiah days had come and gone and wizened us, but well before Batkol and me finally left Tiveria.

This time he’s actin’ all agitated. Can’t stand still, like a matin’ squirrel. Chitter and chat, gesture and pace; fuss and fiddle of hands and feet, chewin’ seeds and spittin’ husks. Like wet and knotty firewood — pop and fizzle, spark and spray.

“What’s the fire burnin’ in you,”
I asks, tryin’ to friendly up to him, and open a crack for his demons to excape.

“You’re a jabbertalk while I burn, fightin’ battles. It’s all confused… standin’, seekin’, muddy grounds… tearin’ at each other, neck and balls… strength and justice are vicious dogs… and none can prevail; ruin and woe.”

Batkol, who never liked him much takes a surprisin’ interest this time.
“Oh, what a dirty window we are. Who can scrape the muck and mud off the panes to see clear? This particular eruption in you… be there an Eve a-grip of your heart? Or be there a serpent twistin’ your mind with truthy lies or lyin’ truth? Truthy or toothy, it’s bitin’ you. Can you draw me a picture or tell me her name?”

So, in the followin’ days and dreams this the tale that unfolded him.

“Me hearin’ a bat kol* talkin’ in me, a daughtery voice, all breakin’ up, comin’ from the dark earth of me. It thrashin’ and splashin’ like a angry horse, like a king ridin’ a angry horse, like a angry king on a stompin’ horse; a king of marsh and a king of mud, a king that glories in fresh spilled blood. He’s the one a-trample in me. Yes, he’s the one tramplin’ me.”
* literally “a daughter voice,” but usually understood as a divine voice.

“I’m beginning to see your outline of him, a dangerous king in a swampy place. Is it an angry ox from Babylon, up to his knees in Euphrates silt? Or a pharaoh stalkin’ his bloody Nile? Or is this a king of the underworld, tryin’ to ride the waves into light? I imagine a viper in the silty Nile and all the worlds are a-fearin’ him.”

“Yes! Now me sees him steps out of the fogs in the dim twilight of Adam land. A terrible serpent, with claw and fang, big as behemoth and lightning fast. Muck and mud be where him rule, furies and fires erupt from him mouth, warts and welts corruptin’ him back. He turn and see me. Where to runs?”

“A serpent with legs climbs up from the depths of an infernal river, twilight and fog. A terrible lizard it seem to be, rousin’ his hide from the murky past. What is his problem? What is his need? What has changed to wake him up?”

Many the day he ponders this. Many the night of travailin’ dreams, beyond the borders of Adam’s shells where self and other dissolve and emerge; fragments of Aden scrambled in time; future and past mere ruined fields, until he returns with some shards of light.

“After our talks me havin’ doubts: did me really see that terrible beast? Me wade into the waters… stalk and reed, slink and sink in the slimy muds… the black waters, the devoury waters, the water that sucks me down and down; the leechy waters, the insect swarms… the vipery river, the poisonous river… the waters lappin’ in sickly fears… a bird screeches in the steamy air. That’s when me seen him, once and again! A rotten log drifts by my leg… in the channel a glint of tooth and eye… that’s where me seen him once and again! That slimy log, all wart and welt… that glarin’ eye, them jaws of death… carcodile! That tyrant king. Thrash and splash… grind and gnash… that rotten log leaps out at me. King of flesh and king of blood.. king of terrors lurks in mud. He grab my leg and drag me down and in his death-grip sayd to me,
“‘For three grievances and even more… take me to the world of light.’”

Batkol, she takes his hand and says,
“Oh, the lizard has a dream — to be a king of light and peace.”

With that, Ethop with wistful sigh, slowly stands and looks around; stuffs some pitas in his sack and without a word he’s out the door.

Gone a month or maybe more. Was it summer? As I recall the day was hot, the shadows short. He rubs the window behind my bench, scrapin’ the dirt and spider webs. I hears the scrape and then he knocks. I turns and sees his raven* eyes grinnin’ in my window pane.
* others say, ravin’

“Where’s your shaman woman, friend? That carcodile she sic’d on me swallowed me whole, and belly-full, decided to tell me his murky tale.”

In the next episode: a croc who would be king of light and peace? Right.

About the Author
I am a writer, educator, artist, and artisan. My poetry is devoted to composing long narrative poems that explore the clash between the real and the ideal, in the lives of historical figures and people I have known. Some of the titles of my books are: The Song uv Elmallahz Kumming A Pilgimmage tu Jerusalem The Pardaes Dokkumen The Atternen Juez Talen You can listen to podcasts of my Eternal Jew posts on my personal blog, Textures and Shadows, which can be found on my website, or directly, at: http://steveberer.com/work-in-progress. I live with my bashert just outside Washington, DC, and have two remarkable sons, the three of whom light my life.
Related Topics
Related Posts