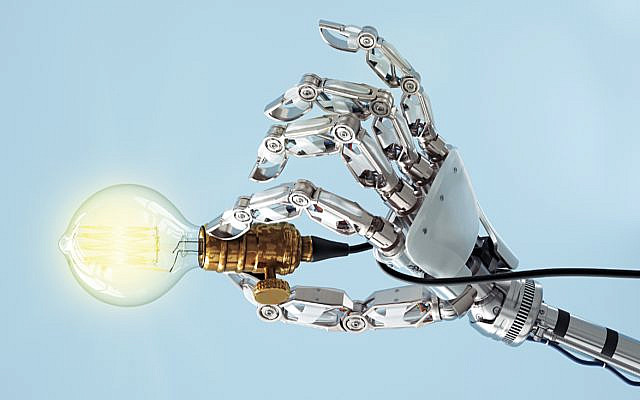 High tech hand with a classic light bulb. How much will AI control its creator?

Artificial Intelligence (AI) is the most important ethical issue of our age. It already impacts on so much of our social interactions and work-life patterns. It’s certain that it will continue to play an ever-increasing role in all our lives.

Last year, Facebook claimed it would be able to predict when we will die, along with other key life events, from marriages to deaths, based on social media activity. As Jews, we should query the benefits and pitfalls of social media platforms and other data harvesting behemoths soon having these capabilities.

It’s encouraging that some leading international data scientists are now keen to engage with philosophers and faith leaders as they start to deal with the ethical issues raised by AI. They know that people involved in faith have had thousands of years of practice discussing issues such as AI, which are hard to define but have a great impact on humanity. Ethical subjects ranging from war to the meaning of humanity and consciousness can be tackled by both religious leaders and scientists in a mutually beneficial relationship.

For instance, London is the city with the second highest level of surveillance in the world, behind Beijing, meaning that every Londoner is caught on CCTV approximately 300 times a day. What would Jewish teachings say about the ethical way to use all the data collected?

The Talmud used the phrase puk chazi, meaning “go look at what is in the marketplace”, to emphasise that listening to what people are thinking, feeling and saying is an important step in writing laws that reflect the nature of society.

Analysing people’s behaviours from social media creates a dilemma – while it’s useful knowing how people react to new information and misinformation, the 280 characters of a tweet can never tell the full story, and may completely skew the truth. If we extrapolate only from social media, at best we lose information and nuance and, at worst, we cause damage that cannot be undone as the online data is available forever.

Further questions arise – if someone posts a photo of themselves smoking when they have claimed to be a non-smoker on their health insurance, should the social media platform share that with the insurer? Would it be right for the person’s premiums to increase as a result?

I recently attended Data Science Africa in Ghana to better understand these issues. Africa is a place where learning about the power of data is used for vital issues such as water supply, climate change, agriculture  and life-threatening illnesses including malaria. Learning about the use of AI in Africa is increasingly pertinent, as demographic shifts mean a significant part of world population growth in the coming decades will come from Africa – within 15 years, one in four will live on the continent. Mustafa, who runs the new Google AI Lab in Ghana explained this by telling me that as a 34-year-old, he is older than 70 per cent of Sub-Saharan Africa.

Learning from Africa is vital as many of the problems already being encountered in regions of Africa will become the whole world’s problems as the climate crisis worsens. The solutions to extreme heat and water scarcity being developed in Ghana can be replicated worldwide.

This might seem remote, but data is already hugely important to our ability to lead a Jewish life in safety in the UK. If a synagogue’s database were hacked by a far-right group, its members could be in severe danger. Our security is now dependent on our cyber security.

We cannot switch off from the issue. We need to learn to understand it, get involved in it and impact on it. Just as we see a role for ourselves as Jews in medicine, law and a vast array of disciplines so, too, should we seek an active role in data science. If it affects us day-to-day, we can’t just delegate it to others.