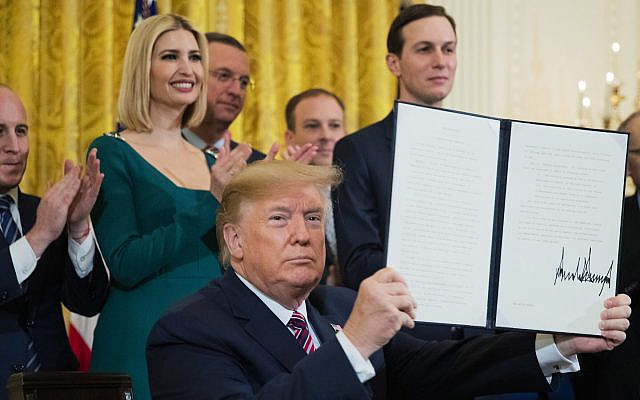 President Donald Trump shows the executive order he signed combating anti-Semitism in the US, during a Hanukkah reception in the East Room of the White House, on December 11, 2019, in Washington. (AP Photo/Manuel Balce Ceneta)

Last Wednesday, in a blaze of publicity and in a cloud of controversy, US President Donald Trump issued an executive order, which he claimed would go a long way toward safeguarding Jewish students on US college campuses from anti-Semitic harassment. The order threatens the cutoff of federal funds from institutions which allow speeches and other activities designed, among other things, to cast aspersions on the State of Israel or its policies.

Jewish organizations split in their reactions. For example, on the right, the Orthodox Union lauded the move. On the left, J Street opposed it.

By and large, the dispute centers on the substance. Does the order protect Jews or stifle academic freedom? The parties have ignored more fundamental questions regarding the president’s authority to issue the order and whether the order fits within the provisions of Title VI.

The president had no authority to issue the order. It requires an Act of Congress. The Orthodox Union wrote in its statement, “Legislation to enact this policy has been supported… for years and sponsored by a broad set of bipartisan leaders… Yet, it has failed to pass Congress.”

The US Supreme Court’s landmark case rejecting as unconstitutional President Harry Truman’s seizure of steel mills, under his war powers, at the height of the Korean War established the modern boundaries between executive and congressional authority. Youngstown Sheet & Tube Co. v. Sawyer, 343 US 579 (1952). Justice Robert Jackson’s concurring opinion, setting out the most expansive view of the majority, listed three circumstances in which the issue arises. 1) A president acting under a law; 2) A president acting when no law exists on the matter; and 3) A president acting incompatibly with the law. The president has the most power in the first instance and the least, if any, in the third.

Here, since members of Congress advocating for the new policy thought they needed to pass a law to achieve that result, the first category does not apply. Not only does no law exist, but Congress failed to pass the proposal the executive order enshrines. Nowadays, rather than reject a bill,Congress does not take it up. In effect, Congress rejected the provisions that found their way into the executive order.

Moreover, the executive order runs counter to the provisions of Title VI.

The mechanics work as follows. Title VI of the Civil Rights Act of 1964, 42 USC §2000d, et seq., prohibits recipients of federal funds or financial assistance from discriminating on the basis of “race, color, or national origin.” In contrast, Title VII of the Act, which prohibits discrimination in employment includes “religion” as well as race, color and national origin. To reach its result, the administration had to classify Jews, not only as members of a religion, but having a distinct “national origin.” Jared Kushner wrote in the New York Times that his father-in-law’s order does not classify Jews as a nation. Yet Mr. Kushner claimed that Title VI applies to Jews. He put forth the following convoluted argument: Title VI applies “to the extent that Jews are discriminated against for ethnic, racial or national characteristics.”

In fact, “national origin” within the meaning of Title VI does not cover Jews. Neither the conservatives’ version of statutory interpretation, nor that of progressives allows for such a reading. Conservatives place sole reliance on the “original intent” of laws. For that, they look to the meaning of the words at the time of the law’s enactment. Not just the dictionary, but prior usage, determines the result. Using that standard, “national origin” means “country of birth.”

For example, in 1924, the US enacted an immigration law which based entry on “national origin” quotas. For over 40 years, including at the time of passage of Title VI, the federal government issued a list. Never did Jews have their own quota. Rather, and tragically during World War II, they fell under the quotas of Poland, Hungary, Russia, or Germany, etc. Even if Jews as a whole constitute a nation in the historical sense, they do not come within the legal term “national origin.” At most, Title VI might apply to Israelis.

Progressives interpret laws based on the entire context and the purpose of the legislation as well. They research legislative history and otherwise divine the goal of the law. In the case of Title VI, the US Department of Justice published a manual of The Synopsis and Legislative Purpose of Title VI. In it, the Department expresses several purposes for the law. First, in support of efforts at racial integration, starting with Franklin D. Roosevelt, the federal government could not finance segregation anymore. Second, the federal government needed a quick and clean remedy — “an efficient alternative to ponderous, time-consuming and uncertain litigation.” Rather than determine motive, courts would look at facts.

In contrast, under the executive order, courts would have to determine the perception of the perpetrator. Jews do not have distinct ethnic, racial of national characteristics. Kushner must refer to perceptions. Did the person think of Jews as a race or nation? That describes the “ponderous, time-consuming uncertain litigation” Title VI seeks to avoid.

Whether one agrees with the substance of the executive order, process matters.