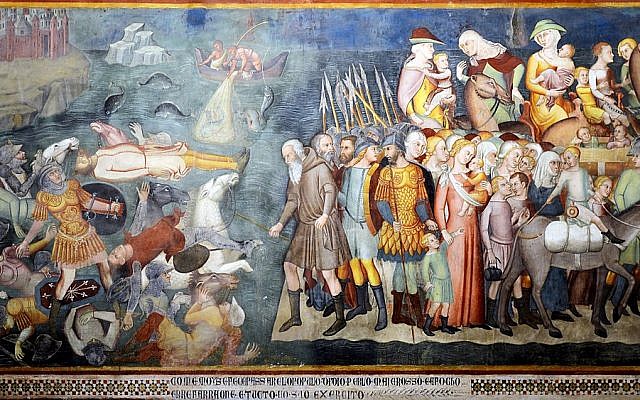 The army of Pharaoh are drowned in the Red Sea in Duomo, by San Gimignano, 1356. (Wikimedia Commons)

Hollywood created the “Let My People Go” idea, but, in reality, all Moses asked for was a three-day furlough to worship God. A statement to that effect is made at least three times in the exodus story. Nowhere is there an indication that he intends for the Israelites not to return. This apparent lie of purpose therefore seems to come from God Himself, forcing one to ask, “Could God not have found a more moral upright way of taking His Chosen People out of Egypt, without resorting to deceptions and untruths?” Does God lack power that He need resort to deceit?

The simplest approach is to suggest that this was not a real lie but one of omission: the Israelites said they were leaving for the three days. They never once said that they were not coming back. If that is what Pharaoh assumes, well, then that’s his problem. Moses says that they would go and sacrifice to God for three days, and leaves out that they would then continue on to freedom, let the Egyptians think whatever they want.

This answer is unsatisfactory; it is still dishonest. Yet many commentators opine that sometimes deception is necessary and therefore justified. Moreover, in this case, would such an attept to deceive be believed? What dictator would allow a whole work force to leave overnight? In addition, God had promised Abraham that the Israelites would leave Egypt with “riches” — which could only happen by means of the Israelites’ “borrowing” gold and silver from their Egyptian neighbors. And who would have given up their wealth had they believed the Israelites were gone for good? Finally, had Pharaoh and his nation known that Moses’ people were leaving for good, they would not have chased them, as they did upon the realization that they had fundamentally moved on. But wasn’t the Egyptian army’s demise at the bottom of the sea part of the goal?

In wartime, the rules for what is moral and immoral are different from those during peace time. That, and the fact that God Himself was at war with the Egyptians justified the deception, and in fact may have rendered it laudatory, in the event that it brought about the end of the war.

Another position maintains that Moses’ request of three days furlough was legitimate — for the sake of allowing religious people to serve their God unimpeded — for a short time. When Pharaoh refused the request,, it became clear to all that he would never agree to any form of freedom. Beyond the message to the Israelites, he conveyed just how obstinate and intransigent he was, an important indication that the “punishment” that befell him was justified.

Perhaps the cover story of going to worship for three days was not for Pharaoh at all, but for the Israelites themselves. What would have happened if Moses had told them pack their bags, because the entire people would be leaving forever — to the desert and then to Canaan where fierce and mighty nations dwell? Isn’t it possible (likely?) that a large group would have turned down the opportunity to escape and prefer to remain in Egypt as slaves, given the relatively “safety” and security in the environment that they knew so well?

Regardless of the motivaation for the deception, our question remains unanswered. Couldn’t God achieve all of the above without resorting to deceit?

Rabbi Joseph B. Soloveitchik, expanding on the Netziv and Rabbenu Bahya, explains that there were actually two plans here. The first plan was to leave for three days and then return to Egypt. The Children of Israel needed to get used to God’s commandments slowly and they needed spiritual rejuvenation. They would have departed, and returnd (no lying), and continued their sojurn in Egypt to fulfill the prophesied 400 years of the time in Egypt, as told to Abraham.

What, asks Rav Soloveitchik, would have happened if Pharaoh would have agreed to Moses’ proposal of a three-day vacation? Throughout the verses it becomes clear that the reason for the plagues was so that Pharaoh and the Egyptian would come to a recognition of God. Plan A was for the most advanced society at the time to begin the process of converting. Had that indeed happened, the world would have transitioned into a time when the whole world would be filled with the knowledge of God, as water fills the ocean. Certainly, God could have taken the Israelites out of slavery without the Egyptians permission, but the goal was not only to free the slaves, but also to change the course of world history.

What, we ask, would have happened had the Arab world accepted the partition plans proposed in the past century? History would certainly be changed from it is today.