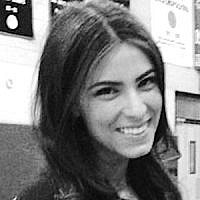 The Blogs
Maya Neiman
Apply for a Blog
Advertisement
Please note that the posts on The Blogs are contributed by third parties. The opinions, facts and any media content in them are presented solely by the authors, and neither The Times of Israel nor its partners assume any responsibility for them. Please contact us in case of abuse. In case of abuse,
Report this post.

Another terrorist attack? Most people would expect the response to a terrorist attack to be remorse, sadness, and heartbreaks – all the negatives and handwringing. You name it. However, MY family – my Jewish family? We’re different.

I’m blessed to be studying in Midreshet Harova, a girl’s seminary in the Jewish Quarter of Jerusalem, a five-minute walk from the November 24th stabbing at the Jaffa Gate. I’m ensconced in an atmosphere of self-reflection and determination to better myself. There is simply nothing like it. However, when these sadistic terrorists carry out an attack, and my friends in the States text me, “are you okay, is it crazy by you,” I’m perturbed. It’s very easy for all the positives I’m learning in seminary to slip away. I respond to my friends, “things are calm by me.” This is actually true because everyone is so used to these terrorist attacks.

Does the world not realize what a sick reality it is that human beings are USED to hearing about stabbings and cold-blooded murder on a weekly basis?

Although we hear about it on a weekly basis, we don’t get desensitized. The immense pain does not lessen, regardless of how often these attacks occur. On Tuesday, the 18th, upon hearing about the sickening news of the terrorist attack carried out in Har Nof and after a long day of learning, I went to the Kotel (the Western Wall). I sat there reading psalms, and suddenly, I hear singing. I finished the chapter I was on and started to listen carefully. It was the girls from my school all sitting together, united as they sang their hearts out. In To get to the Kotel from the Jewish Quarter, you have to walk down what feels like a million steps. The girls from my school were sitting at the top of those stairs. And I heard them all the way down at the Kotel!

It was then, when I heard the united in-sync voices come together, by their own will, at such a late hour, singing and feeling united as a nation, that I realized how powerful we really are. We’ve really been through hell and back – slavery in Egypt, the Roman and Greek persecutions, the Crusades, the Inquisition, the Holocaust and now this tragic era.

But why would we look so negatively, when there is so much positivity emanating from it. Find me one other nation in the history of the world that was here from the start, that went through as much as we did, and walked out of every tragedy with our heads up ready to live tomorrow because that’s what we do – we LIVE. The enemy we face today lives and breathes death. They’ll commit suicide and call themselves martyrs- as long as it means the extermination of “infidels”. They value death as much as the Jewish people value life. They teach heir children to be “martyrs” from young ages. They teach them to die for their religion. They infuse their children with the thought that they will be loved if they carry a bomb instead of books in their school bags. WE teach our children, from a young age, to LIVE for our religion. We educate our children in Torah studies, how to be exemplary human beings, how to be good children, good Jews. Jewish children are taught about introspection and that to use every good tool and every experience in this world to better themselves… While the education that the terrorists are teaching their children is simply how to make a bomb and how to figure the right time to pull out the knife and start stabbing…

November 18th, when four Rabbis were killed merely for being Jewish and one Druze police officer murdered while trying to protect helpless vulnerable civilians, the eyes of many were opened. This dispute is no longer, nor has it even been, about the land. Har Nof, the place in which the attack took place, isn’t a place that has been disputed. This is pure anti-Semitism. These men had wives and children. “Daddy goes to shul (synagogue) to pray, he comes home to make sure he sees me before we start our days and we continue our days from there,” is how the average Jewish child would explain the beginning of his or her father’s day. However, this time, these children’s daddies didn’t return from shul to wish them a good day and tell them how much they love them. They were murdered in cold blood instead. And now these children will never see their fathers again. The family of these five men will never be able to experience their fathers’ love just once more. As I walk through the Rova and see fathers holding their children’s hands ever so tightly, I can’t help but choke up because these fathers who were murdered will never be able to hold their children’s hands again. They will never watch their children grow up into beautiful, successful and happy young adults. Nor will the children ever be able to feel their father’s love as he hugs them good night, giving them that warm feeling of love and safety.

Immediately after hearing about the Har Nof attack early in the morning, I received a text from my school saying we’d be having a mandatory meeting. My Rosh Midrasha (principal), Rabbi Milston, announced the usual – a lockdown. However, he didn’t end there. He said the following:

In that week’s Torah portion, Isaac, our forefather, took it upon himself to re-dig the wells that the Philistines had filled up. However, upon his finishing, the Philistines cruelly went back to the wells to plug them up once more. So, what did Isaac do? He went right back and began to dig again. Again, the Philistines plugged up the wells. Did that discourage Isaac? Absolutely not! He re-dug the wells AGAIN! This time, the Philistines stopped. We can be attacked again and again, but are we going to stop fighting? We’ve been through hell and back. But just like Isaac was finally successful, which ushered in the continuation of the Jewish legacy started by his father Avraham – WE walked out of every tragedy and continued the legacy of the Jewish people as well.

No matter what happens, we have to continue fighting. We have to stand strong and NEVER give up. Because we MUST be able to look into the face of every innocent holy soul that has been brutally murdered in cold blood and taken away from us when this is all over. So when the terrorists ARE defeated and when we are reunited with our loved ones we can say, “We NEVER gave up because we knew it was our obligation to stand up for what’s right. We fought for your legacies to live on because, unfortunately, you did not have the opportunity to pass it on yourselves.” We have tried peace talk after peace talk, but every peace treaty went down in flames because they can’t help themselves from murdering and then throwing a party celebrating death. We sat at the negotiating table and dreamed we’d finally have peace. We though we’d finally live safely and happily in our home with the other side happy as well. We were wrong every time. This is OUR land. This Holy Land belongs to a people living by a moral code. This is OUR people. When it comes to family, we NEVER give up. These precious innocent victims can no longer stand up for what’s right. They can no longer influence the people in their lives because people with a background of immorality murdered them.

So lift your heads up and stand with Israel. Show all the terror victims of Israel who lost friends, cousins, aunts, uncles, grandparents, mothers, fathers, sisters, brothers, daughters and sons that we stand for what’s right, because it is now our obligation to show them the way. Show them that their family members were not killed in vain. Show them that we have a sense of strength that will, with G-d’s help, that will create a good life in this land and will bring the final redemption! It is our RESPONSIBILITY to stand strong, to live as moral people and carry on the legacies of our forefathers and our recently lost fathers.

This is a fight of morality against immorality. You don’t have to be Jewish to fight for these values. We CANNOT and WILL NOT let immorality infiltrate our beautiful world.

So, how are YOU going to fight the immorality?

About the Author
Maya Neiman is currently a student at Midreshet Harova (girls seminary in The Old City). She plans on living in Israel and, next year, will start her sheirut leumi service. and will then attend Bar Ilan University.
Related Topics
Related Posts
Comments