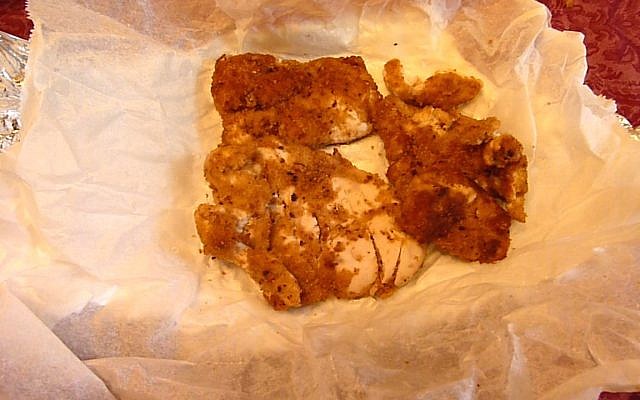 Yesterday I made my first chicken schnitzel.  I went out and bought 1.6 kilo of schnitzel meat, without antibiotics.  I paid 30 shekels; it was enough for at least 4-6 portions.  I thought to myself, “a schnitzel dinner at the local steakiya would cost me at least 70-80 shekels (if I were lucky)”.  I was so grateful for this realization.

I bought some whole wheat bread crumbs, beat up my eggs, and went to work.

The problem with cooking schnitzel is that after the first batch, after each morsel is perfectly cooked, the others start to look weird.  The old frying stuff starts to stick to the new one, and something starts to happen:  The second batch schnitzels start looking like leopards.  The spots are like the memories of their colleagues who already underwent cooking.  The past meets the present.  Hardly something you want to eat (but in the end they tasted fine).

The third batch can be a real problem.  You add more bread crumbs but the oil is old and tired, and the meat comes out almost all white, with the crumb coating falling off.

So I discover: even in schnitzel making, there is an aspect of old age.  Of course the third batch tastes fine, and it is even healthier because it has less bread to digest. However this is only evident in schnitzel-land.  In true old age, the systems start to break down, and we become like the saucer man in the circus.  He spins one plate on a pole.  It spins with incredible ease and grandeur.  Then he goes to the second. Then the third.  Of course by the time he gets to the fourth, the first is wobbling, and he has to scoot back and get IT going.  Well  this continues, on and on.  The man’s energies are spent running back and forth to “energize’ each wobbling plate, so he eventually looks like a chicken running with its head cut off.

Yes, this is a strange analogy for the golden age!  But it has some truth to it.  I recently did a survey of my own systems from head to toe, and the data was, between you and me, disgusting (I won’t go into the gory details).  I will say this: that at this point in time, there are seven of my discreet systems wobbling (some more than others).  There is something strangely comic about this.  The sad point is that no matter how many schnitzels I eat (whether they come from batch one, two or three), the wobbling persists.

I dream of doing something radical.  I have heard that the Thai government will give you an island of your own if you promise just to take care of it.  For free!!! No strings attached.  If you are a foreigner, you need a Thai partner.  Now, I have a dear friend, Dr. Niwat, who is a famous Thai architect who works in the ancient Lanna style.  I once posed this island fantasy to him, and he was happy to oblige.  So now that I have the island, what will I do with it?  Who will I bring? My wife (of course)! My children (they can visit).  But what will I do?  What will I eat?  Of course fish, plenty of fish. There will be birds of all sorts, no doubt, but chickens?  No way! Then, how will I eat my schnitzels?  Without my schnitzels how will I survive? 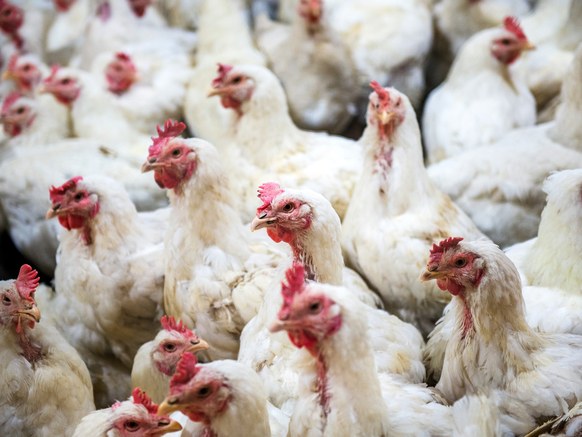 Ok, but lets establish the fact that I CAN try living on the island without schnitzels, living on fish and veggies.  Not so bad.  What will I do, look at the ocean’s ebb and flow all day?

Actually I did this kind of ebb looking at one point in my life.  By my parents house in Marblehead, Massachusetts, there was a beach, mostly isolated in fall and winter.  I would go there, especially when the tide receded, because then you could climb up on the rocks.  It was so amazing: peaceful and stimulating at the same time. The sound of the churning waters touched all the internal parts of me.  I used to love sitting on top of those rocks.  But one day, I was troubled by something (probably the anticipated Vietnam War draft).  I was in no mood for a Hare Krishna mantra or any kind of meditation for that matter.  After ten minutes of sitting, I was itching to go.  I paused. I said to myself: “Steve, if you can’t sit here for five hours, you will never be happy; you will never be at peace with yourself”.  And so I did.  After five hours I felt refreshed, even elated.  The waters had started to rise, so I made my way back home.

When I returned, there was my mother. Dinner was ready. And what was dinner? You guessed it.  The most delectable chicken schnitzel I had ever tasted. But of course after five hours of meditation, any schnitzel would have tasted great. I never forgot that schnitzel.  My mother really knew how to make it.  All of her batches were number ones.

Lately, I am minus ocean. My latest meditations are done with kundalinis and chakras, or Joe Tracey’s hypnotic voice leading me to my spirit partner, or some such thing.  That is because there is no ocean in Jerusalem.  I do miss it terribly.  No matter.  The city is filled with other wonders, like Isamu Noguchi’s fountain, when the museum can afford the water to operate it.  The fountain is at the entrance of Noguchi’s entire sculpted landscape masterpiece: the Billy Rose Garden, which he imagined as an “Acropolis for the Middle East”.  Yes, we have our inspiring waves here for sure.  I once had the pleasure sitting with Isamu for several hours but that’s another story for another day.

Meanwhile, I will retreat to my composing (please forgive me).  I am currently writing a piece called “Circus”; it’s autobiographical, though I imagine many others could write about their own circuses, complete with wobbling saucers and wobbling body systems.  Hey, why don’t we celebrate them together?  Whether the golden age, silver age, or millennial age, they all matter.  After all, probably most of us have at one time or another loved schnitzels (the universal food of thought and wonder) but those who cooked them, ah, they are the lucky ones!

Music Bonus:  Seven Faces of a Garden, S. Horenstein, a sound environment for Isamu Noguchi’s sculpture garden, performed live with forty dancers working in seven groups throughout the garden. The piece was like a mobile by Alexander Calder, with the music sounding different from the various garden locations. Each separate sound “station” was also built around a sculpture. Participants: Rena Schonfeld, Kibbutz Dance Company, Bat Sheva, Pax, and others. Performed, June, 1981, Israel Museum, Jerusalem.  ASCAP/ACUM. All rights reserved. (click the blue link above to hear; the music starts softly, a few seconds in)