The Blogs
Dmitri Shufutinsky
Apply for a Blog
Please note that the posts on The Blogs are contributed by third parties. The opinions, facts and any media content in them are presented solely by the authors, and neither The Times of Israel nor its partners assume any responsibility for them. Please contact us in case of abuse. In case of abuse,
Report this post.

The Forward is a self-branded liberal Jewish magazine–one that I myself have contributed to. However, it is a magazine that is increasingly out of touch with Zionism and the pro-Israel advocacy movement. While there are occasionally articles in the magazine that are staunchly Zionist and refuse to give in to the “soft bigotry of low expectations” regarding the Arab World, too many recent articles have a bone to pick with Israel’s existence as a Jewish state; the aboriginal status of the Jews to the Land of Israel; or Jerusalem’s right to self-defense against Palestinian terrorism.

Before I begin this piece, I will acknowledge that there are quite a good amount of writers on The Forward. Many of them contribute fair articles and are great advocates for progressive causes, Jewish safety, and Israel’s right to exist. Others post interesting or entertaining articles having nothing to do with politics. Some will claim that my article now is some sort of vendetta for having only one piece published in the magazine. Yet if that was the case, why would I have waited until now to write such a piece? Moreover, I have written for many publications, and will continue to do so in a professional manner–there is no reason for me to fear that my voice won’t be heard, or my contributions not made. 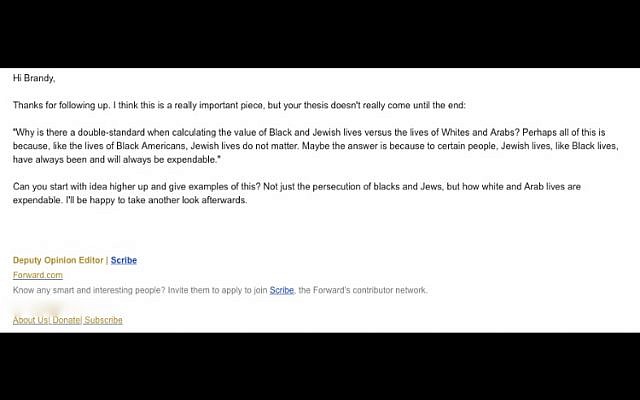 I submitted an article to “Scribe”–the contribution section of The Forward–over a year ago, regarding past-and-potentially-future relations between Iran and Israel. I was dismayed that, without my permission, the title of my piece was changed in such a way that made it look as if I advocate for a relationship between the Jewish state and the current Islamic Republic regime, which threatens Israel’s existence. Multiple times in my article, I pointed out that Israel cannot have good relations with Tehran at this time due to its human rights abuses and support for terrorism, yet the image Scribe’s staff chose to represent my piece was that of the ayatollah. Despite this shock, I moved forward and submitted a number of drafts of articles having to do with foreign policy or Israeli politics, some of which were quite critical of the Likud government. All were turned down for being “too long” or “not something we’re interested in.” I also began to take notice of Scribe having a certain agenda when it came to which articles were chosen to be published–whether about Diaspora life, food, the anti-Trump protests in the US, questions over Jewish ethnic/racial identity, and so on. Still, I recommended that my mom–a Black and indigenous Jewish activist and doctoral student–apply to write for Scribe. Ultimately, she did, and her piece was well-received and widely shared throughout social media.

Recently, she began work on her second piece, aiming to tackle how many throughout the world view Jewish and Black lives as worthless and expendable. Examples include how African-American victims of police brutality are often themselves judged more harshly than the perpetrator, or the double standards Israel faces in the United Nations when it defends itself from terror. Disturbingly, the response (see above image) to her draft submission was anything but what one would expect from a self-styled progressive publication.

Often, pro-Palestinian advocates criticize Zionists for employing “whataboutism” when we criticize the human rights abuses of the Palestinians or others in the region instead of solely focusing on “the occupation.” The “All Lives Matter” movement–if one can call it a movement–employs this “whataboutism” on a regular basis. When an activist from the Movement for Black Lives (BLM), or progressives in general, discuss police brutality or shout “Black Lives Matter,” the response from uncomfortable and privileged White people (or self-hating oppressed groups) is typically “All Lives Matter.” This is the result of two things: racism, aiming to whitewash and erase the systemic oppression people of color face in the US; and an unwillingness to address the issue of racism by looking the other way and portraying the oppressor as a victim. Unfortunately, the Deputy Opinion Editor at Scribe did just that. Apparently it is not enough that my mom–like the rest of my multi-ethnic family–has to worry about systemic racism in these troubling times in America: she cannot even write a piece critical of the minimizing of anti-Semitism and anti-Black racism in society without being told that the majority groups responsible for much of this oppression–Arabs in the Middle East and Europeans in the West–are “equally expendable.” In other words: “All Lives Matter.”

For quite a few months now, I have suspected that The Forward–a once venerable and progressive publication–has left behind true liberal values in favor of virtue-signaling and adopting a “Western Savior Complex.” I’d been warned, when my article was being accepted, that I would be “dealing with an ignorant self-hating lot.” It seems that The Forward is a small example of what is happening to the Jewish Diaspora Left, and left-wing politics in general. Rather than maintaining criticism of Likud while also vociferously condemning Palestinian extremism and intransigence, The Forward too often embraces anti-Zionism and acts as if Israel is the only party at fault for the lack of Palestinian independence. While condemning right-wing anti-Semitism, The Forward usually ignores it from the far-left–and criticizes Jews who point this out. The Forward generally tries to maintain a false identity of Judaism based on “Whiteness” in order to present Jews as a privileged group that must “save” (and refrain from criticizing) the oppressed, such as Palestinians. And as this email above shows, those who have adopted these views try to fit into the privileged mindset by adopting the narrative of “All Lives Matter.” If that isn’t antithetical to the “Jewish values” many of Scribe’s writers claim to believe in, I don’t know what is.

About the Author
Dmitri Shufutinsky is a graduate of Arcadia University's Masters program in International Peace & Conflict Resolution. He is an ardent Zionist and a supporter of indigenous rights, autonomy, solidarity, and sovereignty. Dmitri currently lives in Kibbutz Erez, Israel as a Lone Soldier in the Garin Tzabar program, and is in the Givati Brigade.
Related Topics
Related Posts
Comments