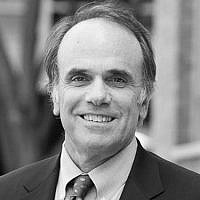 The Blogs
Michael Feuer
Educator and policy analyst
Apply for a Blog
Please note that the posts on The Blogs are contributed by third parties. The opinions, facts and any media content in them are presented solely by the authors, and neither The Times of Israel nor its partners assume any responsibility for them. Please contact us in case of abuse. In case of abuse,
Report this post. 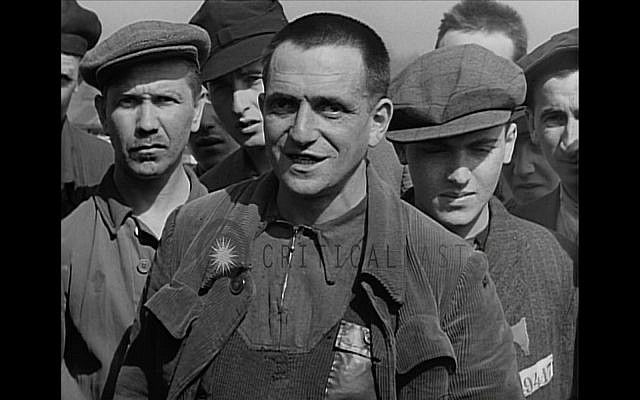 The author's father, German Jewish internee Otto Feuer of Buchenwald Concentration Camp, is interviewed following the camp's liberation by the US army in April 1945. (Screenshot)

When I was a boy in Queens, my family subscribed to a newspaper that was delivered daily to our front steps by a kid on a bike with a big basket. The Long Island Press was a welcome supplement to that other paper we read, the New York Times, which modestly claimed to contain “all the news fit to print.” The Press once ran a contest inviting readers to enter seven digits into the circles of a rotary dial phone, mail it in, and take their chance to win a prize: maybe a lifetime subscription to the Press, or a new rotary dial phone. I still remember my father’s entry: he wrote, in his best European penmanship, 4-1-1-1-9-4-5.

As he sealed the envelope, I detected a mischievous smile. “Dad,” I asked,
“isn’t 4-1-1 the number for information? I would have put my birthday.”

“Funny you mention that,” he answered. “I did enter my birthday. Sort of.”

What? I knew he was born on November 2 (which he often proudly reminded us was the date of the Balfour Declaration). He explained: April 11, 1945 was the date of his second birth. For on that day American troops came to liberate Buchenwald, where Otto Feuer had been an inmate for four years (after two in Sachsenhausen and Dachau).

On this Yom HaShoah I am again “confronting the Holocaust.” But to be honest, I have never really confronted the Holocaust itself. I saw pictures, went to movies and plays, read scholarly histories, heard personal stories — but did not confront the real thing.

Born in New York, seven years after the camps were liberated, I didn’t witness crematoria, quarries, or teenagers trampled by SS jackboots. So the meaning of “confront” is complicated, and I’ve learned over the years that blurring distinctions between personal experience, others’ memories, and recorded history, though tempting, is untruthful and ultimately unsatisfying.

There is a broader lesson here, about the hazards of simplification on a topic such as the Shoah. Perhaps because what happened under Nazi rule is so utterly complex, so evil, so impossible to “explain” adequately, it prompts us to look for answers that seem more rational, reassurances that amid the chaos we might maintain personal control. Primo Levi, among the greatest of Shoah chroniclers, recounted, in “The Drowned and the Saved,” the story of a fifth-grader who, hearing details of Levi’s camp experience, devised an escape route “if it should happen to you again…” The child sought anticipatory relief, and in pointing a way out for Levi was actually showing himself how he could outsmart the SS. Levi understood and sympathized, but saw it as emblematic of the dangerous “slide toward simplification and stereotype,” a pattern he wrote eloquently about.

Looking for logic is a natural way to cope with complexity. But it is a salve with bad side effects. Consider Bruno Bettelheim, a psychoanalyst for whom a few months in concentration camp were enough to theorize that experiences in the lager led to engrained moodiness and depression among survivors. Though intuitively appealing – how could deprivation, torture, starvation, and constant fear of death not affect one’s personality? – it was junk science.

Making broad claims based on clinical and unrepresentative samples is methodologically flawed, leads to spurious inferences, and can be terribly hurtful. Stresses of everyday life affect survivors and non-survivors and, if anything, most survivors obviously had developed remarkable coping skills. (They would have gladly been spared the training program.) Having courageously rebuilt their lives, shouldn’t survivors be spared offensive suggestions that they are chronically unfit? Some needed help with housing, employment, and education; others, like Otto, had significant health problems caused by the torture and disease they endured in the camps. But alleging with the skimpiest of scientific evidence that they were psychologically damaged goods was both intensely irritating and emotionally damaging. The most eloquent rebuttal of Bettelheim was “The Survivor: Anatomy of Life in the Death Camps,” by Terence DesPres (a non-Jew and non-scientist).

From survivor-syndrome, it didn’t take long for the sequel to appear, more half-baked baloney this time targeted at the “second generation.” It seemed to make sense: kids raised by survivor parents who were maladaptive must be prone to various psychological and social ills. I admit it was tempting to blame Hitler for my mischief-making in grade school, my awkwardness with girls in high school, my devotion and attachment to my family, my on-again-off-again religious observance, and my dissertation anxieties in graduate school.

The trouble is that my friends who had the same problems couldn’t use my excuse. An Italian Catholic psychiatrist made me confront that inconvenient truth. What I thought was my meshugaas, uniquely caused by my parents’ suffering, sounded to him like problems he had growing up in South Philadelphia. Does that mean that what my family went through wasn’t special? Or that I didn’t have my issues? Certainly not. But simplistic conclusions — in this case about how and where personality and behavior are shaped — don’t honor the memory of the survivors (or their children).

Some blurring of facts is politically motivated. Consider the sadly commonplace error that 11 million people were victims of the Shoah. I am grateful to my friend and colleague, Walter Reich, for reminding me of this distortion. Where did the additional 5 million come from? It seems that an aide to President Jimmy Carter urged him to use the larger number, in the executive order establishing the US Holocaust Memorial Council, so as to include non-Jewish victims and thereby generate more public support. (If I were a non-Jew, I would be insulted by the suggestion that six million Jewish dead are not enough to evoke my sympathy.) The inflated number originated with Simon Wiesenthal, who wanted to evoke non-Jewish compassion; he later admitted to having made up the number out of thin air.

But wait: about 40 million civilians died in World War II. So maybe 11 million is not inflated after all? Death is universal — whether one dies in the line of duty or in a bombing raid or in a gas chamber doesn’t change the outcome (to the best of our knowledge). But the cause of death does make a difference. Primo Levi quoted Norberto Bobbio: the Nazi camps were “not one of the events, but the monstrous, perhaps unrepeatable event of human history.” And as Ha’aretz, one of Israel’s papers of record, put it, “the murder of the Jews of Europe is in a class by itself … because of the ideology behind it, which placed the elimination of an entire people and their culture from the earth as one of its primary goals. It was unique because Nazi propaganda focused so intently on the Jews as an almost supernatural cause of evil, and the German war machine remained devoted to killing Jews up to the very last day of the war, long after it was clear that the war was lost.” Again, blurring complexities – in this case lumping together deaths that occur for different reasons and under different conditions – damages the historical record and feeds the fantasies of Holocaust deniers.

If some efforts to “confront the Holocaust” lead to errors of commission, others are compromised by errors of omission. Laurel Leff showed in her book, “Buried by the Times,” that the great American paper of record had trouble recording some relevant data: it “consistently placed major stories about the Nazi treatment of European Jews on back pages… and the story of the Holocaust… made the … front page just 26 times [in 12 years], and only in six of those stories were Jews identified… as the primary victims.” Would more Jews have been saved if the editors had thought news of the Shoah was fit to print? Would the US have bombed the tracks to Auschwitz? We will never know.

Maybe the Times was burdened with political or psychological baggage. Not so the brave men and women who answered the call, put on their uniforms, laced up their boots, packed their bags, and went to war. Many of them confronted remnants of the Shoah, and what they saw has surely remained etched in their memory. If you go to Germany, stop off in Weimar, a picturesque town that was home to Goethe and Schiller, a favored center for Franz Liszt, the place where Bauhaus began. Take the #6 bus, marked “Buchenwald,” and in 20 minutes you’ll be up the hill. Iron lettering above the main gate clarifies that “work liberates.” Go to the building that has been converted into a small museum, and watch newsreel footage taken by the US army. There you’ll meet Otto Feuer, in April 1945, as he thanks the American people for coming to free him and others.

Not in Israel now, I must listen for my own siren on Yom HaShoah. I give thanks that Otto, ז׳׳ל, had that second birthday and raised a family for whom the Holocaust is, indeed, history.

About the Author
Michael Feuer is Dean and Professor of Education Policy at the George Washington University, past co-chair of the Collaborative for Applied Studies in Jewish Education, Chair of the Advisory Group on Evaluation and Strategy of the Jewish Agency, immediate past-president of the National Academy of Education, and nonresident senior fellow at the Brookings Institution. This essay is based on a speech he gave at the US Army National Guard Readiness Center, on Holocaust Remembrance Day, 2014)
Related Topics
Related Posts
Comments