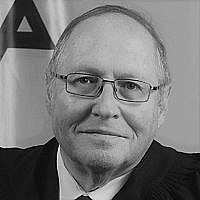 The Blogs
Elyakim Rubinstein
Apply for a Blog
Advertisement
Please note that the posts on The Blogs are contributed by third parties. The opinions, facts and any media content in them are presented solely by the authors, and neither The Times of Israel nor its partners assume any responsibility for them. Please contact us in case of abuse. In case of abuse,
Report this post.

Seventy-five years ago, on August 14, 1942, my father’s family — his parents, two sisters, brother-in-law and baby nephew, together with all their relatives and the Jewish community of their shtetl (little town) in Belarus — were all shot into a mass grave by the Nazis and their local collaborators. The victims of the Holocaust — six million of them, a third of the Jewish people — left us with the command that perpetrators of heinous crimes, anywhere, should be brought to justice. Prominent Jewish and Israeli jurists carried this torch. Raphael Lemkin, a Jewish refugee from Poland initiated the Genocide Convention. Dr. Jacob Robinson, a Jewish refugee from Lithuania, was an adviser in the Nuremberg trial and later in the Eichmann trial in Jerusalem. Shabtai Rosenne, a renowned Israeli jurist, significantly contributed to various branches of international law. My generation feels the obligation to continue in their spirit.

Today, the international community marks International Criminal Justice Day, which originally stemmed from the adoption of the International Criminal Court Rome Statute, in 1998. As attorney general of Israel, I headed our delegation to the formation of the statute. In my remarks at the Rome Conference on July 17, 1998, I warned, inter alia, against the dangers of politicization of the Court processes. Israel actively participated in all stages of the negotiations leading to the Rome Statute. But later, I took part in the agonizing deliberations that took place in our government regarding the statute. Due to the above concerns, we were unable to join the Court. But our decision — not an easy one at all — does not for a moment diminish our deep commitment to the ideas of international criminal justice, which are embedded in our national values and in our long-time practice. That is why our country was an early supporter both of international treaties concerning humanitarian law and of constant prosecution of perpetrators of crimes against humanity and war crimes.

The Kapo Trials in Israel during the fifties, and in particular the Eichmann trial in the early sixties and the Demjanjuk trial in the late eighties, attest to that. Having followed a part of the Nazi crimes investigations in Israel, I can personally testify to the seriousness and devotion of our teams.

As we reflect today on international criminal justice, we can look back with satisfaction on the positive developments in this field during the last 70 years — from international human rights and humanitarian law treaties to the actual prosecution of criminals in international and domestic tribunals. That is the good news. But there is other news, very sad news. Mass atrocities have taken place in various countries. In our neighboring country, Syria, for example, hundreds of thousands of people have been slaughtered, mostly by their own government. One day, I hope, those responsible will be brought to justice.

In order to succeed, international criminal proceedings should, on one side, be vigorously pursued. On the other hand, the process must be protected from politicization and abuse. Indeed, the main responsibility to prosecute perpetrators of international crimes lies with their own countries, but where that is impossible, the role of international tribunals intervenes. These should be therefore encouraged, although a realistic approach would admit that they cannot serve as a tool in all cases and everywhere, due to many obstacles.

Let us reflect today, marking International Criminal Justice Day, on the world’s progress in fighting against barbarism — such as the ISIS practices — and atrocities. History shows that technological developments, which may bring blessing and prosperity, may also become weapons in evil hands. The sacred values of the rule of law call upon us to protect and apply the law against perpetrators of actual crimes against humanity and war crimes, and to stand up to the abundant challenges of our days in this respect.