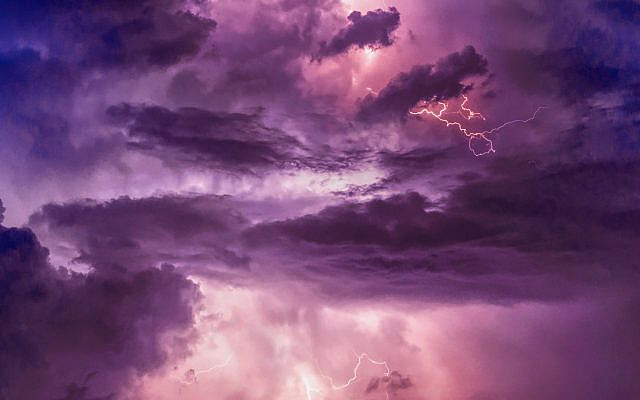 In early April, Iran celebrated its 15th annual “National Nuclear Technology Day” and used the occasion to demonstrate new IR-9 centrifuges. These new centrifuges are 50 times more efficient enriching uranium than the previous model. This achievement is a thumb-in-the-eye to America proving Iran’s “peaceful nuclear program” is anything but…and that they will continue their deceptive march to become a nuclear power.

Consider how the confluence of three developments forms a “perfect storm” endangering Israel, the United States and world peace.

First, how can it be that America is now an impotent paper tiger in spite of fielding a world class military, controlling powerful financial networks and being the dominant world economic force? The answer to this absurdity has to lie with President Biden’s early messaging to Iran. He appears willing to forego leverage of crippling sanctions, to subtly undermine support for Sunni nations and to re-enter the flawed 2015 JCPOA.

Joe Biden has chosen senior leaders who have demonstrated anti-Israel bias. In addition to the JCPOA facilitators like John Kerry, Wendy Sherman and Tony Blinken, consider the damage done by selection of Rob Malley, Maher Bitar, Kristen Clarke and Matt Duss. What does this tell Iran?

Biden’s first three months in office have witnessed Georgia voting law “outrage” earning from the Washington Post four Pinocchios, a border “crisis” coverup, the sleight-of-hand Covid Relief Bill targeted expenditures, an Infrastructure Bill with its loosey-goosey definitions, and whitewashing strung-out Hunter’s mischief. While all this hypocrisy should horrify Americans, it also conveys to our enemies a willful, foolish disrespect for the truth…and it undermines Biden’s credibility among sovereign leaders.

“False words are not only evil in themselves, but they infect the soul with evil,” warned Plato.

From the warp-speed Covid vaccine development to border security to the progress in the Middle East, Biden has petulantly pursued an anti-Trump doctrine. He wants to erase the very real progress made by his predecessor. Joe Biden’s missing-in-action presidency highlighted with a bunkered public schedule and opaque, teleprompter “transparency” telegraphs to our adversaries that either others are in charge or that he lacks the energy to lead our country.

Second, Iran has to feel empowered. While there is a proxy-cold war fought with Israel…witness the attacks in Syria, Natanz sabotage, and against shipping vessels…their $400 billion trade deal with China and outreach by the EU have to inspire Iranian resolve. Biden’s prolific use of Executive Orders suggests a strategy to short circuit legislative processes, including Congressional approval.

Secretary of Defense Austin recently pledged America’s commitment to Israel’s security. Great, but we all recall President Obama’s breathless pledge to “…have Israel back” and we witnessed his UN Resolution 2334 treachery.

Recent reports from the International Atomic Energy Agency (IAEA) detailing new Iranian nuclear breaches and the Mossad’s 2018 lift of half a ton of archived documents from a Teheran warehouse substantiated the reality of their decades’ long pursuit of a nuclear weapon. To treat the Iranians and their negotiators as anything but untrustworthy adversaries is a fool’s mission. Iran is a determined foe bent on another Holocaust.

Third, will the broader Jewish community pressure the Biden Administration to support Israel against the Iranian menace? The highly partisan, spiteful never-Trump obsession of the Jewish voting public is backstopped with compliant politicized “Jewish” organizations. The tilt of major American Jewish organizations like ADL, HIAS, National Council of Jewish Women and even the JCPA away from their roots is a crystal-clear signal something is VERY wrong.

It would seem our Jewish leadership has forgotten our vulnerability, and hyper partisanship distracts them from lessons of the past. The infection of false words has proven fatal for the Jews, and these organizations now cave to “feelings” of the woke-cancel-intersectional narratives that convert Israel into the aggressor, colonialist and racist. The hard work to teach, understand and advocate for the truthful “facts” is inconvenient and not fashionable.

If Iran succeeds in manufacturing a nuclear weapon it won’t simply end there. It will be like the spoiled child who had to have a toy or a candy — something else will be demanded. Their malign behavior will continue and their desire for a Shia hegemony will remain front and center. Other Sunni nations will then seek similar armaments. And Israel’s Begin Doctrine of not permitting a weapon of mass destruction will be tested.

Consistent with their shrill proclamations, a nuclear Iran will try to destroy Israel, and destabilize the region. Biden’s rush to reset Obama’s appeasement will make the Middle East exponentially more volatile and have a draconian economic effect on a Covid recovering world.

Some American Jewish leaders already demonstrate preference for appeasement, and the recent Georgia Congressional elections have removed important counterbalances. Are leaders of Jewish organizations aware of the existential threat and do they have the courage and foresight to stand tall to apply their voice and influence?

Mitigating this “perfect storm” must transcend all other mandates and missions.