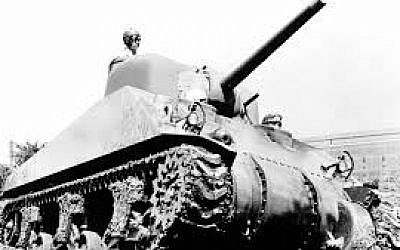 My TV consumption is usually limited to the (extended) evening news, plus the occasional cookery programme, provided it does not involve a competition. I do not watch reality TV or competitions of any kind.

But the times they are a-changing, and Europe is teetering on the brink of something ominous. And so, one afternoon I left the book I was reading and joined my OH to watch a programme on the History Channel. Within a few minutes I found myself drawn into a fascinating documentary about the USA’s preparations for WWII.

As we all know, the USA, led by President Roosevelt, preferred to stay out of the war in Europe, and it was only after December 7, 1941, when Japan attacked the American fleet in Pearl Harbor, that the Americans joined in the war. However, this was not something to be entered into lightly and the necessary armaments and instruments of war had to be manufactured as rapidly and efficiently as possible.

I started watching the programme only after the beginning so don’t know what it was called, all I know is that it proceeded to show in a thorough and extensive way how the various logistical problems were solved. America was the most advanced industrialised country in the world, but was not geared up for producing weapons of war. By dint of the resolve of Roosevelt and the men working with him, American industry was mobilized to manufacture weapons of war rather than the goods and services that had hitherto been produced. Thus, the assembly lines and resources of the Ford factory in Michigan that had been churning out automobiles were converted in order to manufacture aeroplanes. This was a far from simple undertaking, but eventually, by cooperating and combining resources with other manufacturers the ultimate result was the Douglas bomber, which played a seminal role in the Allied victory.

Similarly, the American fleet did not have enough ships and aircraft carriers to carry the war to the Atlantic Ocean. The shipyards in the San Francisco Bay area were too small to produce the quantity and size of vessels required. Here, too, a concerted effort combined with innovative shipbuilding practices enabled the shipyards to produce 1,400 vessels in three years, compared with only 23 ships in the decade prior to 1940.

In addition, the Chrysler plant in Detroit was converted from the manufacture of automobiles to the production of tanks. Women began working in the factories and on the assembly lines, replacing the men who had been called up.

Altogether, a concerted effort of adaptation, ingenuity and cooperation enabled America to fight in Europe and eventually, together with Britain and the Allies, to win the war.

On the evening of the same day I watched a programme on Israeli TV showing in graphic form the events that led up to the destruction of Jerusalem and the Temple by the Romans in the year 70 C,E, The colourful images and dramatic recreation of the events leading up to the final cataclysm depicted the rivalry and enmity between the different groups of Jews in the city, so that each sector fought against the other rather than combining forces against the Roman army. The defeat that emerged in the final event constituted an object lesson in how the folly, vanity and stupidity of human beings can lead to disaster.

Thus, two TV programmes depicting events two thousand years apart, and a huge contrast between two approaches to resolving a problem, taught me an important lesson about the human condition.