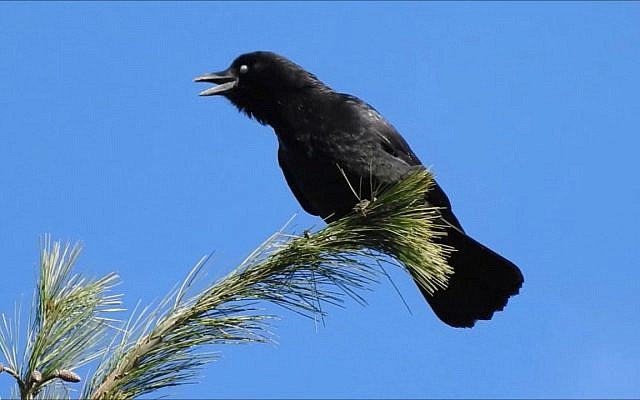 This morning I saw something quite remarkable. As crows will do, they flew from one tree to another. I followed one of them. He finally landed on the tiny top point of a pine tree. I thought to myself, “There is no way that tree is supporting him!” I affixed my gaze on that bird; from time to time his wings fluttered, stabilizing his balancing act. Then he settled down. He made it clear that he was there to stay. I thought to myself, “How on earth does this bird do it? How does he balance himself on a tree top? Does he have special properties to lighten his body?” For the remaining moments I was privileged to see this phenomenon (the bird did eventually fly away). I postulated, “Can birds actually levitate themselves? Have they the innate sense of anti-gravity which we, who are ostensibly more developed, have not?”

Sometimes I wish I could be that bird. When life has us by the boot strings and drags us under, how can we lighten our load? When that bird flies from tree to tree he must instinctively know which trees will support him and which will not. So what can we learn from this?

I then realized something. Sometimes we are like Don Quixote, thrashing out at windmills. We live under the illusion that we actually have an impact on this world. Yes, ours can be an exhilarating life, one of honor, adventure; but also immense frustration. Because in some ways of course we are powerless. So I say to myself, “We need to know what we can influence and what we can’t”. Many of us spend hours immersed in the daily news, whose ten-course meal is prepared for us, sometimes the night before. We often get indigestion. Now, if the crow eats TOO much, it will surely be unable to execute his tree balancing act.

One additional thought. Why does the crow find the highest tree on which to perch? Either he is the flock’s scout making sure danger is not lurking or he has a natural desire to admire the horizon line, to take in the long view which in the early morning hours is phenomenal. So does this mean that crows have an innate aesthetic sense? Or is it that like US, they need beauty to survive? Why then were THEY granted to ability to levitate when we common primates are prisoners to gravity?

Yes, sometimes I wish I could be like that bird. Sometimes when I play the saxophone I imagine that I am weightless, that I am an empty vessel through which the music enters and then is dispersed to whoever is listening. Those moments of “weightlessness” are amazing. I treasure them.

Yes, crows also know what they CAN do and what they CANNOT. Yesterday a crow decide to de-throne our garlic plants. He ate some of them and others he courteously left de-planted but intact. My wife was furious. I told her I would build a scarecrow, something I thought I had left back in New England along with memories of my childhood. Then, scarecrows were everywhere. And they worked. But today we only have people who are scary but it would be hard to ask one of them to stand still on our balcony.

So now, from my meditation on lightness I am dragged to the simple reality of needing to make a scarecrow let the crow know that, unlike his sanctified tree top (where he is King), there are some places which are off limits. This actually puzzled me because I always thought that garlic repulses mammals. Certainly if we eat garlic people will stay away from us. On the other hand, I am not sure crows can smell, and if they can, whether or not the smell of garlic repulses them.

So, how can we achieve lightness of being in the midst of our daily cacophony? How can we possibly continue our rituals of gobbling up ten-course meals of daily news, when most of what we hear we can do nothing about? How can we tolerate the blatant fact that most of what happens around us we cannot influence or change?

Take, for instance, the pending elections. Yes, we do need to know the issues and vote as informed citizens as one normally does in a democratic society. However the fate of our current Prime Minister rests on the decision of someone who he appointed. It is our Prime Minister who is living under the illusion that he is a crow who can balance himself on a fragile tree top and continue to rule. However, as I have mentioned, we are not crows and we do not have the powers of levitation. If we try TOO hard, of course we are doomed to fall. If we live under the illusion that we are invincible, or we have infinite “otzmah” regardless of the pending doom facing us, like the brewing storm that weathermen are predicting for today and tomorrow, then our fates are sealed.

Yes, the crows are eating our garlic. Perhaps they are connoisseurs of Italian food. They probably flew in from the Northwest, protecting themselves from the cold. We on the other hand are here to stay, except for those of us who imagine that we can levitate, when the incredible lightness of being to which we all aspire gets the best of us, when we huff and we puff and we blow ourselves down, falling, falling, to never fly again.