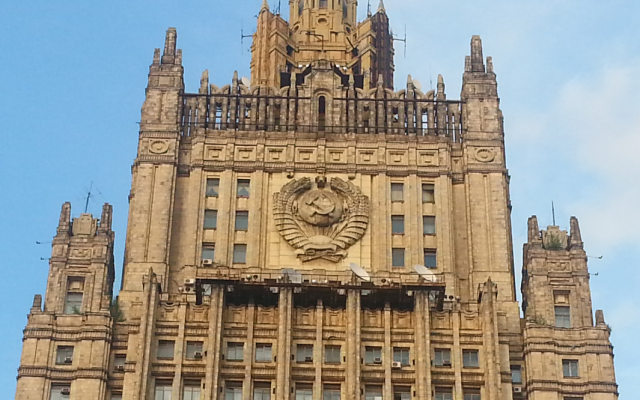 Emblem of the Soviet Union in Moscow: symbol of Newspeak (courtesy: author)

Israel’s Supreme Court, the Attorney-General (AG) and the demonstrators in Tel Aviv and elsewhere fight the current government under the pretext of ‘democracy’. However, their preaching of ‘democracy’ is no other than a disguise of the opposite. As such, they use ‘Newspeak’, a phenomenon described by George Orwell in his famous work ‘1984’. The so-called forces of ‘democracy’ in Israel use Newspeak to prolong the political leverage of their non-elected institutions over the elected Knesset and Government. As Orwell opened the eyes of his readers to see the true nature of communism, likewise, we should realize how these movements undermine Israel’s democracy, under the pretext of guarding it.

With his Newspeak, Orwell warned that a government that creates the language and mandates how it is used can control the minds of its citizens. His focus was especially the Soviet Union. The Soviet Union used terms as ‘all-people’ and ‘all-Soviet’, but all power was in the hands of the communist party, not with truly elected institutions. Likewise, the more (mainly communist) countries used the term ‘democratic’ in their state name, the more undemocratic they were. For example, the (East-) German Democratic Republic (DDR) and the Democratic Republic of Vietnam (North Vietnam).

Why is the term ‘Newspeak’ relevant for the current constitutional fight in Israel? The Supreme Court, the AG and the demonstrators in Tel Aviv (the ‘Lapids’) and other opposition forces continuously use the terms ‘undemocratic’, ‘dictatorship’, ‘authoritarian’, etc, for the overhaul plans of the judiciary, as drafted by Prime Minister (PM) Bibi Netanyahu’s Government. However, this Government rests upon a firm majority of 64 mandatim in the Knesset. By using these ‘Newspeak’ terms, the opposition reveals its true nature: they reject an elected Government and favour the non-elected institutions of Supreme Court and AG, in their capacity to annul decisions of the Government and legislation of the Knesset majority. And as such, they adhere to authoritarian rulership, which they claim to fight. Hence, Orwell’s Newspeak revisited!

What is really going on is a fierce battle for the essence of Israel. Lapid, Gantz and the aforementioned institutions of the Judiciary see their power base threatened. In 1948 the State of Israel was founded as a secular Europe-orientated state, on a socialist footing, with no room for religious Yemenites with ringlets, which did not fit in the Newspeak of the state. In the 1980s, PM Menachim Begin’s Likud Government meant a radical change: no longer were the European socialists of Labour in power, but the conservative Mizrachi Jews from the Middle East. Through the decades the religious component of Israel, both national-religious and Haredi, has grown rapidly, with the result that the current government comprises their political parties, together with Likud. After Menachem Begin’s ‘revolution’, this government is another blow to the forces that wish to keep the state secular and Europe-oriented. That is why they use all means available – including Newspeak – to undermine this democratically elected government. Nevertheless, they cannot stop the process that Israel is becoming less secular and more religious. Demographic statistics show a rapidly growing Haredi minority.

Why do we need a review of the Judiciary? The Supreme Court has decided that Shas leader Rabbi Aryeh Deri cannot be a minister. The AG has told PM Netanyahu to fire Deri. Furthermore, the AG seems to consider to send PM Netanyahu on leave, pending his court cases. These decisions, by Supreme Court and AG, clearly show that the Judiciary exercises an unhealthy control over the other Powers of State, the Executive (Government) and the Legislature (Knesset). One can wonder, who rules Israel, the Government, or AG and Supreme Court? Even Ben Gurion was of the opinion that the Supreme Court should not have the power the turndown decisions of the other Powers. However, in an incremental process of decades, the Judiciary has obtained more and more leverage over the other Powers. I cannot think of any other democracy – be it the USA, or European countries – where the Judiciary has attained such political power, as in Israel today. Rightly so, the time has come to review this process and to take away political supremacy from the Judiciary.

However, diminishing the political leverage of the Judiciary should just be the first step in a review of the constitutional make-up of Israel. Instead of political influence by the Judiciary, Israel should strengthen its Legislature. Most democracies have a Legislature of two chambers, an Upper (‘Senate’) and a Lower House (‘Representatives’). Israel has a one-chamber setup of the Knesset. The formation of a second chamber, possibly elected by way of a district system, could mean a reinforcement of the constitutional structure of Israel and a strengthening of democracy.

I am confident that the endeavours by PM Netanyahu’s Government to strengthen Israel’s democracy will persevere, in spite of any Newspeak by the opposing forces. Light is stronger than darkness!

About the Author
Lieutenant Colonel Royal Netherlands Army (retired) Dr Mordechai de Haas has a PhD on Russian security policy. He was an Affiliated Professor and Research Fellow on Russian security policy towards the Middle East at the National Security Studies Centre of Haifa University. Previously, he was a Full Professor of Public Policy in Kazakhstan. In 1980 he served with UNIFIL in Lebanon, as a conscript of the Dutch army. As an officer he held positions at Army Staff, the Royal Netherlands Military Academy, NATO School and the Netherlands Institute of International Relations 'Clingendael'. At Defence Staff he was the editor of the first Netherlands Defence Doctrine.
Related Topics
Related Posts
Mordechai de Haas