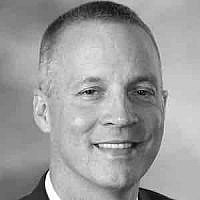 The Blogs
Curt Clawson
Apply for a Blog
Advertisement
Please note that the posts on The Blogs are contributed by third parties. The opinions, facts and any media content in them are presented solely by the authors, and neither The Times of Israel nor its partners assume any responsibility for them. Please contact us in case of abuse. In case of abuse,
Report this post.

After careful and thorough review, I urge my fellow Members in Congress to reject the proposed Iranian nuclear agreement, which I believe is deeply flawed.

First; it’s important to understand that the world does not need any deal – unless that deal renders Iran unable to ever build nuclear weapons.

Without this deal, Iran might cheat and somehow, someday build a bomb or two; but only if we fail to act in advance.

With this deal, Iran will be able to produce as many bombs as it likes. This deal legitimizes the world’s worst state sponsor of terrorism, provides a cash bonanza, and grants a clear pathway to economic prosperity. This agreement allows the regime to build advanced centrifuges, continue uranium enrichment, become a legal nuclear threshold state, buy conventional weapons and ballistic missiles, freely export energy, fund terrorist proxies, threaten Israel, hold American prisoners, and even, via secret side deals, self-inspect nuclear weapons research sites.

So let’s block the deal – and then advocate that this Administration, or the next, leverage America’s economic influence and global clout – to recommit our allies and restart negotiations. Let’s insist on a far better agreement – with conditions that are absolutely essential to long-term global security.

This time, let’s insist on the original goals. Iran must dismantle its nuclear infrastructure, which is left virtually intact in the proposed deal. Let’s close every pathway towards nuclear weapons. And this time, let’s demand some behavior modification as well.

In response, the deal’s advocates will argue that what’s been negotiated is the best deal possible; and that renegotiations will never happen.

To claim we can’t force a new deal grossly underestimates the leverage we have. Access to the U.S markets, U.S. trade, and U.S. financial institutions is crucial to most of the free world’s nations and companies. Our technologies, world-class companies, and banks are the linchpins to trillions of dollars of intertwined global transactions. America is the engine for economic growth of the entire world.

To not leverage our global clout and influence squanders an historic opportunity, seven decades after Hiroshima and Nagasaki, to avoid nuclear disaster. Yet it seems we don’t even try to use leverage. Why? Do we not understand that we hold the upper hand? Are we afraid of being seen as a bully? We’ve got to negotiate from strength, like we do in successful business deals.

Let’s give others a choice; especially the transnational energy giants: deal with us, or deal with Iran. I like our chances here.

Let’s wake-up-to and leverage the fact that Iran needs a deal far more than we do. Let’s intensify the pressure that isolated, economically crippled, and brought Iran to the table in the first place – and force new negotiations.

The idea that the whole world likes this deal is simply false. Ask Israel and our Arab allies. Those most immediately impacted are deeply concerned that this deal will further destabilize the region. A new arms race has already begun. And there are troubling signs of possible nuclear proliferation in the world’s most dangerous neighborhood.

These realities belie the notion that rejection of this deal could lead to war with Iran. The opposite is true. The prospects of increased near-term violence and long-term devastating regional conflict rise considerably if we unleash and enrich Iran, while legitimizing and enabling its nuclear program. Iran will protest and threaten – but its future capabilities are limited if we keep the regime handcuffed.

There’s ample precedent for Congress to deny the proposed deal. Congress has flatly rejected or substantially modified some 200 international agreements that had been negotiated by a president. Let’s force a new agreement that prevents Iran from negatively altering the course of human history. That’s exactly what’s at stake here. There’s no rush. Let’s take all the time needed.

If instead Congress approves the proposed agreement, the consequences would be horrifying. In 2030, Iran would be a nuclear threshold state and the beneficiary of 15 years of economic and military expansionism, with grandfathered industrial partnerships. It would be naïve to expect that, by 2030, the regime would have ended its hegemonic ambitions or combative posture towards America and our regional allies. Or that democracy might supplant the ideology upon which the Islamic Republic is founded.

There is every reason to believe that, by 2030, Iran’s expanded support of militant proxies would have plunged the Middle East into greater chaos than today – and that a prosperous Iran, capable of producing many nuclear weapons, possessing long range missiles, and sponsoring terrorism globally, would pose an existential threat far beyond the region.

Fifteen years is just a blink in history – especially for Persia and the Middle East.

Would we support the proposed deal if Iran were located in our immediate neighborhood? Would we support a nuclear agreement with any other avowed enemy? Of course not. Well, the distance from Havana to Washington D.C. is 1,130 miles. The distance from Tehran to Tel Aviv is 985 miles. Saudi Arabia and the Gulf States are even closer.

Our national emblem is the eagle; not the ostrich. Let’s not bury our heads in the sand and act as if the Islamic Republic of Iran would never threaten or target future generations of Americans. For our children, our grandchildren, and the future of the civilized world – let’s leverage our global influence. Let’s insist on a new deal that permanently dismantles Iran’s nuclear infrastructure.

About the Author
Curt Clawson (R-FL) has represented Florida's 19th District in the United States House of Representatives since 2014. He sits on the Foreign Affairs and Homeland Security Committees.
Related Topics
Related Posts
Curt Clawson
Comments