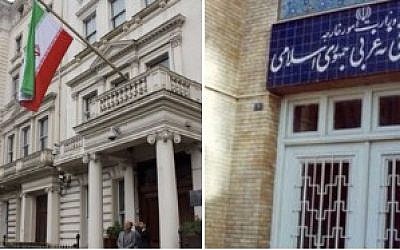 Addressing the European Union and the Foreign Ministries of European Nations

Since its inception in 1979 up to the mid-2000s, the Islamist regime of Iran would always target its opponents in Europe through assassination operations. The regime carried out these terrorist attacks by the hands of its Iranian, Lebanese, Syrian and Palestinian minions in different parts of Europe. Regardless of its pledges to European countries to stop these terrorist attacks after the Mykonos incident in Berlin in the early 1990s, the Islamic Republic continues to engage in conspiracy against its opponents on European soil by collecting information on the dissidents and photographing their gathering places. And when the regime faced a recent boycott of its dreaded intelligence ministry by the European Union, it threatened to exacerbate terrorism on European soil.

As such, during this entire period, the intentions of the Islamic Republic have not been hidden from the eyes of the security apparatuses of the European countries. However, today the main concern of the Islamic Republic is no longer to eliminate its mostly poor dissenters who reside across the continent of Europe. Rather, the Islamist regime pursues broader goals through its embassies, consulates, diplomatic offices, and even mosques and religious and academic centers, in the guise of highly costly “cultural activities.”

The most important of these goals is the spread of Islamism and terrorism on European soil in order to undermine the security of the continent and stir disunity between the European Union and the United States of America. Through the simultaneous propagandist and terrorist activities in European territory, the Iranian regime has sought to undermine the lasting unity of the Western Bloc that has survived since the Cold War. This has created openings to further the Islamist discourse of the Iranian regime and its supporters, China and Russia, not only in the Middle East and Europe, but also the rest of the world.

With that in mind, today, more than ever, the European Union needs to shut down all the diplomatic centers of the Iranian regime on European soil. In order to avoid troubling ordinary citizens of Iran and Europe as a result of that move, simple consular activities such as obtaining visas and issuing or renewal of passports can be delegated to the offices of the interest sections of the Iranian regime in the embassies of third-party countries on European soil. It is imperative to shut down these centers in order to preserve Europe’s security, consolidate the unity of the European Union and the United States, and isolate the Islamic Republic as the greatest state sponsor of terrorism in the world. The oppressed people of Iran as well as the regime’s opposition all over the world will gladly welcome such a positive move.