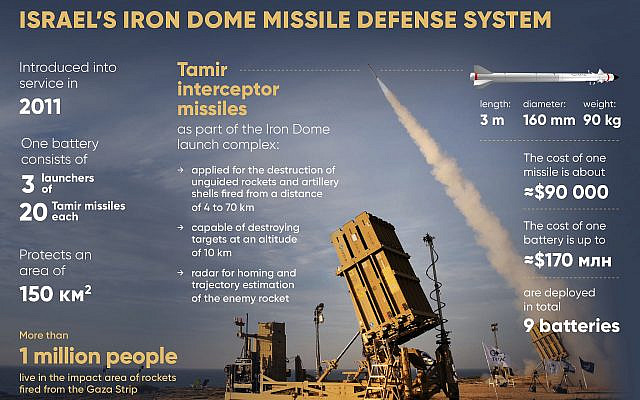 The Iron Dome. Picture by Jewish Confederation of Ukraine
The scale and effectiveness of Israel’s Iron Dome missile defense system is truly impressive. The flashes of explosions in the skies over Tel Aviv are a vivid illustration of the defense strategy of the state, which lives under constant threat and considers its main goal to protect the life of every citizen. More than 1,500 rockets have already been fired in the direction of Israel during the rocket attacks from the Gaza Strip, which have been going on since Monday. Unfortunately, at least 7 people have been killed in Israel. But there could have been many more victims of the shelling.
Numerous videos showing the work of the Iron Dome missile defense system can give the wrong idea that all missiles flying towards Israel are being intercepted. In fact, most of the missiles fired into the Israeli territories are unguided and pose no threat to the populated areas. Therefore, the Tamir missiles used in the Iron Dome, before intercepting a target, assess its trajectory and destroy it only if the rocket is flying towards a populated area.
This selectivity is economically justified: the cost of launching each Tamir missile costs about $90,000, and there are 20 of them in just one launch complex. In addition, when a missile hits residential areas, the state pays compensation to the local community in the amount of $250,000, which is a good incentive for continuous efficiency improvement of the Iron Dome technologies.
From 2001 to 2011, before deployment of the Iron Dome, about 11,000 rockets had been fired into Israel from the Gaza Strip, and bomb shelters were the only escape from them. Since 2011, the number of casualties from rocket attacks has decreased many times, and the interception efficiency has increased to 90%.
In the immediate vicinity of possible provocative shelling sites, the Iron Dome, with its ability to respond to launches from a distance of 4 km, is the best defense system against short-range rockets. But I still hope that in the near future, the reasons for bringing the Iron Dome to combat readiness will disappear, it will be put back on standby, and peaceful life in Israel will be restored.