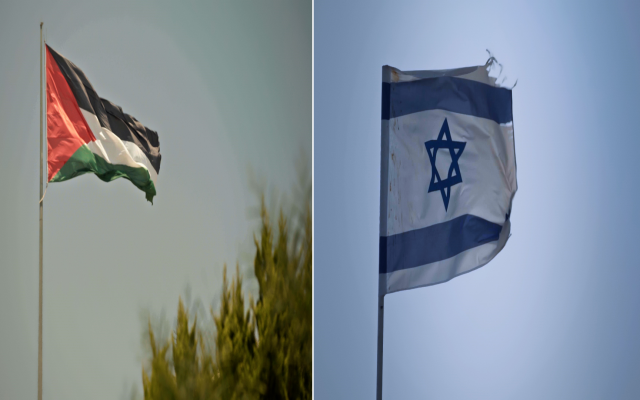 The opening shot is of graffiti on the Palestinian side of the Israeli security fence. Then cut to a scrum of plain-clothed Arabs flanking documentary narrator and co-producer, Todd Morehead. 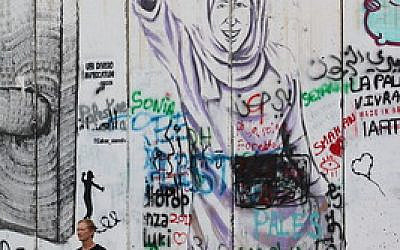 There is an argument. In protest someone explains, the filmmakers are trying to tell ‘both sides’ of the story. Somebody else files a verbal threat: any footage that is taken will be erased. Now, fade to black. In the next sequence, the question ‘What is Zionism?’ is posed to a heterogeneous census on both sides of the Green Line. And thus begins the film, HOPE IN THE HOLY LAND, presented by the Philos Project (Christian Advocacy in the Near East). A documentary that is as full of ‘however[s]’ as it is devoid of ‘therefore[s]’, Morehead’s and Justin Kron’s work presents a plethora of questions, but does not draw too many conclusions. This enables it to radiate its high-quality of entertainingness, without coming off didactic.

HOPE IN THE HOLY LAND features troves of rare footage taken around Israel and Palestine; scenes of war and scenes of peace. Especially to be treasured are the grainy black-and-white clips of Israeli versus Arab forces fighting, and Palestinian refugees from the 1948 war. As for more nascent, and therefore, perhaps more relevant footage, clips from one of the many relatively recent Beit Jala protests, in the West Bank, are included. Along with this footage, are interviews with a skewed roster of opinions, expert and sophomore, bourgeoisie and proletariat; and the wanderings and ramblings of narrator and interviewer, Todd Morehead. 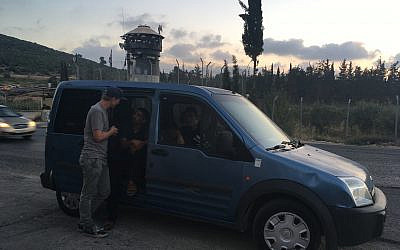 It is evident that Morehead, the young Christian minister, seeks in his sojourn[s] throughout the Holy Land, to reconcile ‘the conflict’ with his own deeply spiritual faith. “How do I love and support the Jewish people, and yet love and support the Palestinians at the same time?” he asks, “If my theology doesn’t compel me to love my enemy, then I need a new theology.” Kron’s and Morehead’s refusing to take sides in their journalistic-cum-cinematographic narrative employs a device which collects many conflicting points, from various corners of society: Palestinian and Israeli, Jewish, Christian and Islamic. There is an interview with a Jewish Israeli man saying, “Our independence is their Naqba. No one wants to deny the Naqba, the Naqba is a reality.” Yet, the film also cinematographically tells of the atrocities of the Palestinians onto the Jewish population inside the borders of Israel. For example, there is footage of the Hebron massacre of 1929, and along with pictures of the train tracks in front of the gates to Auschwitz-Birkenau in the snow, there is even mention of the Grand Mufti Haj Amin al-Husseini’s collaboration with Adolf Hitler and the Nazis during World War II.

The unemployment rate in Palestinian territory is staggering; but not all of the confusion in Palestine is necessarily their fault, by now: “I think if I grew up here,” begins Morehead during one of his voiceovers, “and I saw IDF soldiers all the time, with their guns out, and even drawn on me, it would have an affect on me…I think it’d be easy to hate them.” In another snippet, he admits, while he originally identified more with Israelis and even thought of Palestinians, loosely, as an “enemy”: “You cannot deny the suffering of the Palestinian people.” The film slowly, painfully, documents Israel’s denying the Palestinians access to medical treatment; patients such as women in labor, who, according to horror stories, weren’t able to make it to the hospital on time, due to nationalist bureaucracy at checkpoints. Narrator Todd Morehead, at one point in the film, visits a Palestinian family in the West Bank and hears the story about a pregnant cousin of this family’s, who was suffocated by Israeli-fired tear gas—fired, albeit indirectly—and as a direct result, the baby emerged from the womb, “disabled”. But there is another side, and it is unclear whether Justin Kron and Todd Morehead are showing it purposely or not: the Palestinian man, telling the story, is smoking a cigarette while he talks, next to a child inside his living room. 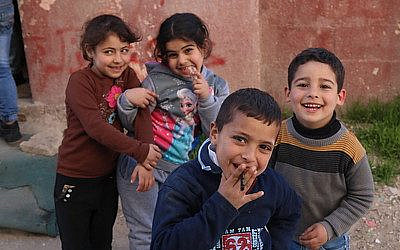 Astute observers of cinema will surely notice the hypocrisy, especially given the reality of anti-Zionist and anti-Semitic rhetoric and actions coming from deep within the Palestinian Authority (PA) territories. While the Palestinian elder tells the tale of Israeli tear-gas suffocating the unborn, his own second-hand cigarette smoke perhaps suffocates the child in the room while, perhaps, even poisoning himself. Yes, other sides of the story are told, such as, Palestinian despotism. For example, within the Palestinian Authority (PA), Muslims can’t sell land to Jews because it’s an automatic death penalty. One soundbyte states and rather truthfully, “While convicted terrorists are in jail, they get a monthly salary,” referring to the ‘pay-to-slay’ program that has held sway under longtime Palestinian Authority President Mahmoud Abbas. In one scene, in a Palestinian village in the West Bank, Todd Morehead picks up a copy of Mein Kampf, translated into Arabic. When he asks a group of Palestinians, “Do you believe Jews were behind 9/11?” he gets a response from his Palestinian interlocutors in the affirmative. While in the Palestinian Authority (PA) territories, Todd unknowingly interviews a former member of al-Aqsa Martyrs Brigade, whose identity only becomes known when he sees a picture on the wall of a small cadre of gun-wielding terrorists. “I see why he was in jail, now…” says the narrator, almost to the point of comedic effect.

Other stories are told, and the co-producers strive to tell all sides of the various issues. For instance, the problem of water distribution has two sides, says a Palestinian. The money donated to the Palestinian Authority (PA) to repair the infrastructure does not get spent on solving the water issue, or is squandered in certain irresponsible ways. Whereas, meanwhile, on the Israeli side of the fence, a Jewish owned bakery/factory employs Palestinians (one of whom, earned enough to build his own large home). 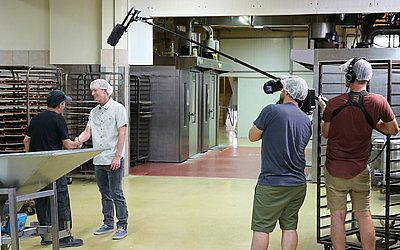 Todd interviews Sami Awad, a Palestinian-American Christian, who tells the story about how he came to understand and love the Jews, when he was invited on a retreat to the Auschwitz-Birkenau death camp in Poland. Mention is also made of the Deir Yassin massacre, an atrocity the early Israeli Zionists perpetrated upon innocent Palestinian Arabs, including women, children and the elderly. One interviewed Palestinian, in light of the Nazi atrocities on the Jews during the Shoah, says, “I refuse to be a victim of a victim.” 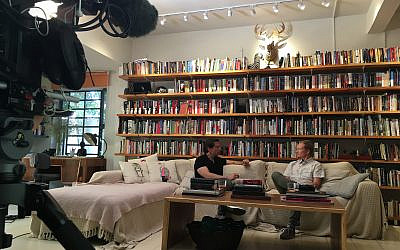 Aside from Sami Awad, the interviews in the film are with Palestinians whose identities have been protected; as well as upwards of 20 other regional characters, from all religions and creeds, walks in life, vocations, areas of expertise and opinion.  Among the two most impressive of all the interviews in the documentary, is the interview with internationally-renowned Israeli journalist, Ronen Bergman, of the Israeli newspaper Yediot Ahronot (and sometimes published in The New York Times Sunday Magazine, as well as elsewhere); and an interview with retired American-born IDF Col. (Ret.), Miri Eisin, who explains the Oslo Accords to the narrator: Area A (Palestinian Control/Self-Rule); Area B (Palestinian/Israeli Control “Palestinian self-rule, but Israeli security responsibility”); Area C (including settlements, Israeli Self-Rule); and it is stated, matter-of-factly: 95 percent of Palestinians live in Areas A and C.

No pains are taken to hide the fact that, above all else, this is a Christian movie. And with all the bad news that comes out of the region, the narrator undergoes an existentialist crisis, somewhat, with regards to his deep Christian convictions. His relationship with Christ is put to the test in the land where his god (in human form) walked. In the Holy Land, he feels “a heaviness for Him; a burden for Him.” (58:00) Meanwhile, Democracy is the subject of discussion when the screen shows a perfectly symmetrical picture of the Bahai Gardens. As for BDS (Boycott, Divestment, Sanctions), there are clips of both Congresswoman Rashida Tlaib (D-Mich) and Congresswoman Ilhan Omar (D-Minn) calling for the pecuniary measures to be taken, likening BDS to the boycott in America of Nazi Germany in the ’30s and ’40s; but to counter this, there is a clip of Bill Maher, from his show on HBO, saying, “BDS is a bullshit purity test by people who want to appear woke but actually slept through history class.” 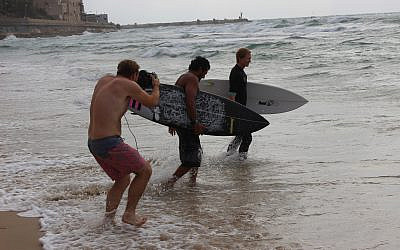 As its title augurs, the film is not pessimistic, but hopeful, a rare perspective on the conflict, despite an epiphany in the form of posed soliloquy by Morehead that things are even worse and more fractured than he originally thought. And as the viewer gets reminded during the surfing vignette at 48:00, amidst some of the heaviest subject-matter to choose from out of all the geopolitics and religious strife, the globe over, this is cinema which was produced with erudition, grace and compassion.

The film, of which, Col. Richard Kemp, Former Chief of Command of British forces in Afghanistan, said, “If there is one film you’re going to watch to understand the Israeli-Palestinian conflict, HOPE IN THE HOLY LAND is it…”, “models the approach to the Palestinian-Israeli conflict that I’d long hoped to see among Christians…” wrote TimesofIsrael.com blogger, Yossi Klein HaLevi, in an endorsement on the film’s website. Directed and shot by Jesse Schluntz and Andrew Thompson, with an original score by Dustin Wise and animation by Matthew Lawless, the just-short-of-two-hour documentary is co-produced by TimesofIsrael.com blogging, minister and Christian Zionist, Justin Kron, and surfer-cum-Christian minister, Todd Morehead. The film, which is slated for release from a heavily peeked-at and critically acclaimed can, on May 14, 2021 (the “73rd Anniversary of the Palestinian Naqba”), will also be available on a bevy of streaming platforms: AppleTV, GooglePlay, Prime Video, Vimeo on Demand, VUDU, and a possible blue-ray release is supposedly in the works.

“[A]dding faith and theology into the mix usually makes matters even harder,” wrote Daniel Gordis for his endorsement of the documentary, referring to the problem of creating a documentary that does justice to the nuances of the conflict, “HOPE IN THE HOLY LAND is…[s]ensitive and insightful, it is a model of how people of faith, and indeed, all loving human beings, can embrace learning about and feeling for everyone who is part of this hallowed but also conflict-riven region.”