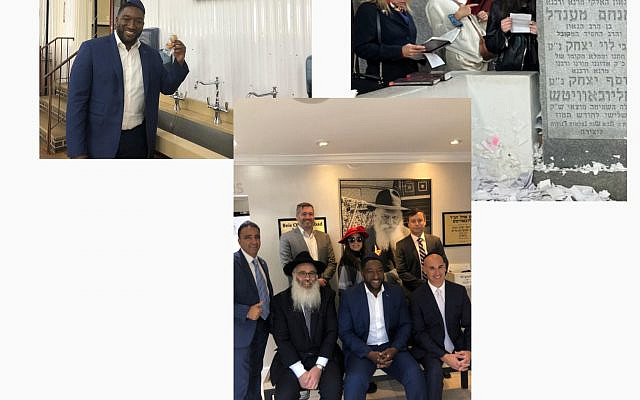 I visited the Ohel regularly. So it was an extreme honor to be asked to join two candidates for elected office.

I was honored to coordinate the visit for Joe Pinion, candidate for United States Senate against Senate Majority Leader, Chuck Schumer.

Pinion, the host of Newsmax’s Saturday Agenda, left to pursue his dream of helping others and run for office.

“My Jewish opponent Chuck Schumer has actually gone so far as to defund Israel in order to appease other interests abroad. He has remained silent in the face of antisemitism and has alarmingly abandoned Israel at a time when stability was necessary. As Senator, I will fight for the Jewish people, recognizing Judea and Samaria not as occupied territories, but as part of the Holy Land, an undivided Jerusalem. I will also encourage school choice and quality education that talks about Jewish history, Israel and Holocaust. My fight is not Left vs. Right, it’s right vs. wrong. The time has come to elevate our politics and support one of our most crucial allies,” said Pinion.

Rabbi Zalman Wolowik, Rabbi of the Chabad of the Five Towns, who gave the opening prayers at the Jerusalem Embassy Opening led the prayers by the gravesite of the rebbe. Joining us was Rabbi Shimon Kramer of the Chabad of Merrick. 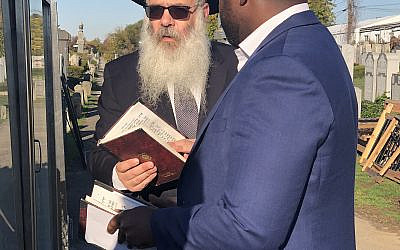 My first conversation with Leora felt like catching up with a cousin you haven’t spoken to in a while because you both are campaigning and speaking up for American Jewish issues like rising antisemitism and supporting  Israel.

“I’m running for Senate to lead the fight for freedom.”

Leora Levy is running against Senator Richard Blumenthal. Levy is endorsed by President Donald Trump. She opposes job-related vaccine mandates, supports second amendment rights and will do everything to secure our borders.

Levy was born in Cuba in 1957. Her mother and grandparents fled Lithuania in 1940. Her family migrated to the United States in 1960 to escape Fidel Castro’s regime. She is fluent in Spanish.

Most importantly, both were in races that nobody thought they could win, until now!

Both are now considered serious contenders with excellent chances of winning in blue states with large Jewish populations. Both states’ top priorities are crime and the economy.

Early voting is underway. Election Day is on Tuesday, November 8th. Sitting out is not an option.

I have been advocating for months that the Jewish vote will make a difference.  Jewish donors, volunteers and voters are already making the difference in local, state and national races.

We hear about the Spanish vote, the Black vote, the Asian vote and the youth vote, but we don’t hear much about the Jewish vote. 2022 will be the year of the Jewish Republicans.

We will no longer sit silently as the agenda of the Biden administration includes an Iranian Nuclear Deal, a falling economy, defunding the police as antisemitic crimes increase daily, and supporting a Palestinian leadership that looks to destroy Israel.

In her debate, Levy came out swinging with accusations that Blumenthal had gone along with Biden economic policies he knew would spike inflation.

“This inflation was deliberately inflicted on us by the Biden policies, voted for by my opponent, the trillions of dollars of spending which Larry Summers, a Democrat economist, warned would cause record high inflation,” Levy said of Blumenthal’s record. “And that’s what we’re facing. First thing I would do is to stop spending.”

Jews will no longer vote for an education policy that targets Yeshiva funding and the discrimination of the hiring of Jewish teachers in public schools. We will never support the curriculum of Holocaust denial and the prejudice against Jews and Israel. We will never support colleges that don’t admit students based on merit and allow Jewish students to be bullied or groups not allowed to meet peacefully.

Schumer brought up Trump so many times that Joe Pinion finally responded, “Donald Trump is not running for US Senate in New York,” Pinion added. “You are, sir. You are the one who had that rhetoric of promoting violence and hate and do you apologize to Justice Kavanagh?”

We need peace, we need new power and we need Joe Pinion and Leora Levy.

Cindy Grosz is The Jewess Patriot, Radio’s Premiere Jewish Activist syndicated through Conservative Television of America, Real Talk Radio and the Black and White Network.  The show streams through RokuTV, Amazon FireTV,  iHeart, Spotify and Deezer and out of Israel through Jewish Podcasts.   She ran as a pro-Trump congressional candidate in 2020. She is the chair of Jewish Vote GOP and a Jewish advisor for many 2022 candidates.  Her lawsuit against the NYCDOE exposes scandals and corruption within public schools.  She can be reached through jewishvotecounts@gmail.com.