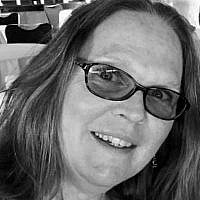 The Blogs
Alice Gershuny
Apply for a Blog
Please note that the posts on The Blogs are contributed by third parties. The opinions, facts and any media content in them are presented solely by the authors, and neither The Times of Israel nor its partners assume any responsibility for them. Please contact us in case of abuse. In case of abuse,
Report this post.

Do you have a passport? If the answer is yes, the first thing I want you to do before you continue reading is to get that passport and check the expiration date. Depending on that date, this will help you decide whether or not you will travel internationally any time soon. Over the past (very long, stressful, anxiety-provoking) six weeks, especially over the year-long course of a worldwide pandemic, I have learned that this is vital if you are an international traveler.

“After an application is mailed by the applicant or the Acceptance Facility, it arrives at a data entry and payment processing facility — Online Status: “Not Found””

So, before you even begin to apply for a new passport or renewal of one, make sure to read everything that’s on the State Department’s Bureau of Consular Affairs website for application of passports. WARNING: There are A LOT of colors and words and boxes and numbers and disclaimers, so if you’re ADHD (not unlike myself), this website is NOT for you (I personally think that’s the idea — less people to deal with for the state department employees). If you’re easily distracted, make sure to have someone who is NOT easily distracted by colors and words and boxes and numbers and disclaimers at your side while applying (something I should have done six weeks ago, but, hey, I’m ADHD and impulsive, so…). The specific box, “Processing Times,” I should have seen/read would have informed me that processing times take 10-12 weeks. HOWEVER, if I had seen/read that box, I would have discovered that if I gave the state department an additional $60 to the $110 for the passport, I could have had my passport application expedited and received my new passport in 4-6 weeks (but not necessarily promised depending on how overwhelmed the processing center was at the time I applied, which just so happened to be five months after the former government slashed the state department’s budget).

Once you (and your application assistant) have completed the application, I highly recommend that you have your application tracked. This was something I didn’t think of, but was thankfully recommended by the postal worker at my local post office. It was the only way I knew that my application and passport had been received at my assigned data entry and payment processing facility seven days after mailing it, although it was actually received five days after mailing, which is ridiculous, considering the agency is in Philadelphia, a 10-minute drive from my home. Unfortunately, thanks to this world pandemic, the agency is not taking any in-person renewal appointments…unless you know someone…

With this confirmation, five weeks before my flight, I looked up my status online, getting the message “Online Status Not Found,” causing a mild panic attack. What I also didn’t know was that “Online Status Not Found” was no big deal. But, since I didn’t know that because of all the colors and words and boxes and numbers and disclaimers, I decided to call the state department to see what the holdup was with my renewal. After an hour-long hold, I was told that my application wasn’t in the system. S**t! That’s when the hubby suggested I contact our local congressman.

Calling my local congressman’s office, I tried desperately to keep my emotions at bay to no avail. You see, I haven’t seen my only child who lives in Israel since March 12, 2020, one day after her 21st birthday. That’s 15 months — 15 months of IDF service and living on the Gazan border, over 5,000 Hamas/Islamist Jihad rockets and all-out war. If you’re a parent, imagine not seeing any of your children, let alone an only child who lives in a dangerous situation, for a year and a half. Thankfully, I had a twenty-something, very empathic individual with a strange and unique name to hear me. By the end of the day, I had someone to represent me. I was reassured that everything would be done to make sure I got my passport ASAP.

But, of course, at the end of week two, after seeing that “Online Status Not Found” message, my ADHD kicked in and insisted I call the state department again, only to be told the same thing — you’re not in the system. S**t!

By week four, I finally got a very kind and patient employee with a wonderful southern drawl who explained the process to me. When I was told that my application “arrives at a data entry and payment processing facility,” it wasn’t my local agency. Here’s what actually happens — when your application arrives at your assigned facility, it is then sent out to a passport agency ANYWHERE in the United States. In other words, when your application arrives at your assigned facility, it isn’t entered or payment processed. It is sent out to another facility somewhere else in the United States. BUT, because your information isn’t entered or payment processed, you’re not in the system, so they can’t tell you where your application is sent or where it is while in transit. However, she reassured me that “it’ll turn up soon sweetie, it’s been four weeks.”

By week five, and only one week left until my departing flight, even my appointed congressional wing person had had enough. That’s when we learned that my passport and application were officially “missing.” Turning up the heat, my wing person “demanded” my passport and application be found ASAP or I be given an emergency appointment to get a new passport altogether. For those of you who haven’t had to get a new passport over the past few years, it’s virtually impossible to get an in-person appointment. You can’t call to schedule an appointment until two weeks before your departing flight, and the appointment has to be three days before your flight — no more, no less. However, when calling two weeks before your flight, there are absolutely no appointments available three days before the flight. In one of my many calls to the State Department, I was told “not to bother” because I would never get an appointment. She was right…unless you know someone.

Leaving my congressional wingperson’s “demand” at a “don’t-ask-don’t-tell” level, eleven days before my departure, on a Friday, I accepted the emergency appointment scheduled in Philadelphia exactly one week later with less than four days to spare. I also agreed to pay the $60 expedite fee, as well as the cost for overnight delivery. Raising concern about my old passport and $110 check floating out in universal limbo and fears of having my identity stolen, as had been the advice given over the past five weeks, I was told to keep checking on my bank account to see if the $110 check cleared. If the check did clear, my congressional wing person would assist me in getting the $60 expedite fee and overnight delivery paid immediately and cancel my appointment. What to do if the check never cleared or my passport never found would be the next step I didn’t want to know about. S**t!

“Then, the application is sent to a passport agency or center where it is adjudicated by a passport specialist – Online Status: “In Process””

Obeying my congressional wing person’s advice, I kept tabs on my bank account several times a day, every day, only to see a “no results” every time. By the Monday afternoon before my appointment, I had given up all hope and made the decision to put a stop payment on the $110 check for a $30 fee and informed my bank of the “missing” status in case someone tried to cash it. And, of course, guess what happened? Tuesday morning, checking my bank account once again, I see the $110 check pending payment followed by the $30 stop payment fee. S**t! I immediately called my bank and requested to stop the stop payment, explaining my current passport situation. As luck would have it, the representative at the bank was in a very good mood and told me she had canceled the stop payment and returned the $30 fee to my account. I immediately contacted my congressional wing person to tell her what had happened. Now we knew that if the check was deposited, my old passport and application had to be “in process.”

But, as my life oftentimes goes, that wasn’t going to be the end of my story. After contacting the New Hampshire State Department and giving them my credit card to charge for the expedite fee and overnight delivery, I checked my bank account one last time…only to find the pending $110 check…had vanished. S**t! Calling the bank to question its vanishing, I was informed that the stop payment did go through despite what I had been told the day before, thereby leaving the $110 check no longer cashable. S**t! Back on the horn to New Hampshire, I got a voicemail…all five times that I tried to call back. S**t! By the sixth call, my miracle worker answered the phone! I reminded her of my situation and begged her to let me charge the $110 on my credit card, giving her full permission to do whatever she needs to do to make this happen. Thankfully, this particular passport specialist was a godsend and took care of my little problem without hesitation.

“Once approved, the application information is digitally transferred to a book print facility where the passport is printed – Online Status: “Approved””

At this point, my congressional wing person and I had regular contact to keep me up to date on where exactly my passport was in the mailing process. I was assured that my passport was on its way to be printed.

“Once printed, the new passport is mailed to the applicant. Citizenship evidence documents are returned in a separate mailing – Online Status: “Mailed””

By Thursday morning, I was informed by my congressional wingperson that the new passport had been delivered. Not having heard a knock on the door or a doorbell ringing, I instantly checked my front porch, and there it was, my package from the New Hampshire State Department. Ecstatically relieved to have finally received my passport, I momentarily found myself equally enraged that the carrier simply tossed my package onto the front stoop, disregarding the IMPORTANT STATE DEPARTMENT DOCUMENTS ENCLOSED labels all over the envelope. What if I hadn’t been told about its arrival?! I imagined being right back at square one after someone stealing my package and having to do this all…over…again. I quickly wiped this thought out of my head. My passport had arrived!

I thought not having my passport was the most stressful part of planning this trip, aside from the mini-war taking place in Israel at the time…until I learned about the approval process to get permission to enter Israel…and my trip was now being postponed…S**t!

I didn’t have the heart to tell my congressional wingperson and graciously thanked her for all her hard work and perseverance.

About the Author
Alice is an unemployed former social worker and current stay-at-home-mommy to her two elderly cats, Blintz Souffle and Latke Dreidel. She began blogging in 2016 with "My Gump Ride," a 3-year, 2-month, 14-day and 16-hour therapeutic bicycling process ala Forrest Gump, chronicling her older brother's death from cancer. More recently she has been writing about her many travels to and in Israel.
Related Topics
Related Posts
Comments
Advertisement