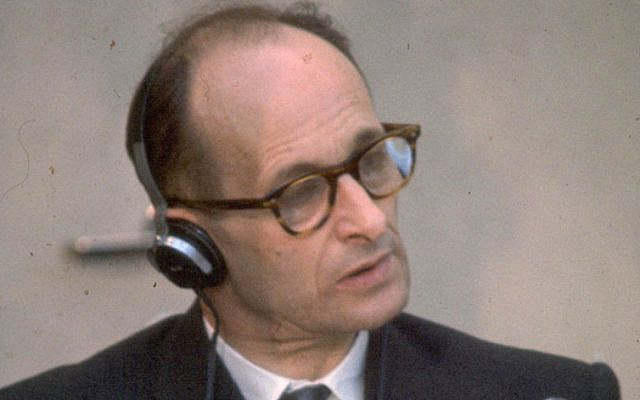 Sixty years ago this month, a sick El Al airline employee —clearly identifiable by his uniform — was bundled into a first-class seat on a flight from Argentina to Tel Aviv. He was heavily sedated and unconscious, unable to exchange pleasantries with other passengers.

The curious among the passengers as to the identity of the unwell El Al staffer did not have long to wait. For this was Ricardo Klement, better known to the world as Adolf Eichmann, the primary architect of the Holocaust. He had been kidnapped by a crack Mossad team in Buenos Aires, where he had been living in relative safety since escaping defeated Germany at the end of the war.

The story of Eichmann — hanged after being put on trial in Jerusalem, his ashes ultimately scattered in the Mediterranean to prevent his burial place becoming an inappropriate shrine — bears retelling. It is an important story in the annals of the Holocaust, not least because his capture, and trial, marked a sea-change in the way Israelis and Jews thought of themselves. Perhaps it is not too fanciful to suggest that Eichmann’s kidnapping, and 56 days in court, provided a vital link between the diaspora and the state of Israel, a relationship which has proved more and more rocky as the years have gone by.

The Israel of 1960, even before the seminal Six Day War, is almost unrecognisable to us today. It was a country of privation and desperation, a place where Holocaust survivors barely spoke about their terrible experiences, where the words “aunt” and “uncle” or “grandparents” often had no biological basis. The “can-do” attitude that made Israelis rely on themselves, enabling them to change the narrative from “poor, plucky little Israel” to “hi-tech Middle East Big Beast”, was almost unimaginable in 1960.

At the same time, those involved in Eichmann’s capture and subsequent trial were wise beyond their immediate circumstances. Though it was not felt possible that any citizen of the state of Israel could offer him with a legal defence, provision was made for him to be represented by foreign lawyers — in this case, from Germany. Gideon Hausner, Israel’s attorney-general, was the lead prosecution lawyer. In his opening address he made it clear from the start that in arraigning Eichmann, “it is not an individual that is in the dock at this historic trial and not the Nazi regime alone, but antisemitism throughout history”.

Reading such words 60 years later, it is hard not to marvel at the temerity of Hausner in seeking to put an ideology on trial. The world’s press, who attended the trial in their hundreds, had the first global opportunity to assess the Holocaust’s bitter legacy — and perhaps many of them thought that with Eichmann’s execution, the spirit of antisemitism and what it stood for had been executed, too.

We know, of course, that that was not remotely the case, and in the decades since, examples of antisemitism have repeatedly surfaced, among far right-wingers, the extreme left, and even among some delusional Jews. It’s become like an insane and volatile version of the whack-a-mole game: just when you think it’s defeated, up it comes again.

In our plague-ridden present, I can’t help but raise a glass to the daring captors of May 1960, who brought Eichmann to justice — and shone a light on his genocidal crimes for the whole world to see.

They deserve our thanks: we owe it to them and the Holocaust survivors to keep retelling the story.