The Blogs
Rachel Grenadier
Apply for a Blog
Advertisement
Please note that the posts on The Blogs are contributed by third parties. The opinions, facts and any media content in them are presented solely by the authors, and neither The Times of Israel nor its partners assume any responsibility for them. Please contact us in case of abuse. In case of abuse,
Report this post. 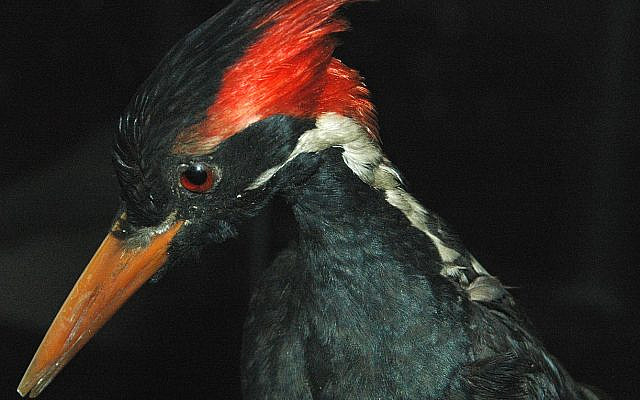 I awoke this morning and as is usual, I checked the news on my smartphone. The news immediately saddened me immensely and not because our government may shut down completely tomorrow night, or because we have a seriously dysfunctional government unresponsive to our basic needs; but rather because a declaration was made that the iconic ivory-billed woodpecker is now extinct.

How did this happen? Don’t we have a federal law protecting wildlife species in America? The answer is “yes.” We have the Endangered Species Act which was passed into law in 1973 at the dawn of the environmental movement. And yet, we have had thousands of creatures on this plant slide into extinction since then and many more are threatened each day. Many of you will say “so what?” And toss it off as the price we pay for living in a modern world. All I will say to that is don’t get too attached to having lox with your bagel and cream cheese in the near future. Salmon is a highly threatened species of fish, thanks to overfishing, overheated breeding waterways and drought brought about by human-caused global warming. Most people don’t even realize that the “red fish” they believe is real salmon, really isn’t. We have substituted one species of fish for another, and no one seems to care until they see how much they are paying for authentic salmon.

Many humans think it really doesn’t matter if we lose some wildlife along the path to “progress.” That we are somehow more important up the food chain than a snail darter is because we are apex predators of a kind that even Darwin didn’t envision. But the evolution of our planet’s flora and fauna tell us that it is all intertwined and losing even one feature of it can lead to dire consequences for us all. To date, we still do not know if the coronavirus which has killed almost five million humans began in a lab or with a bite from a mosquito enjoying the global warming-caused climate change leading to its increase. It is a fact that a warming planet has led to the proliferation of various crop and forest pests causing destruction even a fire cannot cause.

What is so infuriating to me on a personal level is that I often saw and heard birds next to our home while I was growing up. We had downy, pileated and ivory-billed woodpeckers that came to peck our fence and fragrant locust trees every morning and whippoorwills with their distinctive song to sing to us from the woods adjacent to our home every evening. They disappeared after a few seasons, thanks to our local municipality’s overzealousness in mosquito control via spraying DDT all over the creek and surrounding woods in front of our home. DDT weakened the shells of birds’ eggs, so that when the mother sat upon them, they broke. Next went the salamanders, minnows, frogs, snakes, snapping and colorful box turtles and crawdads. The creek had been fed by an underground spring which meant it was a true water source worth protecting. Soon, our formerly vibrant creek was dead. The surrounding trees were native persimmons and tulip trees, now gone, and only the largest sycamore I have ever seen still stands to this day.

Change must not include habitat destruction; but sadly, it often does. We are supposed to be stewards of this planet, a kind of caretaker to the natural world, as the planet does not belong to the wealthy few who can afford to close off a public beach for their own pleasure. By itself, the earth cannot defend against a logging company chewing away at old-growth trees or keep drilled natural gas or oil from poisoning an entire ocean. And it does require us to be vigilant in our protection of her. When we aren’t careful, we lose the songs of the woods, the creatures that trust us to keep their habitats safe, the beauty of a lush land full of bounty and the scent of wild dog roses in May. This planet was not meant to be a home to memories of what once was. It was meant to be a living monument to our ability as humans to save her for the following generations. Even if it is only a fable, the story of Noah offers us a clear warning to protect the inhabitants of this planet and not just humans. Even Biblical warnings were meant to be heeded.

About the Author
Rachel Grenadier was an olah from the Commonwealth of Virginia in 2003 who returned to the United States in 2015. She really wanted to stay in Israel, but decided that having family members nearby was better for her health than a bunch of devoted, but crazed, Israeli friends who kept telling her hummous would cure her terminal heart condition. She has her B.A. and M.A. from George Mason University in Virginia and is the author of two books: the autobiographical "Israeli Men and Other Disasters" and "Kishon: The Story of Israel's Naval Commandoes and their Fight for Justice". She is now living in Virginia with her three Israeli psychologically-challenged cats and yet, denies being a "hoarder".
Related Topics
Related Posts
Comments