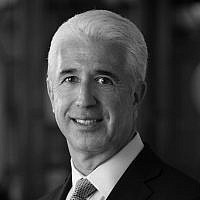 The Blogs
Aron U. Raskas
Apply for a Blog
Please note that the posts on The Blogs are contributed by third parties. The opinions, facts and any media content in them are presented solely by the authors, and neither The Times of Israel nor its partners assume any responsibility for them. Please contact us in case of abuse. In case of abuse,
Report this post.

“For we defeat death, not by living forever but by living by values that live forever.” — Rabbi Jonathan Sacks, Rosh Hashana Machzor

In the face of death, words generally are inadequate. But then there are words — so brilliantly conceived, tenderly expressed and lovingly arranged — that transcend life itself. The singular eloquence of Rabbi Lord Jonathan Sacks, of blessed memory, may be the best tribute to his remarkable life.

Rabbi Sacks relentlessly recognized that “the greatest choice we will ever make is how we use the brief time we are given in this life.” For “God calls to us, each of us, here where we are, this person, in this situation, at this time, saying: there is an act only you can do, a situation only you can address, a moment that, if not seized, may never come again. God commands in generalities but calls in particulars. He knows our gifts and He knows the needs of the world. That is why we are here. There is an act only we can do, and only at this time, and that is our task. The sum of these tasks is the meaning of our life, the purpose of our existence, the story we are called on to write.”

Few have written a story more extraordinary and influential than Rabbi Sacks.

“We are made by what we make.”

Rabbi Sacks knew that, in Judaism, “the highest form of leadership is teaching.” He taught the masses, created leaders and inspired people to faith. He recognized that “great leaders do not create followers; they create leaders. They share their inspiration. They give up their spirit to others.”

Rabbi Sacks led “because there is work to do, there are people in need, there is injustice to be fought, there is wrong to be righted, there are problems to be solved and challenges ahead.” Like the Prophets, “without relieving people of their responsibility,” Rabbi Sacks “gave them a vision and a hope.” He “spoke difficult, challenging truths, and did so with the passion that still has the power to inspire the better angels of our nature.”

His leadership was unassuming, even as he rose to great heights. He understood that, “for us, as for God, greatness is humility. The more we look up to others, the higher we stand.”

“Those who teach people to see, feel, and act differently, who enlarge the moral horizons of humankind, are rare indeed. Of these, Moses was the greatest.” Rabbi Sacks, by this standard, was certainly one of the greatest of modern times.

Rabbi Sacks never sought power, yet his influence was global and profound. He knew that “the use of power diminishes others; the exercise of influence enlarges them. That is one of Judaism’s most humanizing truths. Not all of us have power, but we are all capable of being an influence for good.”

It was obvious to him that “sharing your influence with someone else does not mean you have less; you have more. When we use the flame of a candle to light another candle, the first is not diminished. There is now, simply, more light.” Rabbi Sacks illuminated the globe through his influence.

Rabbi Sacks was, and will remain, the clarion voice of Judaism to the world. He realized that “faith does not hide behind high walls.” Yet, “religious Jews for the most part have not engaged with the wider conversation of humankind” and “there has been little of the intellectual conviction of Moses or the passionate universalism of Isaiah.” Because he “truly believe[d] that the God of creation is also the God of revelation,” he understood that “in principle there can be no contradiction between scientific truth and the truth of Torah.” Demonstrating this was, for him, “one of the great tasks of Jewry in our time.”

It is, he said, “one of the most important truths Judaism offers the world: Humanity is formed out of our commonalities and differences. Our differences shape our identity. Our commonalities form our humanity. We are neither completely different, nor all the same. If we were completely different, we could not communicate. If we were all alike, we would have nothing to say. Our differences matter. But so too does the truth that despite our religious differences, we share a common humanity.”

Rabbi Sacks understood that “religion acquires influence when it relinquishes power. It is then that it takes its place. . . in the real lives of ordinary men and women who become extraordinary when brushed by the wings of eternity.” His became “the voice of the voiceless, the conscience of the community, the perennial reminder that there are moral limits of power and that the task of the state is to serve the people, not the people the state.”

For Rabbi Sacks, the journey of the Jewish people began long ago, and the teachings along the way are eternal. “Egypt was, for the Israelites, the school of the soul. They knew what it was like to be on the receiving end of absolute power… They had been rescued by the Creator of Heaven and Earth who . . . made a covenant with them, not for His sake but for their theirs, inviting them under His sovereignty to build a society that would use their God-given freedom to honor the liberty of others.”

Therefore, he taught, “the ideal society is one formed by covenant, in which we each accept responsibility for the fate of the nation… Societies where everyone is valued, where everyone has dignity, where there may be economic differences but no class distinctions, where no one is so poor as to be deprived of the essentials of existence, where responsibility is not delegated up or down but distributed throughout the population, where children are precious, the elderly respected, where education is the highest priority, and where no one stands aside from their duties to the nation as a whole – such societies are morally strong even if they are small and outnumbered.”

That, Rabbi Sacks taught the world, “is the Jewish faith. That is what Israel, the people, the land and their story mean.”

Rabbi Sacks made the lessons of Judaism relevant by emphasizing that “there is in Judaism an unbreakable connection between faith and the building of a moral and compassionate social order. Only the belief that every human, as the image of God, has non-negotiable and inalienable dignity, gives us the power and the clarity to overcome the instinctive will to power that has divided most of humanity for most of its history into the rulers and the ruled, the powerful and the powerless.”

For Rabbi Sacks, Judaism was “not just poetry but also prose, not just a fire of romantic love but the daily kindnesses of a successful marriage, not just an exalted faith in the transcendent God but the way it takes faith and translates it into everyday life.” Judaism is, as he observed in the language of James Joyce, “a series of epiphanies of the ordinary.” He knew that “we encounter God not just in the thunder and lightning of Sinai but every morning and evening in ritual and routine. That is what life is and what faith transfigures.”

Rabbi Sacks challenged us to be great. “The question God asks us is not, ‘Are you perfect?’ But ‘Can you grow?’” Even if we are not yet great, “we are summoned to greatness, and we can change. We can live lives of moral beauty and spiritual depth. We can open our eyes to the presence of God around us, incline our inner ear to the voice of God within us. We can bring blessings into other people’s lives.”

He was both a servant of God and at ease with Him. “The recognition that counts,” he said, “is our reflection in the eyes of God. He loves us for what we are, and what we could become. He loves the good in us, not the successful or persuasive or charismatic. He ignores the image we try to project because He knows us from within.”

Rabbi Sacks undoubtedly drew the fortitude to persevere because he was always attuned to “the voice within us that says, ‘With Me, you do not have to pretend. I know you. I knew you before you were born. I know you because I made you, and I made you because I need you – or more precisely, because the world needs you. There is a task only you can do. Now, therefore, be strong and do it. You need not seek praise, nor shall you be deflected by criticism, for I will be with you every step of the way. When you feel most alone, that is when I will be the closest.’”

To watch him – particularly with family, friends, children and music – was to witness “joy,” that which “we feel when we know that it is a privilege simply to be alive, inhaling the intoxicating beauty of this moment amidst the profusion of nature, the teaming diversity of life, and the sense of communion with those many others with whom we share history and a hope.”

He understood that “what redeems life and etches it with the charisma of grace is joy: joy in your work, joy in your marriage, and joy in the simple pleasures of life.” Because “joy lives in the moment. It asks no questions about tomorrow. It celebrates the power of now… It knows that yesterday has gone and tomorrow is unknown. It does not ask what was or will be. It makes no calculations. It is a state of radical thankfulness for the gift of being.”

Joy, he wrote, “defeats the fear of death, because it lifts us beyond the self, the insistent, interminable ‘I.’ Joy is something we share with others. Joy is gratitude for the gift of life that we feel in the presence of the Giver of life.” Thus, “we become eternal,” he said, “not by constructing buildings, but by opening ourselves up, making ourselves vulnerable, to the Eternal, to God Himself.”

Rabbi Sacks lived his life with the “very knowledge that we will not live forever, that we are here for all too short a time, that the world will continue after us,” and that “charges us with our most compelling energies.” And in the end, “death gives meaning to life as a frame gives shape to a picture, as the last page gives structure to a story, as the closing chord gives form to the symphony.”

Rabbi Sacks knew that he “did not begin the story we inherit,” and that he would “leave it in God’s time to those who are our heirs. But to have had a part in it, to spend our hour on the stage, faithful to those who came before us and preparing those who will follow us to play their role in moving humanity one more step closer to redemption – that is life at its highest, knowing that we will not see the fruits of our labours but knowing that what we have planted, others will reap, and what we have begun others will complete.”

May we honor his legacy and do just that.

Sources (in order of quotation):

About the Author
Aron U. Raskas is an attorney in Miami, Florida.
Related Topics
Related Posts
Comments