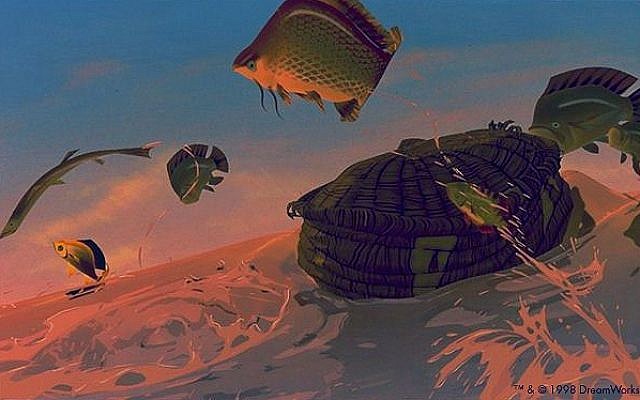 She is one of the most unexpected heroes of the Hebrew Bible. Without her, Moses might not have lived. The whole story of the exodus would have been different. Yet she was not an Israelite. She had nothing to gain, and everything to lose, by her courage. Yet she seems to have had no doubt, experienced no misgivings, made no hesitation. If it was Pharaoh who afflicted the children of Israel, it was another member of his own family who saved the decisive vestige of hope: Pharaoh’s daughter. Recall the context. Pharaoh had decreed death for every male Israelite child. Yocheved, Amram’s wife, had a baby boy. For three months she was able to conceal his existence, but no longer. Fearing his certain death if she kept him, she set him afloat on the Nile in a basket, hoping against hope that someone might see him and take pity on him. This is what follows:

Pharaoh’s daughter went to bathe in the Nile, while her maids walked along the Nile’s edge. She saw the box in the reeds and sent her slave-girl to fetch it. Opening it, she saw the boy. The child began to cry, and she had pity on it. “This is one of the Hebrew boys,” she said (Ex. 2:6).

Note the sequence. First she sees that it is a child and has pity on it. A natural, human, compassionate reaction. Only then does it dawn on her who the child must be. Who else would abandon a child? She remembers her father’s decree against the Hebrews. Instantly, the situation has changed. To save the baby would mean disobeying the royal command. That would be serious enough for an ordinary Egyptian; doubly so for a member of the royal family.[1]

Nor is she alone when the event happens. Her maids are with her; her slave-girl is standing beside her. She must face the risk that one of them, in a fit of pique, or even mere gossip, will tell someone about it. Rumors flourish in royal courts. Yet she does not shift her ground. She does not tell one of her servants to take the baby and hide it with a family far away. She has the courage of her compassion. She does not flinch. Now something extraordinary happens:

The simplicity with which this is narrated conceals the astonishing nature of this encounter. First, how does a child – not just a child, but a member of a persecuted people – have the audacity to address a princess? There is no elaborate preamble, no “your royal highness” or any other formality of the kind we are familiar with elsewhere in biblical narrative. They seem to speak as equals.

Equally pointed are the words left unsaid. “You know and I know,” Moses’ sister implies, “who this child is; he is my baby brother.” She proposes a plan brilliant in its simplicity. If the real mother is able to keep the child in her home to nurse him, we both minimize the danger. You will not have to explain to the court how this child has suddenly appeared.

We will be spared the risk of bringing him up: we can say the child is not a Hebrew, and that the mother is not the mother but only a nurse. Miriam’s ingenuity is matched by Pharaoh’s daughter’s instant agreement. She knows; she understands; she gives her consent.

Then comes the final surprise:

When the child matured, [his mother] brought him to Pharaoh’s daughter. She adopted him as her own son, and named him Moses. “I bore him from the water,” she said. (Ex. 2:10)

Pharaoh’s daughter did not simply have a moment’s compassion. She has not forgotten the child. Nor has the passage of time diminished her sense of responsibility. Not only does she remain committed to his welfare; she adopts the riskiest of strategies. She will adopt him and bring him up as her own son.[2] This is courage of a high order.

Yet the single most surprising detail comes in the last sentence. In the Torah, it is parents who give a child its name, and in the case of a special individual, God Himself. It is God who gives the name Isaac to the first Jewish child; God’s angel who gives Jacob the name Israel; God who changes the names of Abram and Sarai to Abraham and Sarah. We have already encountered one adoptive name – Tzafenat Pa’neaĥ – the name by which Joseph was known in Egypt; yet Joseph remains Joseph. How surpassingly strange that the hero of the exodus, greatest of all the prophets, should bear not the name Amram and Yocheved have undoubtedly used thus far, but the one given to him by his adoptive mother, an Egyptian princess. A midrash draws our attention to the fact:

This is the reward for those who do kindness. Although Moses had many names, the only one by which he is known in the whole Torah is the one given to him by the daughter of Pharaoh. Even the Holy One, blessed be He, did not call him by any other name.[3]

Indeed Moshe – Meses – is an Egyptian name, meaning “child,” as in Ramses (which means child of Ra; Ra was the greatest of the Egyptian gods).

Who then was Pharaoh’s daughter? Nowhere is she explicitly named. However the First Book of Chronicles (4:18) mentions a daughter of Pharaoh, named Bitya, and it was she the sages identified as the woman who saved Moses. The name Bitya (sometimes rendered as Batya) means “the daughter of God.” From this, the sages drew one of their most striking lessons: “The Holy One, blessed be He, said to her: ‘Moses was not your son, yet you called him your son. You are not My daughter, but I shall call you My daughter.’”[4] They added that she was one of the few people (tradition names nine) who were so righteous that they entered paradise in their lifetime.[5]

Instead of “Pharaoh’s daughter,” read “Hitler’s daughter” or “Stalin’s daughter” and we see what is at stake. Tyranny cannot destroy humanity. Moral courage can sometimes be found in the heart of darkness. That the Torah itself tells the story the way it does has enormous implications. It means that when it comes to people, we must never generalize, never stereotype. The Egyptians were not all evil: even from Pharaoh himself, a heroine was born. Nothing could signal more powerfully that the Torah is not an ethnocentric text; that we must recognize virtue wherever we find it, even among our enemies; and that the basic core of human values – humanity, compassion, courage – is truly universal. Holiness may not be; goodness is.

Outside Yad Vashem, the Holocaust Memorial in Jerusalem, is an avenue dedicated to righteous gentiles. Pharaoh’s daughter is a supreme symbol of what they did and what they were. I, for one, am profoundly moved by that encounter on the banks of the Nile between an Egyptian princess and a young Israelite child, Moses’ sister Miriam. The contrast between them – in terms of age, culture, status and power – could not be greater. Yet their deep humanity bridges all the differences, all the distance. Two heroines. May they inspire us.

[1] “Seeing that she [Pharaoh’s daughter] wanted to save Moses, they [her handmaids] said to her, ‘Mistress, it is customary that when a king of flesh and blood issues a decree, even if the whole world does not fulfil it, at least his children and the members of his household fulfill it. Yet you transgress your father’s decree!’” (Sotah 12b)

[1] I am indebted for this entire line of thought to Mr. Joshua Rowe of Manchester. Others have pointed out that a similar idea was subsequently and independantly written by Rav Yoel Bin Nun in volume one of Megadim.

[3] Abarbanel to Bereishit 25:28. Isaac loved Esau, Abarbanel argues, because he was the firstborn. Isaac believed, therefore, that he would inherit the divine blessing and covenant. From her oracle, Rebecca knew otherwise. On this reading, the drama unfolded because of a failure of communication between husband and wife.