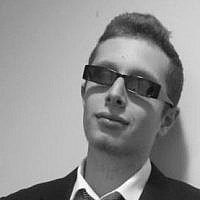 The Blogs
Aryeh Dergel
Apply for a Blog
Advertisement
Please note that the posts on The Blogs are contributed by third parties. The opinions, facts and any media content in them are presented solely by the authors, and neither The Times of Israel nor its partners assume any responsibility for them. Please contact us in case of abuse. In case of abuse,
Report this post.

Everything is finally coming together. Almost a year ago now I told my parents that I was really going to make aliyah – that seems like a lifetime ago now. Since then, I have put so much work towards my goal and I am happy to finally be able to announce that IT’S OFFICIAL! Just this morning I got my flight confirmation from Nefesh b’Nefesh and I don’t think I’ve ever felt this excited. Ever. As I read through the flight information I realized that, wow, dreams do come true.

The actual flight process will likely take more than 24 hours, luckily sleep is for quitters. The morning of August 12th at 9:15 is check-in, the Nefesh b’Nefesh charter flight leaves at 1:15 in the afternoon. Sometime in between there will be a farewell ceremony which I know will involve lots of tears, but tears of joy. The tears of parents sending off their oldest son to chase his dream, the tears of a son leaving his parents to go make his own lot in life. Pretty emotional stuff. Then there’s the flight which will bring me and a few hundred other olim to our new home. The idea of having that many of us, all from different backgrounds, all of us with different stories, ALL OF US making the same move. It’s incredible.  Then after the flight there’s a welcome ceremony and more paperwork and boom! I’ll be Israeli. How awesome is that?

This entire process was made so much easier by the great people over at Nefesh b’Nefesh (applause), my loving and supportive parents, (more applause) and my incredible family both here in North America and in the homeland, (lots more applause) my friends and family friends, (more applause) and of course everybody out there who thinks they know what they’re talking about (no applause here, you guys are annoying). I honestly did not know how well this would turn out, but thank God it worked out how it did.

My parents are both incredibly proud of me, my younger brothers are thinking of following me in due time, and my friends here are sad to see me go (or so I’d like to think). After months of trying to figure out how best to undertake this adventure of a lifetime, I figured out what I am going to be doing thanks to my shaliach aliyah, Asher Israeli.

My new plan for aliyah is to fly home then do Kibbutz Ulpan on Kibbutz Sde Eliyahu for five months. After ulpan I will join the Israel Defense Force and serve my country and my nation, just like I have wanted to do for the longest time.

It’s hard to describe what I’m feeling now that I’m finally making the move. It’s hard to explain to someone how you have an intense feeling of patriotism towards a country you weren’t born in and you have never lived in. it’s equally hard to explain how I can move six thousand miles from everything I’ve ever known, just like that. Despite the fact that if you think about it that way I might be crazy, I have never felt so right doing anything.  But I suppose that’s me. The little Zionist that could.

About the Author
Aryeh Dergel is 17 years old and currently lives in Spring Valley, NY. He will be making aliyah in august of 2013.
Related Topics
Related Posts
Comments