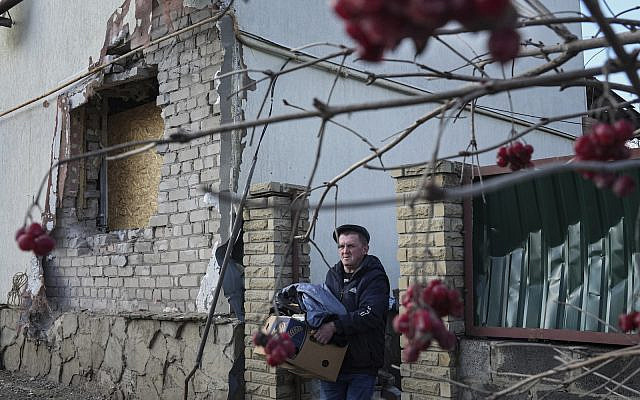 A man takes items out of his house after it was damaged by artillery shelling in Novoluhanske, eastern Ukraine, Wednesday, Feb. 23, 2022. (AP Photo/Evgeniy Maloletka)

As the crisis targeting Ukraine unfolds, with nail-biting tension from day to day, some countries are quietly planning for the prospect of millions of refugees should Moscow launch a full-blown invasion.

While not all surrounding nations would necessarily welcome large numbers seeking safety, and as the refugees themselves would face the daunting prospects of dislocation, anxiety, and uncertainty, for one potential group — Ukrainian Jews — there are much clearer, and more reassuring, possibilities, should they feel compelled to leave.

The reason is simple: Israel exists. It is ready to help any Ukrainian Jews who feel at risk, and it is preparing for their reception and resettlement.

Those Jews would not be compelled to live in temporary, threadbare camps, as could occur elsewhere, nor would they have to wait on endless lines in the hope of being permitted to enter a new country permanently at some later point.

And that, in today’s world, is an essential meaning of Israel. While for some Jews, most notably in the United States, Israel has become little more than a distant land or political hobby, for other Jews, including in Ukraine, Israel represents nothing less than a lifeline, a sanctuary, and a haven.

Alas, it wasn’t always so. When Adolf Hitler gave Jews the chance to leave in the 1930s, there was no Israel. Instead, Jews had to rely on the goodwill of other nations. The result? Perilously few chances to relocate, so Jews, including my parents, were trapped.

When 32 countries assembled in 1938 for the Evian Conference, it was clear that, despite the gathering’s lofty aim of assisting endangered German and Austrian Jews, few were prepared to lift a finger, invoking all kinds of bogus rationales to mask widespread hostility towards Jews. The tragic 1939 saga of the SS St. Louis, carrying more than 900 Jewish refugees, powerfully illustrated the impenetrably high walls Jews faced at the time.

But once Israel was reborn in 1948, Jews no longer had to beg, plead, and cajole to find new homes — whether they were Holocaust survivors stuck in Displaced Persons camps in Germany and Austria, or fleeing violent mobs and chronic persecution in Arab lands, or fearful of the spread of communism and resurgent antisemitism in East Europe.

No, it wasn’t always easy. Israel had few resources at the time and had to focus on ensuring its survival in an unwelcoming region. And there were social tensions among various communities who had lived very different lives prior to their arrival in the Jewish state. But, with time and effort, progress was made. The country’s population grew, its economy developed, social integration occurred, and democratic institutions took root.

Years later, I was a witness to the meaning of Israel for Ethiopian and Soviet Jews. I saw up close the lengths to which Jerusalem went to rescue these beleaguered Jews and offer a new beginning in a land where, as Jews, they would neither be defenseless nor subjected to the whim of ruthless leaders.

This was brought home to me most vividly in January 1991, as Iraqi Scud missiles were being fired at Israel and millions of Israelis were rushing with gas masks again and again to sealed shelters, fearful those missiles carried chemical warheads. I was there. I stood on the tarmac as planes arrived from the USSR with Jews looking to escape Soviet uncertainty.

Israel never closed its doors, even in that fraught time. It never told the would-be arrivals to return another day when all was quiet and no more Scud missiles were raining down. Instead, Israel welcomed them, issued them gas masks and gave them instructions on how to use them, and sent them to absorption centers. There, they would find a place to live, food on the table, language lessons, school for their children, and vocational training — oh, and shelters to rush to when the sirens sounded, signaling more incoming projectiles from Iraq.

In decades of visiting Jewish communities around the world, I frequently witnessed this basic understanding of Israel’s meaning; this recognition that Israel was about way more than a particular policy or leader; this enduring, and often metaphysical, connection to a distant land that wasn’t just another country on the map; and this sense that a day could come when their own security would be jeopardized and Israel might become their new home.

In the US, however, those feelings seem less widespread, more challenged. Perhaps it’s the feeling that America is different, that Jews believe they have found their own version of the Promised Land, that Jews are more protected from the harsh winds of history, or that Israel must behave like a Nordic country to earn their support, even if it’s located in the tumultuous Middle East rather than Scandinavia.

It allows too many American Jews to feel alienated, indifferent, or even hostile, broadly speaking, to the miracle of sovereign redemption, or, more specifically, to the extraordinary, decades-long image of Jews fleeing their homes in Africa, Asia, Europe, and Latin America and creating new lives in an ancient/modern homeland.

There are as many as 300,000 Jews living in Ukraine today. Whatever happens in the weeks and months ahead, they know they don’t have to face the prospect of homelessness. And that’s because, thankfully, Israel is a reality.