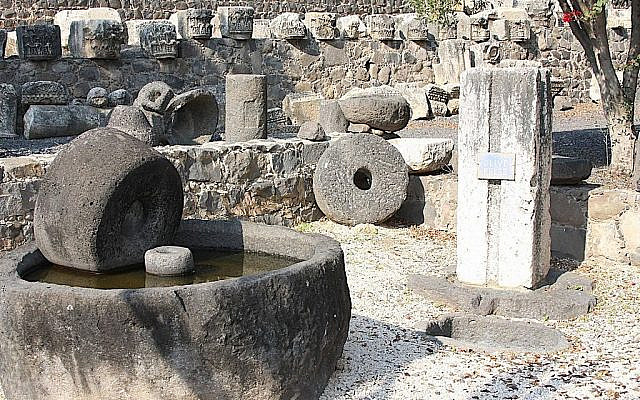 The traditional shape of the menorah, with all its candles in a line standing separate from each other, is a symbol overfull with resonance during this time of social distancing.

In Part 1, I explored the rabbinic reason for this shape: the candles or oil lamps must not overlap like the flames of a m’durah, a campfire. Here, I want to focus on the biblical and ecological reasons for the traditional menorah, or Chanukiyah in modern Hebrew, with eight branches in a line (plus one shamash that is not in that line). Along the way, we’ll encounter some extraordinary legends and insights about Chanukah.

The olive tree and the Temple’s menorah

You probably know that the alignment of the candles in the Chanukiyah imitates the flat tree shape of the seven-branched menorah that stood in the Temple. That would be reason enough for its shape, since we are commemorating the rededication of the Temple. But why does the Torah insist that there be seven branches in one line, “three branches of the menorah on the one side and three branches… on the other side” (Exodus 25:32)?

One reason the Torah gives is that the lamps need to cast their light toward the altar: “and (the priest) will lift her (the menorah’s) lamps and shine light outward from her face” (Exodus 25:37). By setting the flames in one line, the Torah guaranteed that the light cast by the menorah wouldn’t create shadows in the direction it was facing (kind of like setting up lighting for zoom).

The Torah also teaches that the menorah represents a tree, with its branches sculpted with almond flowers with sepals, and of course the menorah was literally lit by a tree, since the fuel had to be very pure olive oil. The almond flower as the first blooming tree is a symbol of spring and awakening. But the olive oil is simply (and magnificently) a staple of the land of Israel, and the best thing you could use to get the best light.

This year I learned some new things about how olive oil gets made in Israel and Palestine. The trees may be finished growing their olives by Sukkot, but the olives are not harvested until after the first rain falls on them – typically around the end of Sukkot or a bit after. They are harvested over a month’s time, then they mellow. After that they are crushed in an olive press to make oil, and the oil must sit for a few weeks til the sediment settles out.

Since Chanukah falls exactly two full moons plus ten days after the end of Sukkot, we celebrate lighting the menorah or Chanukiyah right around when the first oil pressed from the new harvest could be used.

A festival of fire

The rabbinic story of Chanukah tells us that the miracle of the holiday was that the oil lasted eight days. But during the Maccabean revolt, the work of harvesting the olives, along with Sukkot and the other fall harvests, became difficult or impossible because of the war. Because of that, it was an even bigger a miracle to find any oil at all.

In fact, the second book of Maccabees (which is not in our Bible but was preserved by the church) tells us there’s a lot more going on with fire on Chanukah. It calls Chanukah the festival of fire, explaining that when the first Temple was destroyed, the priests who were sent into exile hid fire from the altar in a cave and sealed it off. When the exiles came back from Babylonia 70 years later, Nehemiah sent the descendants of those priests to find the fire that was hidden years before. They found the cave, and inside they found a thick liquid, which they spread on the altar on the 25th of Kislev.

When the sun came out, the liquid ignited. That was the miracle, says 2 Maccabees, rather than an eight-day long burn of one-day’s oil. And not only that: 2 Maccabees also says we are commemorating the fire that came down from heaven when Solomon inaugurated the altar of the first Temple, which happened over the eight days of Sukkot and Sh’mini Atseret, the eighth day when fire fell from heaven, hundreds of years before. That fire was the same passed down by the priests through the generations and then hidden.

2 Maccabees doubles down on the symbolism of the eight days, explaining that the Hasmonean festival of fire was also a redo of the eight days of Sukkot because Sukkot couldn’t be celebrated during the war. (Hasmonean is from the actual family name of Judah the Maccabee.) That makes two explanations from the Maccabees for why Chanukah is about fire and two for why it needed to be eight-days long. That’s in addition to the rabbinic reason for both, that the oil burned for eight days.

All these explanations for Chanukah involve fire – but not the same kind of fire. Remember that for the rabbis, Chanukah was a festival of lights, chag urim, in the plural, celebrating the fire of the menorah, where the flames were separated and not at all “like a m’durah.” The Hasmoneans, however, saw Chanukah as a celebration of a different fire, the fire of the altar. That fire was by definition a m’durah – a cookfire or campfire, kindled to be used either to burn up a sacrificial animal’s meat in smoke or to cook it for eating by the priests.

The flame of a ner, an oil lamp or candle (which of course is the root of the word menorah), was kindled for light, not for heat. The rabbis made a point of this difference, not only by saying the flames couldn’t look like a m’durah, but also by saying that the Chanukah lights were holy and could not be used for any utilitarian purpose. That’s why we have the shamash: to provide light that has not been sanctified and can therefore be used.

Both the rabbinic and Maccabean stories give us an historical reason to celebrate the new olive harvest with fire, but they embody opposite intentions. Who was right? How many quasi-historical fire miracles do we need to conjure to justify celebrating Chanukah? And did the festival really originate in any of these miracle stories?

The darkest night and the miracle

I never get tired of pointing out the fact that the darkest night of the year is not actually the winter solstice, but rather the fifth night of Chanukah, the moonless night before or nearest to the winter solstice. That’s what Chanukah is about, no matter which version of history one pays attention to.

The irrefutable miracle is also one embedded in Nature rather than history. That’s the miracle of the olive harvest itself, and the wonder of a world where beautiful tree grows fruit from the sun’s light that can be harvested to give us oil so that we can create our own light.

And along with that miracle is a miracle specific to the ecology of the land of Israel and the Mediterranean: the oil from the new harvest is ready just in time for us ignite it to create light in the outer Temple of the world in the darkest season, when we need it most. These natural miracles would be enough reason to celebrate Chanukah as a festival, even without the miracle of the fire that fell from heaven or the “oil that burned quite slowly” (as Jon Stewart phrased it in a duet with Stephen Colbert at 2:28).

Finding the holy in this darkest year

So our menorah, our Chanukiyah, is not a m’durah, not an attempt to overcome the dark with a blazing fire, but a bridge of light composed of individual flames, like seeds of light. This bridge helps us cross over that darkest night of the sun’s cycle in the Northern hemisphere, without denying or disrespecting the dark.

But if you want to honor both rabbinic and Hasmonean traditions—and if you want to stay warm while doing rituals outside because of COVID—Jewish law says you can build a m’durah to use for your shamash. So bring out your firepits!

This year, after all, we need all the light we can get, as we pass through this time that is dark in so many more ways than the winter solstice. We are in a time of people trying to undermine the U.S. election which we can only hope will end January 20th. We are in a time when so many are struggling with isolation and anxiety from COVID, as they have been for most of this year. And a time when we are struggling more and more with the chaos of climate disruption, which will continue for years to come.

But never forget that there is also holy darkness. Darkness that can hold peace, that can bring freedom, that can make our small lights shine brighter. Each olive its own little package of light, each person their own source of illumination. We don’t need to join together and make one big flame, and in any case this year we can’t even if we want to. It’s enough, and has to be enough, that we can align ourselves like the candles, that we can synchronize how we shine our own lights from within the darkness, in order to create a space ahead of us without shadows. Just enough to illuminate our journey.

With thanks to Sue Salinger, Shaul Judelman, Sarah Notis, Riqi Kosovske, and other friends who helped me explore these ideas. Read Part 1 here. Find more Chanukah resources, including a Chanukah version of the Ana Bekhoach prayer, on Rabbi Seidenberg’s website neohasid.org here.