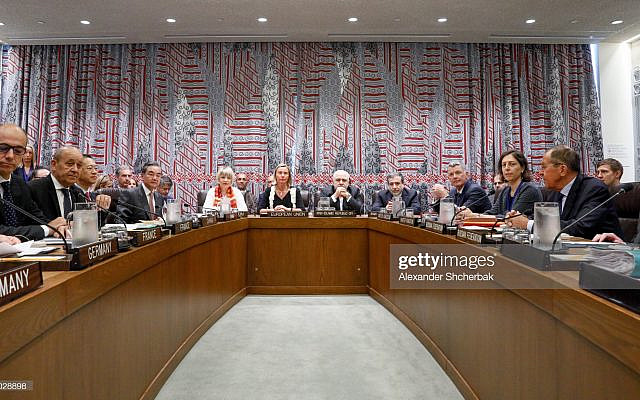 With the renewal of negotiations between Iran and the five permanent members of the U.N. Security Council, plus Germany (P5+1), there is now a second chance to get the Iran nuclear deal right. This time the United States and its negotiating partners should not repeat the mistakes of the 2015 nuclear deal. The people of the Middle East deserve a better deal.

The lessons of the past should serve as a guide to the current negotiations. When the United States led negotiations for a nuclear deal in 2015, one of the guiding hopes for President Barak Obama was that a deal with Iran would make the Middle East a better place.

In December 2014, while the United States was in the midst of negotiations, President Obama said of Iran, “… there’s incredible talent and resources and sophistication inside of Iran and it would be a very successful regional power that was also abiding by international norms and international rules – and that would be good for everybody.”

In spite of his good intentions, President Obama seriously underestimated Iran’s commitment to spreading its revolutionary ideology throughout the region. That is why a new deal with Iran should address Iran’s ongoing support for proxy forces in the Middle East and not relegate this dangerous threat to the realm of “non-nuclear issues” that were not covered by the 2015 nuclear deal.

The 2015 Iran nuclear deal- formally known as the Joint Comprehensive Plan of Action (JCPOA) – gave Iran extensive relief from economic sanctions. Unfortunately, Iran did not use the money to invest in the good and welfare of the Iranian people. Instead, under the leadership of Major General Qassem Soleimani, head of the IRGC Qods Force, Iran used the money to invest in its Middle East proxies, all in the name of “exporting the Islamic Revolution”.

Tragically, the price for Iran’s proxy wars has been paid for by the blood of the people of the Middle East. Everywhere in the region that Iran supports proxy forces there is a failed state and widespread human suffering. In his book Battlegrounds, former U.S. National Security Advisor Lt. General H.R. McMaster wrote, “From 2008 to 2018, Iran spent $140 billion dollars on its military and combat operations abroad.”

When seen in its entirety, the list of proxies supported by Iran is astounding. It includes Hezbollah in Lebanon, Hamas and Palestinian Islamic Jihad in Gaza, Kataib Hezbollah and Asaib Ahl al-Haq in Iraq, the Houthi rebels in Yemen and Iran’s massive economic and military support for the brutal regime of Syrian dictator Bashar al-Assad.

Much of the recent tension between Iran and Israel stems from Iran’s strategic goal of arming its proxies with precision guided missiles in order to surround Israel with a “Ring of Fire” across the wider Middle East.

Last year, columnist Tom Friedman wrote in the New York Times, “That is why Israel has been fighting a shadow war with Iran for the past five years to prevent Tehran from reaching its goal of virtually encircling Israel with proxies in Lebanon, Syria, Iraq and Gaza, all armed with precision guided missiles.”

Following the daring 2018 mission by Israel’s Mossad to obtain the Iran nuclear archives, we now have a different perspective on Iran’s nuclear program.

Prior to 2015, Iranian negotiators consistently denied their ambitions for the development of nuclear weapons. The archives prove beyond a shadow of a doubt that Iran was pursuing nuclear weapons all along. That is why new negotiations must address another major flaw in the 2015 JCPOA in what are referred to as the “sunset clauses” of the deal.

According to the JCPOA, between years 10 and 15 of the deal, the restrictions on Iran’s uranium enrichment activity would “sunset” and be eliminated. After 2030, Iran would be free to build as many centrifuges as it wants and enrich as much uranium as it wants, including at higher levels of purity closer to weapons grade uranium.

All this would open the door for a situation known as “nuclear breakout”, defined as the time it would take a nation to develop enough highly enriched uranium for one nuclear weapon.

With the lifting of restrictions on Iran’s uranium enrichment capacity after 2030, Iran’s “breakout” timeline would be counted in weeks. At that point, no amount of international inspectors would be able to detect and provide adequate warning to prevent nuclear breakout from happening.

2030 is now only nine years away. That is why we should listen to the advice of nuclear weapons experts who actually studied the archives.

The lessons were addressed in an article titled, “The Iranian Nuclear Archive: Implications and Recommendations”. This excellent analysis was co-authored by nuclear weapons experts David Albright, the founder and director of the Institute for Science and International Security (ISIS), Olli Heinonen, the former Deputy Director of the International Atomic Energy Agency (IAEA) and Andrea Stricker, a Research Fellow at the Foundation for Defense of Democracies (FDD).

In their 2019 article they wrote, “The revelations from the archive should motivate the United States and its allies to push harder to fix the flaws in the Iran nuclear deal or reach a replacement agreement. Iran will be well positioned to make nuclear weapons at a time of its choosing once the nuclear deal limitations end, and could also make them much more quickly than the world previously assessed.”

A new and improved JCPOA would eliminate the “sunset provisions”, the fatal flaw of the 2015 Iran nuclear deal.

In an open letter to the Biden administration from the non-partisan advocacy group, United Against Nuclear Iran (UANI), the issue of uranium enrichment was addressed along with the other flaws of the JCPOA. The letter stated, “We must return to the principle of zero enrichment or reprocessing or risk a nuclear arms race in the Middle East.”

In the six years that have passed since the JCPOA was made, the world has learned a lot about Iran and its intentions for nuclear weapons and the wider Middle East. That is why the United States and its negotiating partners should take to heart the wisdom of Spanish philosopher George Santayana who famously said, “Those who cannot remember the past are condemned to repeat it.”

The people of the Middle East not only remember the past, they continue to face threats from Iran and its dangerous ambitions. That is why they deserve a better future through a better Iran nuclear deal.