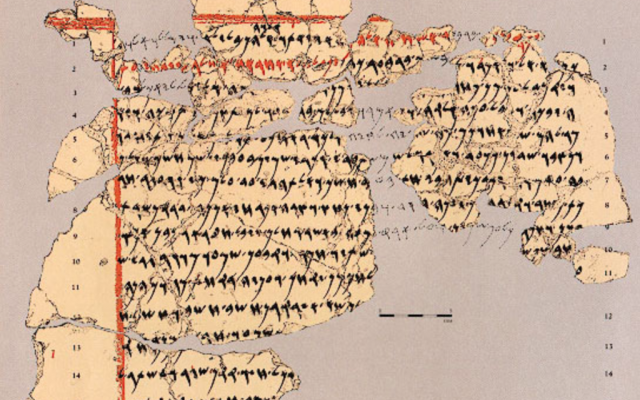 The prospect of unearthing a lost religious text from the ancient world is tantalizing. Very few books have survived the millennia – to no surprise. The challenges of hand transcription (including expense!) meant books were rare to begin with. When that underlying scarcity was combined with the prevailing illiteracy, and, worse, natural disasters, war, and simply the vicissitudes of time, it is no small wonder that what remains of ancient books in the modern world is not extensive.

Yet the Torah itself hints to at least several of the works that were once extant.

This week’s parsha, Parshat Balak, for example, includes “the passage of Balaam.” Granted, the Torah portion opens with the story of the non-Jewish prophet Balaam and the injunction of King Balak of Moab to curse the Jews. But in and of itself, that narrative does not suggest an extra-canonical text. Rather, the identification of such a work must be credited to the Talmud (Bava Batra 14b), where Moses is acclaimed as the one who wrote “his book” (the Five Books of the Torah), the Book of Job (a fascinating detail to consider another time), and, indeed, “the passage of Balaam.”

At first blush, the Talmud is repeating itself. The story of Balaam is in Numbers, the fourth of those Five Books of the Torah that are called Moses’ book to begin with. Clearly, Moses wrote it!

But since the talmudic sages are presumed unlikely to have made such an error, the commentaries make the effort to figure out what other text could Moses have written, such that it would get an independent mention in this way.

Rashi considers Balaam’s story as a whole. He points out that the only way Moses could even have known of the goings-on between Balak and Balaam, let alone Balaam’s prophetic encounter with the donkey, was via his own prophecy. Balak and Balaam were non-Jews, and they were at some remove from the journeys recounted in the biblical text, beyond the purview of the Israelites in the wilderness. Moreover, it is reasonable to assume that Balak and Balaam were not speaking Hebrew, which means that the account recorded in the Torah is not a transcription of their dialogue, but translation by Moses. Thus, Moses “wrote” the passage of Balaam. And, suggests Ralbag, in order to ensure that the passage would be treated as holy as the rest of the Torah, and not some mere concoction by Moses, the Talmud reiterates the attribution to Moses, to stress that the fact that it is about non-Jews is irrelevant to its importance. After all, it was necessarily dictated to Moses by God.

The Ritva (Rabbi Yom Tov ben Avraham of Seville) suggests that there was an entirely other work, and independent text, that was authored by Moses, and in the possession of the rabbis of the Talmud. And then, subsequently, the work was lost. Beyond the passage in Bava Batra, a “note of Balaam” is mentioned in the tractate Sanhedrin (106), lending credence to the Ritva’s position.

But all of these approaches are speculation – attempts to square the Talmud’s claim regarding Moses’ authorship with the familiar texts.

What may go beyond conjecture is an ancient text that was discovered in Jordan in 1967, at Deir ‘Alla (KAI 312), currently at the Jordan Archaeological Museum. It is significant with regard to the identification of the “passage of Balaam” because it mentions, explicitly, Balaam ben Be’or. Perhaps this artifact is indeed the text referred to by the sages in the Talmud!

It should be noted that evidence for some of the biblical personalities – from the Prophets, in particular – has been excavated in the many archaeological efforts in the holy land, Balaam is the only one (so far) whose existence has been corroborated definitively by a find of archaeology.

Another “book” that begs identification and discovery is mentioned in Numbers: God’s Wars (21:14). Rabbi Avraham ibn Ezra explains there that these words refer to an ancient text that described the wars fought by the Israelites, including their victory songs. It is long vanished.

The Book of Joshua (10:13) mentions, “Sefer HaYashar,” the book of the straight, or upright. Perhaps it refers to one (Genesis, Numbers, and Deuteronomy are good contenders) or all of the books of the Torah – for the upright, indeed. As a separate text, none is known to fit the bill, though a Hebrew book that purported to be the missing Sefer HaYashar was published in 1652 (translated to English in 1840). It did not pass muster, however, as thorough examination of the language of the work led experts to conclude that it was a forgery – that is, not the work mention in Joshua.

Another significant mention of an extra-biblical work of the biblical era is “The Annals of the Kings of Judah.” Mentioned throughout the Book of Kings, we have no such work. And beyond the biblical references, the Midrash posits the historical existence of several works for which we have no proof. Specifically, Maimonides maintained that Abraham wrote a book to spread monotheism. Classical midrash recounts how Jacob studied at the yeshiva of Shem and Ever – which surely had some scrolls from which the students studied. And similarly, the midrash speaks of written documents that belonged to the Israelites during their sojourn in Egypt.

One can only speculate as to the influence that sacred writings that did not survive might have had on modern religion. The Dead Sea Scrolls make the point: they have had an outsized impact on contemporary understanding of the range of practice and religiosity in the lives of those who lived in that era.

What should surprise us, therefore, is the durability of text of the Torah, the scrolls of which have survived the ages and grace our synagogues today!

About the Author
Dr. Chana Tannenbaum lectures at Bar Ilan University, Michlelet Herzog, and Matan. She has worked as a Jewish educator, in teaching and administration, for more than 30 years. She earned her doctorate at Yeshiva University, where she was also the recipient of the Baumel award, given to the most outstanding faculty member throughout Yeshiva University. Dr. Tannenbaum made aliyah with her family in 1997, moving to Nof Ayalon.
Related Topics
Related Posts